The above flow chart is not far wrong! WD-40 and duct tape are essential items that should be found in every sailor's toolbox. In moist marine environments, WD-40's water-displacing and rust-killing properties are legendary. As the flow chart alludes, it's also useful lubricant, although no good for lubricating chains or gears (including winches), as it lacks sufficient oil. Duct tape is handy for everything from patching plumbing leaks to temporary sail repairs.


During my last sailing trip I put the latter to good use. On the very first day of our 5-day trip, I had the misfortune to discover that Arriba's effluent macerator pump had failed. With 6 people on board our holding tank was already full, and I had no way of discharging it. Yikes! My workaround was to temporarily bypass the faulty pump using, you guessed it, duct tape. 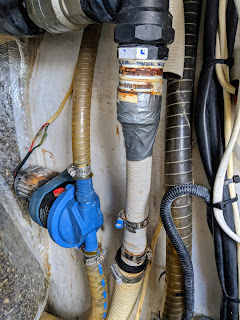 I thought about whether I should "go public" with this revelation. Pumping black water effluent overboard that has not been macerated does not comply with EPA rules. Then again, forcing the crew to poop in a bucket, and throw the contents overboard would not have been very nice, and no better environmentally. At least with my workaround I could ensure we were at least 3 nautical miles offshore before offloading. Hopefully it encourages a fellow yachtie to check their pump is in working order before embarking on a big trip (offshore of course).

Back on shore I promptly purchased a new macerator pump. I selected the Jabsco 18590 Series, which features "run dry"protection. I think what killed my previous pump was over exuberant pressing of the switch, allowing it to run dry and fry itself. Some folks just love pressing buttons!

For some inexplicable reason, the old pump had been installed 40cm (16") below the holding tank's output, at about sea level. The pump was then discharged through a long loop rising a similar distance above sea level. A bit of Googling revealed that this was intended to be "vented loop", to prevent water siphoning backwards via the thru-hull into the boat. The Jabsco manual has the following diagram: 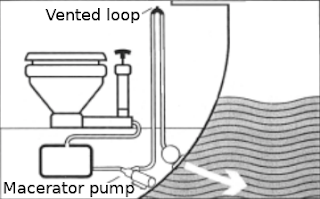 The manual also has this dire notice:

The discharge thru-hull may be positioned below the waterline only if the discharge hose has a vented loop fitting installed at least 8" above the water- line at all angles of heel or trim.

The trouble is Arriba's loop was not vented. Unless it was of pin-prick dimensions, it lacked a valve at the top of the loop, making it of limited use. As mentioned, Arriba's holding tank outlet is located well above sea level and there is no need to put the pump below sea level. In short, there is no need for a vented loop as water cannot magically flow uphill, siphon or no siphon. My new installation shown below is much cleaner, without compromising seaworthiness. 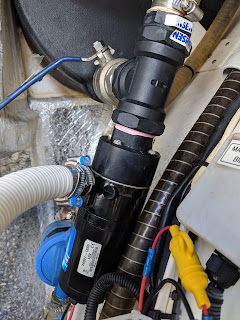 As a bonus, by screwing the pump intake directly into the holding tank outlet I've eliminated one of the hoses, the most likely cause of failure. In case you're wondering, the top end of the "T" goes to the pump-out fitting, which is about 1m (39") above sea level. Nothing is going that far uphill without some serious sucking!

The thru-hull and holding tank valves should of course both be left in the closed position when not in use. Consult a qualified marine plumber if you are in doubt.