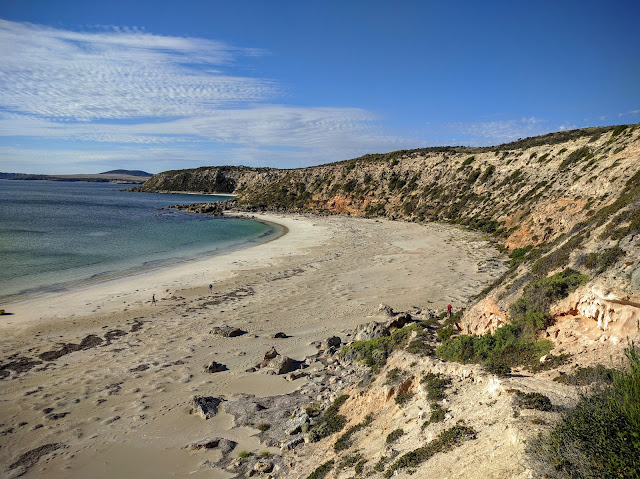 Continued from Adelaide to Coffin Bay.

Once past Pt Sir Isaac we were sailing in the semi-protected waters of outer Coffin Bay. Tonight we planned to anchor in the outer bay before riding the tide into the inner bay tomorrow. There are several anchorages in the outer bay to choose from, depending on the wind direction. Seasick Bay (34°25.94'S 135°12.69'E) despite the name, is a safe anchorage for winds from the southern quarter (SE thru SW). Morgans Landing (34°29.7'S 135°13.1'E) near the fabulous Seven Mile Beach on the western side of the bay is sheltered from the S thru the W to the NW. There is also a campground here. The cove just south of Frenchman Bluff (34°25.4'S 135°21.9'E) is sheltered from the NW thru E. However with wind blowing from the SE and forecast to swing to the NE, Gallipoli Beach (34°27.94'S 135°23.35'E), on the eastern side of the bay, would be our choice.

Gallipoli Beach is not mentioned in any SA cruising guides but I'm really glad we visited. It's a stunning beach (photos top and below). It was the location of the 1981 movie as it bears a strong similarity to Anzac Cove on the Gallipoli Peninsula in Turkey. Even if you don't spend the night here, I highly recommend visiting; be sure to take the trail up to the clifftop.
We anchored in 2.5 m depth over sand. During the night a front passed by and the wind shifted multiple times, including briefly from the SW, but the holding was very good.

The next day we got going at 08:00 as the predicted low tide at the Coffin Bay entrance was 08:44. When we passed the first channel marker a few minutes before (predicted) low tide it was still ebbing strongly. That turned out to be just as well, because as we neared the 2nd marker the depth dropped to a mere 1.3 m. Fortunately Arriba only draws 1.1 m so we crept through with 20 cm (8") to spare. A keel boat would need to wait for a higher tide. Fortunately the channel deepens once past the second channel marker. As we followed the official channel we noticed a number of large fishing vessels taking a different route to the west, hugging close to Point Longnose. This is marked "Pt Longnose shortcut" on the map above, and is the route we subsequently took and recommend.

I'd heard great things about a cove called Black Springs (34°34.2'S 135°19.7'E), so we stopped there to stretch our legs. It's a picturesque cove that offers protection from SE thru NW winds.

From the cove we walked along a scenic coastal trail 2 km to a nearby campground. On the way back we encountered this large Lace Monitor. She exhibited absolutely no fear of us humans, and sauntered off into the bush at a leisurely pace. 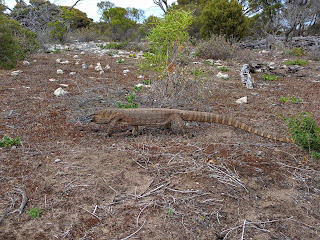 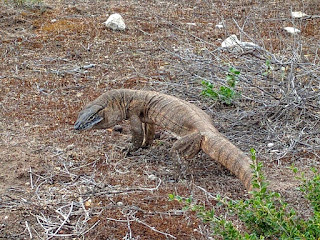 Shortly before noon we set sail for the town of Coffin Bay, 9 nautical miles away. There we dropped anchor among the moorings just west of the wharf. The town is a popular summer getaway, with the population swelling from ~600 to over 2,000. We were in need of some victuals, notably beer, wine and ice, so Andrew and I went ashore to resupply. 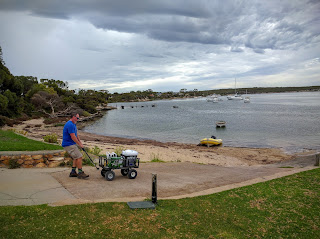 While we were ashore, Liam and Byron "repaired" Arriba's spinnaker with duct tape, as something sharp on the mast had sliced it in several places when we'd raised it yesterday. From then on we were very diligent about pulling the sail away from the mast. In the meantime, the duct tape repair held up very well. 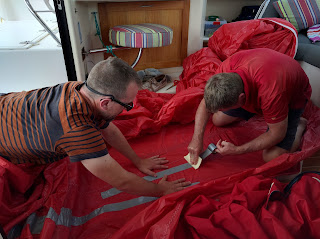 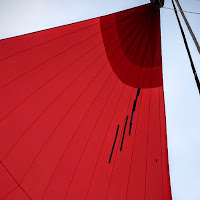 That night we had our first meal ashore, dining at the Coffin Bay Hotel. No visit to Coffin Bay would be complete without tasting Coffin Bay oysters. Later the pub kindly gave us a ride back to the yacht club where we'd left our dinghy. 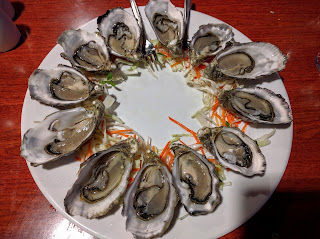 We awoke the next morning to dreary, rainy weather. Alas, it was day 4 of our trip, so it was time to to start the return voyage. Next stop, Williams Island.