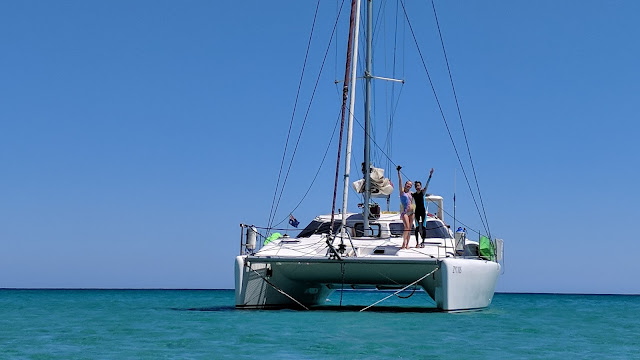 Preface: Life has been a blur the past few months and my blogging has suffered. So I’ve saved up for a good one.

For my sixth and final year I’ve auctioned off a sailing trip on Arriba with all of the proceeds going to charity. This year's cause was the Black Dog Institute. It’s my final one because I recently decided to leave Google to focus on AusOcean, which you can read about here. The bidders were particularly generous this time, so in return for their largesse I extended the sailing trip from 4 days to 5 days. Four of my crew, Sergei, Yuliya, Anatoli and Artem, were repeats from last year (gluttons for punishment I say), joined by Arriban first-timer Ying Ying.

As in previous years, we departed from Wirrina Cove (at 11:24 on 31st January). Conditions were perfect, with a 15- to 20-knot SE on our beam, picking up to 22 knots once we passed Rapid Head. Our speed was a comfortable 7.5 knots under single-reefed main and jib. However by the time we were mid-passage, i.e., about 2 hours into the trip, the seas had built up to 2m. The seas were relatively kind in that they were abaft of our port beam, rather than directly abeam, yet it still proved a little too much for some crew members. Cats exhibit a corkscrew motion in such conditions, which can be unsettling if you’re unaccustomed to it. Fortunately, it was a speedy run and by 16:10 we were safely anchored in the flat waters of Boxing Bay (albeit still quite gusty).

By now everyone was well and truly ready for terra firma, so we took the dinghy ashore. The dinghy's fuel must have lost a lot of its octane though, as it took us 10 minutes to get the outboard running well. During that time two of my dinghy crew were frantically paddling to prevent us from getting blown out to sea. Mixing in some newer fuel eventually did the trick.

Once ashore we gathered wood and built a fire, and later cooked beef burgers over the fire. We lingered ashore until after midnight and were treated to total lunar eclipse at 23:59. The last time Australia saw a full moon feature in a total lunar eclipse was in 1982. As a bonus, it was also a “blue moon”, namely the second full moon in the month. Alas, our viewing was marred by the pesky clouds.

We weighed anchor at 08:24 the next morning and set sail for Western River, 32 miles to the west. With a 20 knot wind from the SW assisted by seas from astern, we averaged over 7 knots under reefed mainsail and jib. We reached Western River 4 ½ hours later, where we swam and lunched. Western River  Cove is a beautiful spot and protected from all but N and NE winds, but it can be bumpy whenever the swell wraps around from the east. We therefore decided to continue westward 90 minutes later.


About 5 miles west of Western River, there is a small peninsula called Seal Rock, which offers protection from offshore and sideshore winds. The eastern side, which has a small sandy beach, is suitable in S or W winds providing the swell is light. Curiously, we found the local winds to be SE even though the winds further offshore were SW, so we tried the western side instead. The swell was decidedly uncomfortable though, and it would not have taken much to swing onto the rocky shore, so we continued on our way.

By 15:42 we were anchored at the scenic and marina-calm Snug Cove, which we shared with just one other yacht, anchored in deeper water. That gave us plenty of time for swimming, snorkeling and kayaking, before dining on board (Mexican) while enjoying a spectacular sunset.

The next day, day 3 of 5, we had the choice of sailing further west or starting our eastward return voyage. I opted for the latter to allow us more time for stops. We weighed anchor at 08:02 and as soon as we left the cove we were hit with 28 to 34 knot gusts on the nose! One of our kayaks was not properly secured and was promptly blown overhead, necessitating a KOB (kayak over board) operation.

Alas, our intended easterly heading was directly upwind so we crawled along under (single) motor at 4.5 knots, hugging the shore and the flat water, rather than tacking out to sea which was awash with whitecaps. At 11:25 we stopped at King George Beach for some relief from the wind and had a grilled brunch.

Two hours later we continued on our way. Fortunately the wind had swung more to the SE, so it was now possible to motor sail at 6.5 knots. Till now we'd sailed almost entirely under autopilot but Sergei took the helm for 3 hours. By 17:40 we'd had enough of headwinds so we tucked into the eastern side of Boxing Bay, the side of the bay opposite to where we anchored our first night. This location at the base of North Cape offered maximum shelter from the still strong SE wind.

I dropped the crew ashore so they could collect wood and build a fire, and we later enjoyed barbecued drunken lamb for dinner, washed down with some splendid Tempranillo.

The next morning we departed at 08:25 and motored into headwinds (again!) across Western Cove. Our destination 13 miles away was Red Cliffs, which is perfectly sheltered from SE winds. This was followed by another late breakfast, swimming and beach walking.

At 13:12 we continued on our way for American River, arriving at 14:50. We tied up at the boat ramp dock and hit the Deck Cafe for our first espresso coffees and ice creams since setting out 3 days ago. An hour and half later we sailed across to the other side of Eastern Cove, arriving at American Beach at 17:20,  the last overnight anchorage of our trip. Yuliya and I went for a kayak while Anatoli swam and the others relaxed.

The next morning we awoke to almost calm conditions, our first day with little or no wind. We set out for the mainland under motor at 08:39, arriving at Second Valley 4 hours later. As it was a hot day ashore, the beach was very crowded. We were the only vessel though so we anchored smack dab in the the middle of the cove.
Two hours later we weighed anchor for the final short (1.5 mile) leg back to Wirrina, arriving at 15.04.