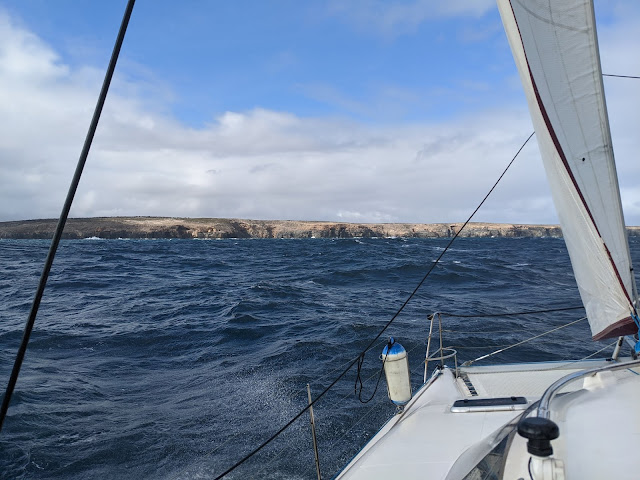 We were up by 7am and enjoyed a leisurely big breakfast. I was contemplating conditions out in the strait, considering just how soon we should depart. The forecast was for the cold front to move through and for conditions to start improving, but squalls were still lingering. It was yesterday’s squalls that produced the gale force winds, something I was keen to avoid.

At 08:05 I raised the mainsail with 2 reefs and unfurled the jib while still at anchor. Raising the sail at anchor is a neat trick, providing the wind direction allows you to sail for open water. Don’t try it in tight quarters though.

Conditions had indeed moderated, with seas in the 3m range and the wind a steady 25 knots. We had to work up wind in order to clear the western end of the island, tacking back and forth into Investigator Strait several times.

At 12:16 we completed our final tack of the day, calculated to just clear Vennachar Point - which we barely did. Cathie complained that I'd cut it too fine, and she was probably right! We were still sailing at 50° to the wind, but with the island now receding away to the SE we no longer had to head out to sea to maintain “sea room”.

As we approached Cape du Couedic, the island’s southwestern tip, in impeccably bad timing, the wind briefly dropped off to 10 knots. The light wind combined with the big seas on our nose absolutely killed our boat speed, which dropped to 3 knots at times. Fortunately in a catamaran any little gust is enough to propel the boat forward, and we held our course, threading the needle between the two islets lying offshore from the cape.


We finally rounded Cape du Couedic at 15:09 and were now sailing along the south coast. Conditions were simply superb. The wind was 18 knots from the SW and with 2 reefs still in the mainsail we were averaging a comfortable 6 knots. Convinced that the wind was not strengthening, I shook out the 2 reefs and our average speed increased to 7.5 knots. The ride to Cape Gantheume was sailing at its finest. The beautiful, rugged coastline visible on our port side slowly receded as we cut across Hansen Bay as the sun set and the light faded. There are not too many sailors who have ever enjoyed that stunning stretch of coastline. I would encourage more to do so.


We passed Cape Gantheume at 20:09 and adjusted our course 30° to the north for Cape Hart. The coastline was visible under moonlight for the next 20 nautical miles until Cape Linois, and thereafter the coastline receded to the north as we cut across D’estrees Bay. We were now sailing on too broad a reach for the jib to be effective, so I furled it, and we sailed under mainsail alone. In daytime I might have raised my spinnaker, but speed was less important than comfort and safety right now.

By 01:00 the wind speed disappointingly dropped to a measly 5 knots and our boat speed plummeted to 2 knots. Entering the capricious Backstair Passages without adequate sail power or engine power is unwise, so, reluctantly, I fired up the “iron sail” (a.k.a. the engine). A circumnavigation of KI under sail alone would have to await another (third) attempt.

Approaching Cape St Albans we suddenly found ourselves awash with whitewater, and I was very grateful to have steerage. There was so much white water that my depth sounder was misreporting a depth of 0.8m. For a moment I was worried that I had inadvertently deviated too far offshore and entered a patch of water known as The Scrapers, about 1 nautical mile offshore from the cape. That was not the case though. We were just experiencing one of Backstairs Passage’s little moods.


Once we rounded Cape St Albans we found ourselves in mill-pond calm waters. I anchored in 4.5m at 04:42 and promptly crashed.

Note: This is the 3rd leg of a Kangaroo Island circumnavigation. Next Antechamber Bay to Boxing Bay.