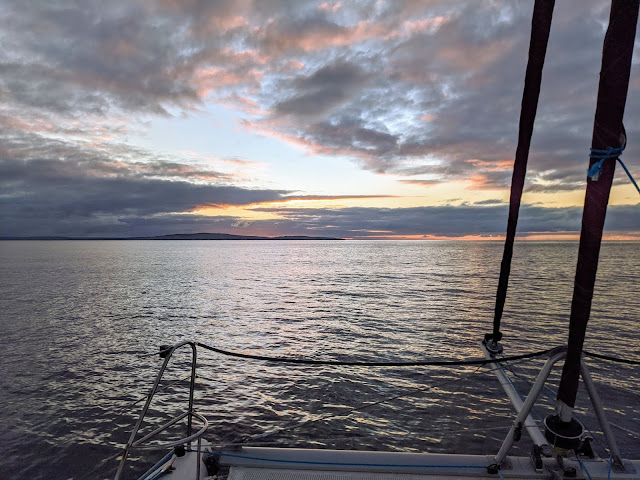 
I slept in until after 8am after enjoying 3 ½ hours of glorious sleep. The approaching high pressure system that had stolen our wind last night was now directly over us and had shut down the wind completely. Antechamber Bay was a mill pond. Sigh, the last leg of our circumnavigation would again require the “iron sail”.

We were in no rush to get going again however. We took advantage of the calm conditions to let Ferris have another swim off of the back of the boat. Several pods of dolphins swam by, but they appeared more interested in fishing than in us. Antechamber Bay is a great fishing spot for humans too, and there were a couple of fishing boats on the water, the first we had seen in days. In the past I’ve hooked a bucket of Tommy Ruff in less than 10 minutes. I threw the squid jig overboard but the squids weren’t biting, and I was feeling too lazy to fish with a rod.

We eventually got underway at 13:53, and motored at 6.2 knots in light to non-existent winds. Once we passed Point Morrison it was a straight shot across Nepean Bay all the way to North Cape. North Cape was on our beam just as the sun went down, and at 18.33 we were hooked onto our mooring at Boxing Bay. That concluded our circumnavigation of Kangaroo Island, my second, Cathie’s first. We felt like royalty to be treated to such spectacular scenery and such splendid sailing, with nary another vessel in sight most of the time. 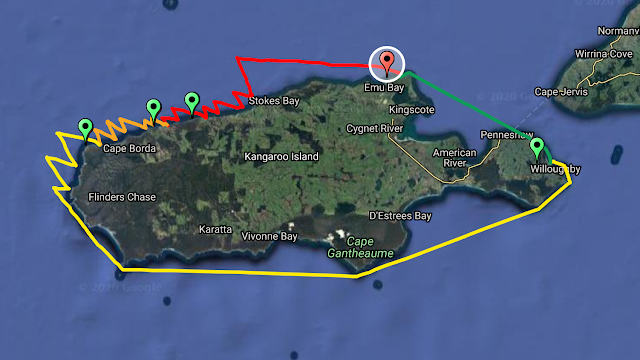