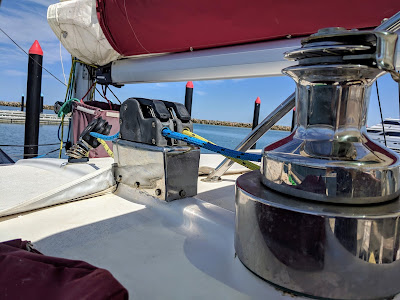 Six years ago I had an Andersen electric winch installed on Arriba (shown above). It makes light work of raising the main halyard and has been a godsend for single-handed and light-handed sailing. Because the winch is installed above deck, the rope clutches are mounted on top of a custom stainless steel box so the halyard (blue) and reefing line (yellow) are at the same height as the winch drum. After six years of hard use, the clutch box recently started to come loose from the deck. 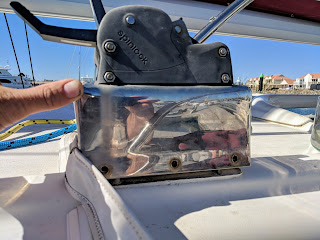 Clutch box detaching from the deck.

The original installation had just used screws to attach the bottom plate of the box, which was now in the process of pulling away from the deck. It was time to replace the screws with a through-deck bolts.

The first step was to remove the bottom plate and scrape away all of the old bedding compound. Then holes could be drilled through the deck and new bolts inserted from below. Next the surface was sanded, to remove the last of the old material and also to provide better grip. New bedding was then applied. I used Sikaflex 291 marine adhesive sealant. 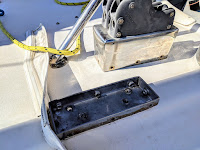 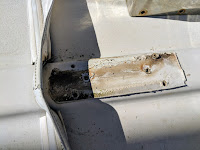 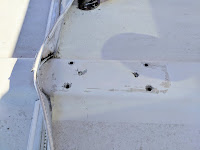 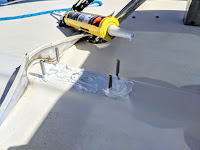 The new bolts could now be secured with lock nuts. Note that the plate originally had six M5 screws, but I used four ¼" bolts, considering they were now going all the way through the deck. Finally, the box could then be re-attached.

Tip: Applying some grease on bolts makes it much easier to screw on nuts and also provides some corrosion protection. 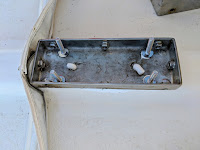 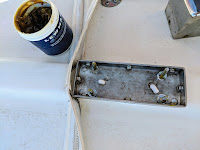 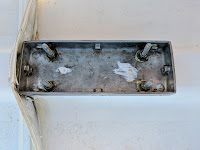 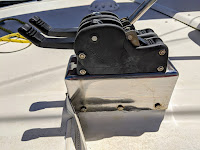 Below is an interior view of finished installation. I used large washers to spread the load from the bolts. A metal plate would be another option. The winch's inspection hatch is the circular plate close to the window. 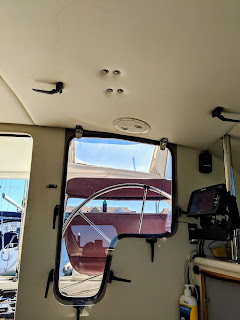 This was my first thru-deck repair and I'm pretty happy with the result. I think the main thing is to take your time, measure everything twice before drilling or cutting, and be generous with the Sikaflex!