Another stich in time 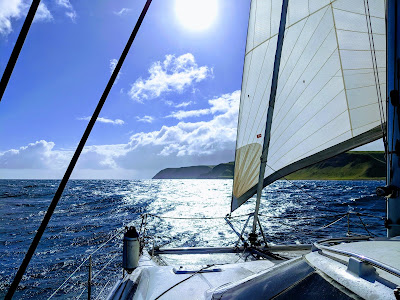 This time last year I hauled Arriba out for an unscheduled engine service when I noticed my sail drive gear box had water in it. I don't particularly enjoy the hauling-out process. A yacht swinging from a crane, or sitting on hardstands just makes me nervous. I was really hoping I could stretch it out for 2 years, however circumstances necessitated otherwise.

Last  month I was sailing back to Wirrina Cove from Kangaroo Island single handed as I've done dozens of times. It was a strong wind, about 25 knots, not that unusual for Backstairs Passage. As I approached the marina the wind started to get a bit gusty. Bloody gully winds! Nevertheless I decided it would be nice to have a full fuel tank ready for my next trip, in case I wanted to leave early before the marina shop opened. So I headed straight to fuel dock rather than berthing.

As I gingerly approached the fuel dock on the downwind side, I was suddenly hit by an almighty gust that threatened to swing us dangerously close to rocks on our downwind, starboard side. I instinctively spun the boat around the other way by powering full throttle forward on starboard and full throttle reverse on port. Arriba responded quickly. A little too quickly, as it turns out. Her port bow crashed into the fuel dock, accompanied by a deafening WHACK!


It did not sound good at all, and sure enough I had smashed the gel coat to smithereens at the point of impact. What was not clear was how extensive the underyling damage was. It could range from superficial, i.e., mostly gel coat damage, to extensive, i.e., shattered fiberglass, or even structural damage.

Well, I wasn't going to take a chance. My friend Nick and I sailed Arriba up to Adelaide a week or so later, and shortly afterwards Arriba was hauled out.

It turns out that a large area of fiberglass had been cracked and needed re-glassing, so I had made the right call. Arriba's hulls were starting to foul quite a bit too, so I took advantage of the haul-out to appply a fresh coat of anti-foul.

What did I learn?

First, I should have been content to with simply berth Arriba and call it a day. Conditions weren't good for maneuvering in tight quarters, but my impatience got the better of me.

Second, I should have approached from the upwind side of the fuel dock. That would have required reversing in, which in years of refuelling at that dock I have never, ever done. That is not an excuse though. If I'd been upwind of the dock and hit by a gust I would have been simply pushed, broadside against the dock, cushioned by fenders.

On a positive note, by taking care of the hull damage quickly I avoided additional waterlogging and a more extensive repair bill.

PS AusOcean has been keeping me very busy, but summer is just around the corner Down Under so I hope to up both my sailing and sail blogging over the coming months.
Backstairs Passage haul out Kangaroo Island maintenance Wirrina Cove