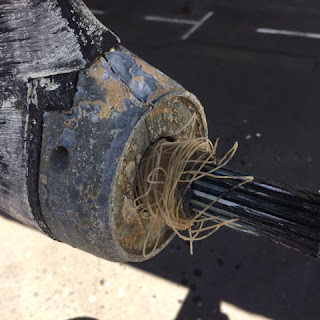 George Santayana, the Spanish-American philosopher and essayist wrote "Those who cannot remember the past are condemned to repeat it."

You may recall that back in January 2015, I fouled one of my props when reversing over some heavy duty fishing line. At the time I made the rather expensive mistake of keeping Arriba in the water for another six months. By the time Arriba was hauled out, the gearbox and prop shaft had badly corroded due to the ingress of seawater mixing with the gearbox oil.


So a couple of weeks ago when I noticed my port s-drive gearbox oil had turned milky in color, I was quick smart about hauling Arriba out of the water. It's almost summer down under and the boat yards are busy, but I was fortunate in having to wait only two weeks - during which time I refrained from using the port engine.

Sure enough, the port prop was snared in fishing line (top photo), none of which was externally visible. The line had had worked its way in tightly around the prop and shredded the oil seals, enabling oil to egress and seawater to ingress. The good news is, unlike last time, there was no damage to the bottom gearbox or shaft.

Usually when I haul Arriba out I also get her bottoms antifouled but it was not necessary. Although it has been 15 months since the last time, the Micron 66 antifoul has held up incredibly well. Only the rudders and sail drive legs had any appreciable wear so I just had those areas touched up. The above photo shows the leg after the antifoul was blasted off with a high pressure wash. For the rest of the hull only a low-pressure wash was applied.

OVER.
haul out maintenance propeller tips