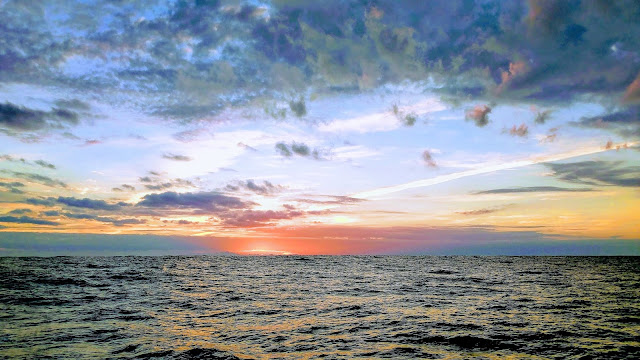 Once clear of the Anchorage Cove we had 16 knots of wind from the ESE, and were sailing at 7.5 knots towards Elliston on the mainland. Only 36 miles from Pearson Island, Elliston is the nearest town and all-weather anchorage. It would make a good base from which to explore all of the Investigator Group of Islands, including Flinders Island. Another time!

At 13:12, with the wind now from the east, we tacked onto a course towards Seasick Bay on the Coffin Bay Peninsula. A couple of hours later we replaced the jib with the gennaker, and our speed jumped from 5 knots to 7.5 knots, albeit requiring us to bear away. At 18:25, with the wind now 20 knots from the SE we tacked almost due south (185°). Over the next few hours the wind swung to the south pushing us further west, before eventually swinging back to the ESE. It was if some unseen force field was pushing us away from the hammer-shaped Coffin Bay Peninsula.

I briefy contemplated heading for a southern Yorke Peninsula anchorage, but with a strong southerly change forecast, I decided to instead head for the North Coast of Kangaroo Island. It was a long, bumpy day and night of sailing, but we averaged 7 knots under main and gennaker. At daybreak, with the wind from the ESE, in the interests of time, we fired up the iron sail. Our destination was Western River Cove 86 nautical miles away. Until now we'd hardly motored at all, but today we would burn through about 80 litres (~21 gallons) of diesel while punching into the headwinds and seas. To put that in context, Arriba only carries 250 litres (66 gallons) of fuel, so that was a big dent in our fuel budget.

Cape Borda was named by Capt Nicolas Baudin in honor of Jean-Charles de Borda, a French mathematician and nautical astronomer. Borda also invented a single-winner election voting method known as the "Borda Count", which is similar to the single transferable vote method used in Australian elections.

We then set course for Cape Forbin, hugging the coast in darkness, before turning for Western River Cove which we reached at 20:17 (April 23rd). I consider this to be one of the safer entrances at night on the NW coast of Kangaroo Island. The trick is to approach from exactly due north and aim for mid-cove. As a bonus, some campers had considerately lit a bonfire on the beach which lined up perfectly with my waypoint. We had traveled 222.8 nautical miles since leaving Pearson Island.

The long stretches were now behind us and we had a two days to cover the last 64 miles. The next morning we went ashore to stretch our legs and to hike up to the western headland. It rained for the first time since the start of our trip over one week earlier. Cathie and I were aboard Arriba at the time, but Helena and Diego had chosen to stay ashore just long enough to get saturated.
The forecast southerly change was nowhere in sight though. Instead, we were experiencing a light northerly, so I called VMR American River (VHF 21) and received a weather update from Carol. The forecast had been radically revised and we could now expect a westerly, strengthening to a near gale the day after tomorrow. We would aim to be back at port before the worst of it.

We weighed anchor at 13:36. Our next destination would be Boxing Bay, located half way between Western River and Wirrina. We arrived just over 5 hours later and had company in the form of another cat, "Alcatraz."

The next morning we awoke to beautiful weather - again! Diego and I went snorkeling while Helena and Cathie kayaked to shore and went for a walk. We got underway shortly after 10:00 enjoying light winds from the west. Along the way we were once again treated to a fantastic display of bowriding dolphins.
By noon the wind had picked up to 20 knots, and we could see ominous rain clouds in the distance bearing down on us from behind. Fortunately, we were safely back at Wirrina and packed up before the storm hit.

We had traveled 556 nautical miles (1030) km since leaving 10 days ago, and had been blessed with great weather and great sailing. Mother Nature had not disappointed either. From great white sharks, to sea lions to snook, the ocean had truly shared its bounty - at both ends of the food chain.