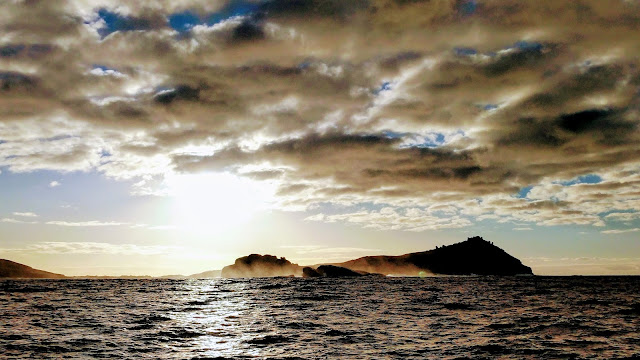 Approaching the Pearson Isles at sunrise was magical. One could imagine how Capt. Matthew Flinders might have felt when he stumbled across these remote islands in 1802. The main (north) island rises spectacularly to a height of 238 m and is visible 20 nautical miles away. The isles are also among SA's most ecologically important islands, having been isolated from the mainland for over 10,000 years and remaining free from any introduced pests.


Our journey started 26 hours earlier at 05:12 on Thursday 20th April when we departed from Port Lincoln with 4 persons on board (Helena, Cathie, Diego & myself). The early start was for 2 reasons: firstly to get through the notorious Thorny Passage at slackwater and secondly to allow plenty of time for detours and the vagaries of weather. Our plan was to sail through the night and arrive around sunrise, taking advantage of the forecast SW winds. We motored through Boston Bay in darkness. At that hour there were very few commercial vessels out and about. We had all the hungry fish to ourselves too! Between Cape Donnington and Taylor Island we caught four large snook, three within ten minutes of each other. 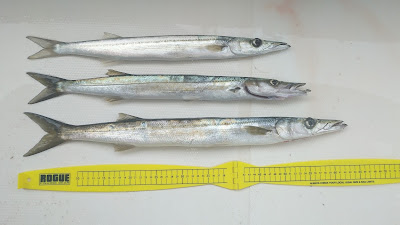 At 09:55 with the wind from the NW we started sailing with main and jib, but 25 minutes later the wind shifted to the WSW and we raised our gennaker instead. We were now sailing at 6 knots (SoG) in 12 knots of wind at 60° to the wind.

At 10:55 we tacked NW towards Fishery Bay and at 13:30 we anchored there for a lunch stop.
The bay offers a pretty sandy beach flanked by cliffs and is popular with surfers. The SW side of the bay is the best spot to shelter from W/SW winds. Swells wrap around Cape Wiles (34°56.74'S 135°41.06'E) so it's important to anchor well offshore to stay out of the surf. We anchored in 4.2m of water and promptly fired up the barbie. Half an hour later we weighed anchor and shortly after spotted our first dolphins of the day as we approached Cape Wiles. At 15:50 we set our course for Point Whidbey (34°35.29'S 135°6.56'E), the SW extremity of the Coffin Bay Peninsula.


Now would be a good time to mention that I had signed up for the Adventure Science Global Microplastics Initiative and offered to collect water samples during our trip into the Great Australian Bight. I had taken my first water sample shortly after passing Cape Donington, and I took my second sample at 16:06, five miles WNW of Cape Carnot (34°56.78'S 135°37.54'E). The water samples will be sent to a lab in the US for analysis.

Disappointingly, 2 of my 6 samples contained microplastics. You can read about the results here. 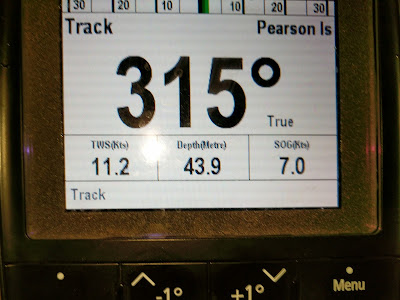 Two of our morning catch of snook went into a tasty seafood curry for dinner. A curry surely has to be one of the easiest dishes to to prepare at sea and leftovers taste even better the following day for lunch. BTW, the trick to enjoying snook is to gut and clean it as soon as possible after catching it.

Helena and Diego took the graveyard watch from midnight to 04:00, after which Cathie and I relieved them. The wind and seas were following us making for a dream run. Although the wind speed fluctuated between 5 and 12 knots, we were able to maintain the same course through the night. By 07:00 were were immediately off the north coast of Pearson Island, having sailed 105.3 nautical miles from Port Lincoln. I decided to circumnavigate the islands to take a look at the rugged windward side. The islands comprise three groups: the Pearson Isles in the north, the Veteran Isles in the middle, and lonely Dorothee Island in the south. They are part of the Investigator Group of Islands, covering ~280 Ha (~700 acres) in area. The islands and surrounding seas are also part of the Investigator Marine Park.

We furled our headsail and motored, passing north of Dorothee Island, before stopping at Anchorage Cove. This east-facing cove between the main (north) island and the lighthouse island is the preferred anchorage. There is a small beach and it is possible to anchor in 5m over sand with good holding. We anchored briefly, however I was keen to explore the anchorage on the NE coast that we had passed earlier, known as Eastern Cove (33°56.4'S 134°16.1'E), so we continued around.

We anchored in the SW corner of Eastern Cove in 9m of water. Although the holding seemed secure, I think it would be an uneasy overnight anchorage. In particular, any easterly wind shift would swing one very close to the rocky shore. We took it in turns kayaking (Arriba carries two), which the sea lions found very amusing. They jumped from the rocks into the water whenever we approached and followed us for some distance.
We could find no easy way to access the land from Eastern Cove, so after exploring for two hours we returned to Anchorage Cove, and anchored in 5.5m over sand. Going ashore we were greeted by dozens of sea lions, who were incredibly curious. 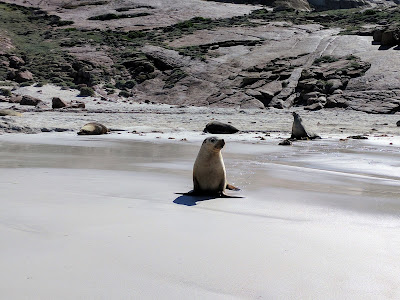 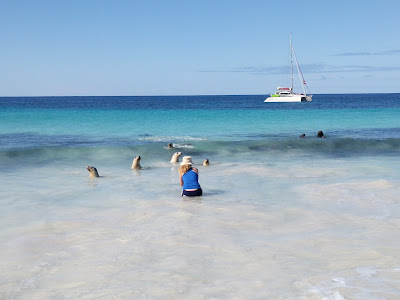 The pups were irresistible. In the water it was possible to get up very close to them providing one kept low and did not intimidate them. We then hiked up to the lighthouse which afforded us spectacular views.
Near the lighthouse we spotted several Pearson Island Rock Wallabies, which are a subspecies of the Black-footed Rock Wallaby and unique to the Isles.
Back at the cove there was more kayaking, swimming and exploring. Dinner that night was barbecued whole snook with baked yams. Note that fishing is not permited around Pearson Island so it is BYO fish. 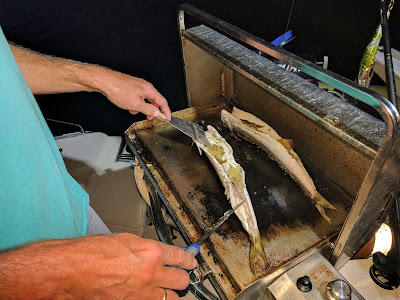 At 03:55 I awoke to the anchor drift alarm. Phew! Arriba had not drifted but the wind had swung to the ESE and we had swung at anchor. We were holding fine though and, as it was only blowing 7 knots, I reset the alarm and went back to sleep. By sunrise the wind had picked up, and our previously idyllic cove was starting to get a bit bumpy. I did not wish to tempt fate by going ashore and leaving Arriba untended, so instead we decided to feed the fish from our stern. We had fun peering underwater with our masks and snorkels and marveling at the great assortment of fishes that congregated. The star of the occasion was a large smooth stingray.

We would have loved to have enjoyed Pearson Island longer, especially to explore the main island, but unfortunately the easterly wind shift had ruled out that option. So with some sadness we weighed anchor at 09:55, Saturday 22nd April.

PS A neat video made by Helena.