Commands are entered via the Arduino device's serial port. In the above example, the add commands define a waypoint for each vertex of the triangle, the set commands specify the vessel position, speed and pilot mode respectively, and the goto specifies the first destination. The simulation is started and stopped with sim on/off respectively. You can find this and other sample simulations in the sims directory.


Simpilot currently implements the following pilot modes:
There is also a Standby (S) mode, but since there is no one to take the helm, it functions similarly to Heading (H) mode, albeit without any pilot messages.

Simpilot produces either NMEA 0183 or Seatalk messages depending on how it is compiled (look in port.h). The following messages are currently supported.
With the exception of DBT and AWS, these are common messages generated by an autopilot. DBT (Depth Below Transducer) and AWS (Apparent Wind Speed) would normally be produced by a depth sounder and anemometer respectively. Note that Simpilot does not currently accept any messages that would normally sent to an autopilot.

For testing purposes, Simpilot can also be compiled and run as a standalone (non-Arduino) command-line program using the supplied makefile.

Here's another simulation, along the north coast of Kangaroo Island, which can be found in KI_wineries.txt. 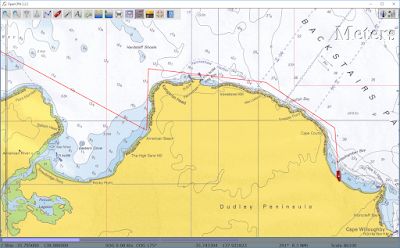 The following screenshot of the Arduino IDE serial monitor shows the start of the simulation, with the simulation commands being entered followed by NMEA 0183 messages being generated. 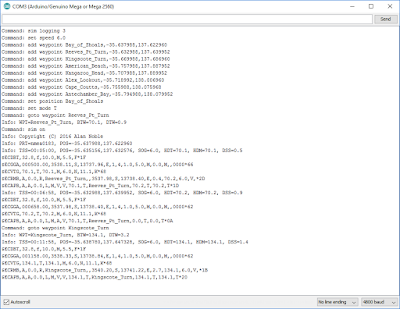 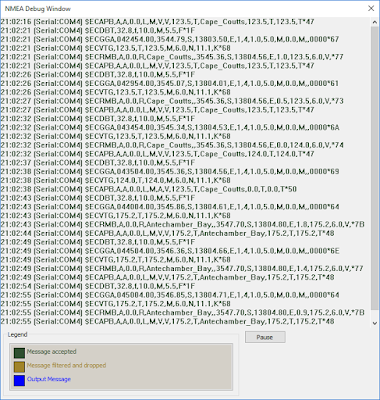 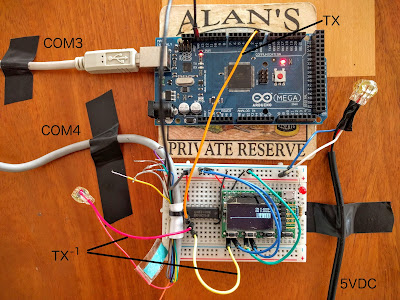 Note that since NMEA0183 signals are inverted, they need to be inverted for devices such as PCs that expect TTL logic. In my setup, COM3 is the Arduino serial port and COM4 is the inverted serial output that OpenCPN listens on.

Simpilot is free software: you can redistribute it and/or modify it under the terms of the GNU General Public License as published by the Free Software Foundation, either version 3 of the License, or any later version. The full source code can be found here.

NB: Simpilot is a simulator, it is is not intended to be used an actual autopilot.