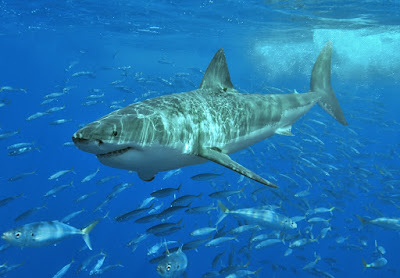 How many times have you read about a shipwreck, only to read about a shark attack in the next sentence? As if the prospect of death by drowning is not bad enough, our minds rush to contemplate more gruesome endings. We humans are a fearful bunch and, in particular, we seem to possess some primordial fear of big beasts, especially those with sharp teeth.

Perhaps that is why on every continent where megafauna did not co-evolve with homosapiens, our ancestors eliminated them shortly after encountering them. For some somber reading, read The Sixth Extinction: An Unnatural History.

In the 1800’s we turned our attention to the seas and did our best to wipe out the ocean’s megafauna, starting with whales. The whales are (mostly) safe from human slaughter these days, but many large ocean species lack such protection.

Which brings me back to sharks. According to the journal Marine Policy we kill about 100 million sharks per year. That could well be conservative though with the upper range north of 270 million!

We may well be afraid sharks, and we certainly don't relish the thought of being attacked by one. However of the more than 300 species of sharks, only about a dozen have been involved in attacks on humans. Further, it is believed that many attacks on humans are cases of mistaken identity. Look at the way most people splash around erratically in the water, and it is no surprise that sharks mistake us for dying seals.

The world needs sharks though. As the top predator in most marine ecosystems (trumped only by Orcas), they play a crucial role in keeping marine populations in check. They are efficient predators that mostly weed out the sick and the old. They belong in our oceans, not in our soup.

We still know surprisingly little about these magnificent creatures. We know that Great Whites, the species made infamous by the movie "Jaws", are fond of the Neptune Islands in South Australia, but we don't know how they spend most of their time. Studying sharks at the Neptunes is particularly important as these islands have become a popular shark-cage diving destination, and we don't know what impact such tourism is having on shark behavior.

This is why I'm supporting this shark research project lead by Dr Charlie Huveneer from the Southern Shark Ecology Group at Flinders University. In his words:


"The funds raised through the campaign are critical to support research which will ensure a sustainable cage-diving industry and reduce potentially detrimental effects on white sharks."

Please take a look at the Pozible campaign and lend your support. Thanks!