February 24th, our departure day from Coffin Bay, was going to be a long day of sailing. Once the front that was bringing rain passed, the wind was forecast to swing to the SW, the perfect direction for heading east. However once past Avoid Bay there would be no safe anchorages until east of Cape Carnot. We departed in rain and darkness at 06:15 and resolved to sail east as far as possible.

We raised the spinnaker at 11:25 and 2 hours later we finally rounded Point Whidbey and headed east. Unusually for South Australian waters, the sea fog persisted well into the afternoon.
By 17:00 we were south of Price Island, and shortly afterwards we crossed our outbound track, thereby circumnavigating the Island. About this time a curious seal chased us for about 5 minutes, likely attracted by the lures we were trolling behind us. An hour later the wind finally shifted to the SW and we unfurled the gennaker. We were making a respectable 5.8 knots from the 10 knot breeze.

Williams Island lies 3 miles SW of Cape Catastrophe (34°59.2'S 136°0.3'E). The Island's north coast has a beautiful little cove (35°1.5'S 135°58.4'E), with excellent holding over sand and sheltered from all directions except the northern quarter. The only small negative is that this anchorage is a tad bouncy during an ebb flow, but hardly enough to prevent four tired crew from sleeping soundly. By low tide the cove was perfectly calm.

Cruising note:
The waters around Cape Catastrophe can be challenging. The Cape is so named because Captain Matthew Flinders lost 8 of his crew when their long boat capsized nearby. Strong tidal currents flow through Thorny Passage, so the key thing is to avoid sailing in the Passage or around the Cape when an ebb flow opposes the swell and seas. Also, keep in mind that the nearest tidal station is Taylors Landing (34°51.30'S 135°57.62'E) which is 8 nautical miles north of the Cape, so the tide will still be ebbing at the Cape when it is low tide at Taylors.


The next morning, while my crew enjoyed a sleep-in, I kayaked ashore and climbed to the lighthouse, which offered some lovely views.
We set sail for Memory Cove at 09:10. With 12 knots of wind across our beam, the 6-mile trip took only an hour. Memory Cove is a gorgeous, tree-lined cove within a pristine Wilderness Protection Area. For the sailor it offers shelter from the SE thru S to NW and for the hiker it offers a number of scenic trails. We had the cove to ourselves - except for a few campers ashore and a kangaroo beachgoer.

Despite frenetic shouting from my crew, I'd managed to drop the anchor on the only patch of seagrass within 75 m of the beach! Sure enough, within minutes we were drifting backwards at a rate of knots. We re-anchored closer to shore, but I'd broken my own rule of never anchoring with the dinghy under tow and the dinghy painter was now fouled on Arriba's port rudder. Andrew volunteered to jump in and untangle the painter, which was straightforward. In the process, he discovered this massive bundle of nylon rope wrapped around the port prop, which needed to be cut off.
Yikes! We were very lucky that this had fouled the idle port prop, not our working starboard prop.
After brunch, confident that our anchor was now holding firm, we trundled off in the direction of West Point. The coastal views were quite spectacular.
It would have been awesome to spend the night at Memory Cove, but we needed to make tracks. At 15:45 we set sail for Wedge Island. Blessed with a 15 knot wind and boosted by a 1 m swell, both from the SW, we averaged 7 knots and covered the 28 miles in 4 hours.
The eastern side of Wedge Island provides excellent shelter from SW winds. We'd overnighted here exactly 2 years earlier, but this time we had the place all to ourselves. We'd had enough of tuna steaks and that night we dined on bbq'd drunken lamb, washed down with some fine wines.

The next morning we departed at 07:45. Rumor had it that there was a sea cave on the eastern side of the Island so large that an island resident once moored his yacht there. We spotted the opening to the cave as we passed by, sans yacht though.
Our destination today was Edithburgh, on the SE corner of Yorke Peninsula. We enjoyed beautiful sailing conditions with 10- to 15-knot winds and sunny skies. Granted more time, we might have stopped at West Cape for some swimming and fishing, but instead we pushed on. At 11:20 we passed Cape Spencer; we were now back in Investigator Strait.
At 18:45 we passed Troubridge Point, and turned north for our final leg through the Sultana Passage to Edithburgh. It turns out this was a mistake. The tide had started to ebb very strongly, and was flowing at 5+ knots against us. With only our starboard engine operating we barely averaged 1 knot against the tide, with our SoG dropping to a mere 0.5 knots at times. What should been 30 minutes, became over 2 hours and it was 21:30 before we were finally anchored at Edithburgh. We'd sailed 80 nautical miles from Wedge Island.

We briefly considered going ashore, but the discovery of a 2001 Penfold's St Henri on board sealed the deal and we decided to stay on board to enjoy wine and cheese.

The next morning, February 27th, we departed at 07:25. The forecast SE wind arrived too late in the day to help us much. I consider 5 knots to be the minimum speed when cruising so, for the first time since leaving a week earlier, we motor sailed most of the day to maintain our speed. At 15:43 we were back at North Haven, having traveled 506 nautical miles (937 km). We'd sailed from Adelaide to Coffin Bay and back in a week, enjoying great company, fabulous sailing conditions and some spectacular anchorages (our route). 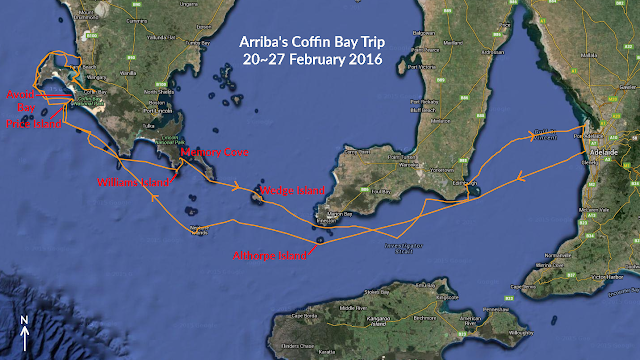 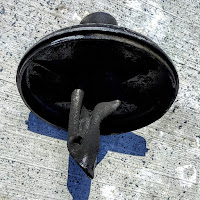 Returning from Pt Vincent to North Haven after the King of the Gulf Race one week earlier, Arriba's port engine conked out just as we approached the marina. This engine has a short fuel supply line and has stalled several times before, due to air getting sucked into the fuel system. It tends to happen in bumpy seas any time the fuel tank is less than half full. As we'd been motoring hard into a headwind for several hours, I naturally assumed this was the case again and told myself I could fix it once we were underway. The engine would start, run for a few seconds then stall, which strongly suggested a fuel problem. Boy, was I wrong! After bleeding the air several times, and replacing the vent screw, the vent screw washer, the fuel pre-filter and the fuel filter, I was no closer to having an operational port engine.

Back home my mechanic discovered that the water-lift muffler's internal intake pipe had melted, almost completely blocking the exhaust flow. This is an unusual failure mode. The operator's manual only mentions the following possible causes for an engine starting then stopping, which I had already ruled out myself:
The "smoking gun" was excessive carbon deposits accumulated in the exhaust hose between the engine and the muffler. Something was causing the exhaust to back up, and that something was the faulty muffler. As for the root cause, that muffler has undoubtedly been slowly failing since the port engine overheated in 2012, due to an earlier mistake by a (different) mechanic. Unfortunately, once the exhaust flow starts to constrict, the temperature in the muffler rises, resulting in further constriction, i.e., a vicious circle.