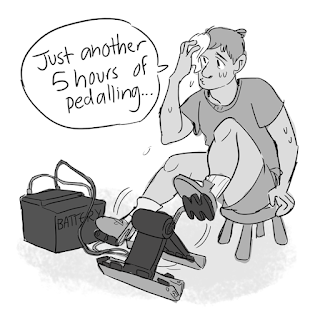 Earlier this week I was talking with a colleague about one of the yachts in Sydney to Hobart Yacht Race which lost power mid-race. Both house and starter batteries had drained due to a faulty electrical connection. Like many yachts, they had PV panels, but the weather was so foul that there was no prospect of solar charging. Their main VHF radio (powered by the house battery) was dead, but fortunately the crew had hand-held VHF radios and they were able to call for a tow at the end of the race.

It got both of us thinking about the various options for emergency power on board, and in particular the options for starting a diesel engine. Once an engine is running, the alternator can quickly generate all of the on-board power you need. Older diesel engines with a decompression lever could often be started by hand cranking, but this is typically not an option with newer engines which run at higher compression ratios and therefore depend on an electric starter motor.


Beyond renewable energy sources, such as wind and solar, what are your emergency power options? There are essentially two approaches, stored energy and generated energy.

I think the best option is to simply carry a spare battery that is always kept charged, and preferably a dual-purpose battery that can both deliver cranking amps for engine starting and tolerate deep discharge cycles. This is what I do on Arriba and it got me out of this pickle last year.

If your starter battery only needs a top-up of a couple of Ah, a cordless drill battery might suffice, and there are certainly many accounts of cars being started this way. I’m skeptical it would work for a diesel engine which requires much greater torque and typically needs to spin at least 2 times faster than a petrol/gasoline engine before starting.

Tip: Keep your spare battery in a high location, not down in the hull, so it stays dry even even if you take water on board.

Having a dedicated battery for your VHF radio is an excellent safety precaution, and in fact a prerequisite in many countries for vessels requiring a “survey” certificate. If you ever charter a boat, chances are that the VHF radio will have it’s own battery which is isolated from the house batteries. Consider upgrading your radio battery so that it can do double duty as a starter battery in an emergency.

Another option is to use a portable jump starter like this, i.e., a device routinely used by motorists to jump start vehicles. Jump starter batteries are packing more and more energy into less and less space and can start small diesel engines, such as Arriba’s 27 hp Volvo Penta engines which displace a tiny 1.13 liters.

If you’ve run out of stored energy, your only other option is to generate energy. The simplest option is to simply carry a small portable generator (genset), which you can start manually by recoil.

If you have an outboard motor, it’s possible to add an alternator, which is basically just a charging coil with a rectifier. Even a small 5 HP 2-stroke engine can produce a respectable 5A at 12V (60W) (source).

A more energetic way of generating power is by means of human power. For example, there are products like this that produce 20W at 12V from pedal power. That’s a modest 1.67 Ah for every hour of pedaling, or 6 hours to produce 10 Ah.

Having said all that, the best strategy is to avoid running out of power in the first place!