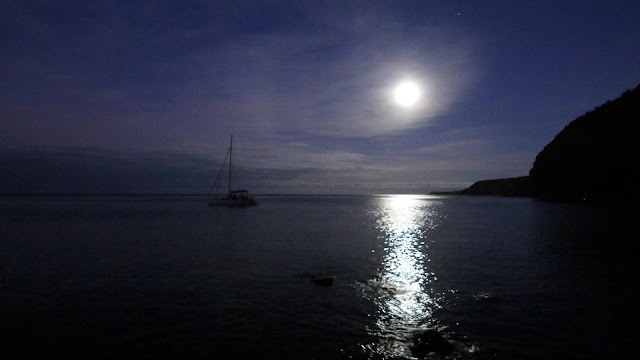 For the fourth year in a row I’ve auctioned off a 4-day cruise on Arriba with all of the proceeds going to charity, matched by my employer. My crew this year were Dana, Mitch, Vanessa, Carson, Chelsea and Max.
Our destination was Kangaroo Island (KI) - naturally! With everyone (except me) flying in from interstate, followed by the 90-minute drive down to Wirrina Cove, including a crucial last-minute stop for supplies, pies and coffees, we didn’t get underway until 11:45 (Saturday January 23rd). That’s later than ideal, but fortunately we were blessed with 15-knot winds from the SSE and averaged over 7 knots until abeam of North Cape. At 17:15 the wind dropped off and we motor sailed the rest of the way.

I've found that the trick to a short trip to KI is to start from Wirrina and sail as far west as possible on the first day, a plan which is well suited to southerly winds and long summer days. At 19:50, having sailed almost 52 nautical miles, but with still an hour of light remaining, we stopped for our first night at Mares Tail (35°36.1'S 137°16.1'E). This is a very pretty anchorage at the base of steep cliffs which provide shelter from East, South and West winds, and is a perfect spot to escape from the prevailing SW swell. The only thing it lacks is a sandy beach, however there’s a small pebbly beach. There is also a sea cave with stalactites and a small waterfall, which collects in small natural basins. Finally, high above on a cliff ledge there is a sea eagle nest.

We had Mexican food for dinner, accompanied by lots of South Australian wines, mostly from the Clare Valley and Mclaren Vale. Full disclosure: the wine flowed long before dinner with the Zonte's Footstep Prosecco a popular choice for happy hour. After dinner Carson paddled ashore in the kayak to take the stunning top photo. We also discovered that Mares Tail has the most amazing echo.

The next morning we continued westwards to beautiful Western River Cove 17 nautical miles away, arriving at 10:30. There was another yacht (monohull) at anchor in deeper water on the eastern side of the cove, so I took Arriba in close on the western side and anchored in 3 m (Arriba only draws 1.1 m). While the crew went ashore for a strenuous hike up to the top of the western headland, I swam and tidied the boat. What had started out as a cloudy morning turned into a lovely, sunny day. We spent the next 6 hours on the beach, in and out of the water, and in particular enjoying some excellent snorkeling.
It would have been very tempting to have stayed at Western River, but I wanted to ensure we were within a short sail of either Kingscote or American River tomorrow (for our third and final night). So at 16:20 we weighed anchor, turned around and headed eastwards for Emu Bay.
Continued here.