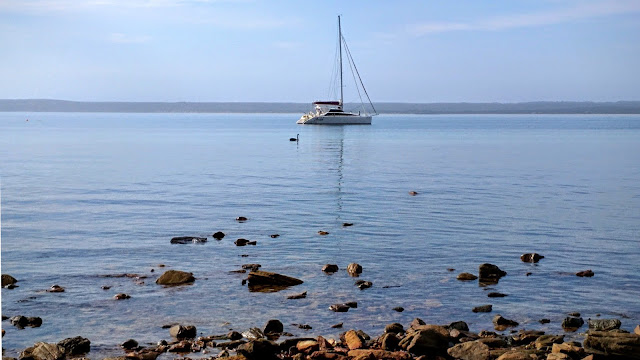 Over the October long weekend we sailed across to Kangaroo Island for the grand opening of the Independence Boathouse. Saturday morning chores kept me busy and we did not depart from Wirrina Cove until 2pm, considerably later than usual. Consequently we were not abeam of Ballast Head (35°45.46'S 137°48.19'E) until after sunset, and still had another 3 miles to go. Although I've sailed to American River dozens of times, I do not relish mooring there at night, especially with very little moonlight. As any visitor to the River knows, there are so many moorings helter-skelter in the channel, including half-submerged, barely visible ones, that motoring down the channel is like playing "dodgem cars" (a.k.a. "bumper cars"). I therefore decided to anchor outside, in the lee of Ballast Head. I'd seen other vessels anchor there and I've fished there during the day, but I'd never overnighted there till now. I'm glad I did, as it is a delightful spot.


Historical note:
Nicolas Baudin named the the headland "Cap des Kanguroos", and there is even a third name recorded, "Whalebone Head". Ballast Head stuck as it was one of the places on Kangaroo Island where ballast was loaded onto sailing ships returning to Adelaide. Later, until 1986, it was used as a port for loading gypsum (photo). The former gypsum stockpiles are the white, scarred areas in the satellite image below, slowly being reclaimed by vegetation. The port was dismantled in 2010, yet barely 5 years later there is talk of rebuilding it.

The anchorage (35°45.81'S 137°47.84'E) is half of a nautical mile SW of Ballast Head, opposite a small gully. There is a mooring owned by the local farmer, Tim, which is reportedly in good condition. (You can just make out the mooring buoy to the far left of Arriba in the top photo.) Alternatively drop your pick in about 2.5 m of water, just south of the mooring, but keep north of the oyster beds. While the shoreline is rocky, the anchoring is over seagrass and sand. This location offers protection from the southwest, west, northwest and even northerlies if you tuck in close. Light southerlies are OK too since there is not much fetch from that direction, but if the wind blows strongly from that direction, move around to Newland Bay, north of Ballast Head. For easterlies, it's time to move into the River. In our case, with a northerly wind and swells from the west, we enjoyed marina-calm conditions and a lovely view of the lights of Island Beach across Eastern Cove. This is also a great fishing spot too, frequented by garfish and whiting.


NB: If approaching at night, keep 200m offshore to avoid inadvertently hitting the mooring, then approach from the south, as shown by my track below. 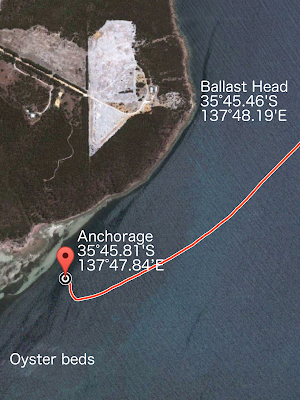 On Sunday we celebrated the grand opening of the Independence Boathouse at American River, purpose built to house the reconstruction of the Schooner Independence. The event was a great success with over 200 attendees and a good deal of fund raising. Long-time supporter of the project and former Kangaroo Island Mayor Jayne Bates officially opened the Boathouse.

The flags of the USA, UK and France represent the three nations involved in the early exploration of Kangaroo Island, and American River in particular.

The opening of the Boathouse successfully concludes Phase I of the Rebuild Independence project, and the project now enters Phase II, the boat-building phase. The following day, committee members met CYCSA President Andrew Saies, who offered some advice on future project directions.

It also also worth noting that while we have preliminary plans, we are still in need of the services of a marine architect, preferably someone willing to work pro bono. Give me a "hoy" if you know someone who'd like to lend a hand.

To learn more about the project visit our website, Facebook page or Google+ page. Or you can sign up for free to become a Friend of Schooner Independence here.