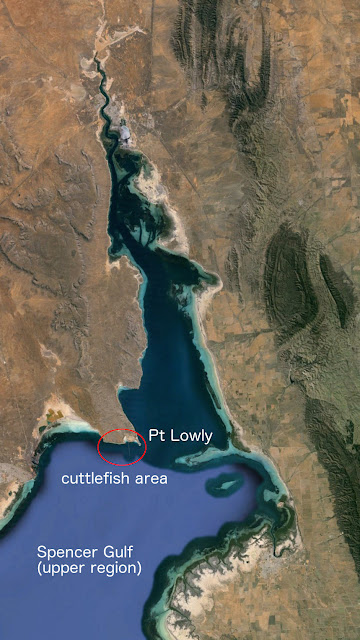 Last weekend I went diving with South Australia's giant cuttlefish for the first time. Sailing up Spencer Gulf to their breeding ground near Point Lowly (33°0.042'S 137°47.072'E) would make a wonderful weeklong sailing trip. The plan would be to wait for a good S or SE wind then depart from Wirrina Cove at sunrise. Sailing all day and night, averaging 6 knots we'd cover the 130 miles to the Sir Joseph Banks Group islands in about 22 hours. We'd then rest during the day before setting sail at sunset for Whyalla or Point Lowly, 120 miles to the north (being careful to keep to the starboard of Shoalwater Point Light (33°41.780'S 137°14.026'E).

That said, my first trip to visit the cuttlefish was over land, not sea. The 400 km road distance (slightly shorter than the 250 sea miles) took only 4 hours, not 2 or 3 days.

Most southern winters between May and August, giant cuttlefish congregate in their tens of thousands to breed near Point Lowly. The Australian giant cuttlefish (sepia apama), is the world's largest cuttlefish species, growing to 50 cm in mantle length and over 10 kg in weight. They are a semelparous species, meaning they die after breeding (by fasting to death). The cuttlefish need rocky shallow waters to lay their eggs, and a quick glance of the satellite map (right) shows why the cuttlefish like Point Lowly. Most of the Spencer Gulf coastline is sandy and devoid of suitable habitat. The cuttlefish found in upper Spencer Gulf are the only ones known to gather in large numbers, and it is theorized they are a distinct species from those found elsewhere in Australia.
We rented our dive gear from Whyalla Diving Services whose owner, Tony Bramley, has a wealth of knowledge about cuttlefish. For example, we learned that small males can impersonate females to get in closer to potential mates. The dive was shallow, only about 3 meters (10'), and the water was exceptionally clear with visibility in excess of 20 meters (65'). As for the cuttlefish, they are simply adorable. Swimming over them can make them skittish though, since predators tend to attack from above. They were extremely quick to find shelter under the rocks when a lone seal came sniffing around. Once one descends to their level though, they are happy to let you to get in close. This is a good reason to scuba dive, rather than just snorkel.

One day I'd love to return with Arriba and visit earlier in the season.