December 15, 2014
Kangaroo Island is my favorite sailing destination, so it doesn't take much to conjure up an excuse for me to sail there. Unsurprisingly, when my employer's charity auction rolls around every year, I auction off a 4-day cruise on Arriba skippered by yours truly. Believe it or not, people actually pay to have me as their skipper!

NB: For the record, they are not paying me, they are donating to a charity, which my employer Google then matches dollar for dollar, and I donate Arriba, expenses and my time.

This is the 3rd year Arriba has been auctioned off, and the second time we’ve sailed to Kangaroo Island (here is last year’s trip). My crew this year, Lu, Pete, Eddy, Jim, Marie & Rohan. Each couple had a cabin and I did the seamanly thing and slept in the saloon, close to the helm and the instruments.
Our original plan was to set sail from Wirrina Cove on Thursday afternoon and head for Emu Bay. However a gale was blowing in Backstairs Passage and just motoring over to the fuel dock and re-berthing was challenging enough with 29 knot gusts in the marina. So we did some sightseeing instead and visited nearby Yankalilla and Normanville.
The wind was still howling when we returned to the marina so I made the call to stay put that night. We enjoyed some fine South Australian wines and played some card games before settling in for the night. I'm normally an exceptionally sound sleeper but for some reason whenever I sleep on board the slightest irregular sound wakes me. I'm not referring to the usual boat sounds, like waves splashing or halyards clanging, but irregular sounds, such as an unexpected thud. Imagine my surprise when I awoke at 3:30 am to absolutely no sound and a calm marina. Knowing that attempting to go back to sleep would be futile, without wasting a moment I lashed down the kayak, rechecked the weather forecast one last time, released dock lines and set off at 04:00. Our first waypoint was Cape Cassini (35°34.5'S 137°19.2'E), which must be cleared (coming from Wirrina) before heading to points further west on the North Coast.


Once a little offshore, the SE breeze picked up to 10 knots so I raised the main and unfurled the gennaker. The wind picked up to a perfect 15 knots as the sun rose.
At the 30 (nautical) mile mark we were abeam of North Cape (35°33.68'S 137°37.31'E) and hugged the coast for the next 29 miles passing spectacular cliffs, and encountering only one other yacht.
7 ¾ hours and 59 miles later we anchored at King George Beach a.k.a. Hawk's Nest (35°39’S 137°7.1’E), having averaged 7 ½ knots. King George Beach is a pretty cove, although it has been marred somewhat by the beach houses. We ate, swam and explored the cove, but with the wind switching to the west it was time to move on. King George Beach only offers protection from NE through S winds, and is completely exposed to any westerly winds or swell.
Our destination was Western River Cove (35°40.45'S 136°58.25'E). Although only 7 miles to the west as the crow files, it took us 2 hours and 11 miles to tack up wind. I handed the helm to Jim and took the opportunity to have a much-needed siesta.

Of the half a dozen or so coves I've visited on the North Coast of Kangaroo Island, Western River Cove is still the one that stands out from the rest. This beautiful sandy cove sits between two imposing headlands about 200 m apart, and with space for only a few vessels at any given time and backing onto a conservation park it should stay pristine. There is a nearby campground with toilets but it is not visible from the beach. Western River offers protection from E through NW winds.
A fishing boat decided to park within spitting distance of Arriba, but they eventually moved on before returning a couple of hours later to a marginally better spot between us and the beach. More wine and games ensued that evening. We also hooked a large squid which I promptly dispatched and put on ice (which helps tenderize it).

During the night the fishing boat's anchor drifted and in the wee hours I awoke surprised to find Arriba's saloon illuminated by my neighbor's anchor light. They were now abeam of us and less than 10 m away. I felt like blasting them with my fog horn, but thought better of it as I'd annoy my crew as much as them. So I attached 3 fenders as a precaution, and attempted to get back to sleep.

By sun-up the fishing boat was fortunately no closer, but I noticed that a runabout that had deliberately beached itself the previous evening was partially awash, with flotsam now floating all over the cove. Setting out in my tender I retrieved 2 life jackets, a hand reel and a plastic container, which I piled it on the beach above the high-tide mark. I felt sorry for the owners as their boat's battery was now underwater and ruined, so I walked to the nearby campground but there was no sign of anyone and there was nothing more I could do.

None of my crew had emerged from their cabins when I decided to get underway at 7:30 am. Next stop, Knob Point (35°36.5'S 137°13.9'E). There is a cove just south of this point I'd read about that I wanted to explore first hand. The wind was fickle so we motored on just one engine at a leisurely 5 knots, covering the 13.7 miles in 2 ¾ hours. En route we caught this beautiful Australian Salmon on the paravane lure we were trolling with.

The cove south of Knob Point is tiny - only big enough for one vessel - but offers excellent protection from easterly winds from N through S. The fishing is reportedly very good here, but for me the main attraction is Lathami Conservation Park, which lies a short distance to the south and is famous for its endangered Glossy Black Cockatoos. Going ashore would have to wait for another visit though.

After breakfast burritos at anchor we set off again. Our plan was to overnight at American River, but my crew were keen to visit an island winery and the nearest one by boat, Sunset Winery, was over 38 miles away. Along the way we were again treated to a display of bow-riding dolphins. 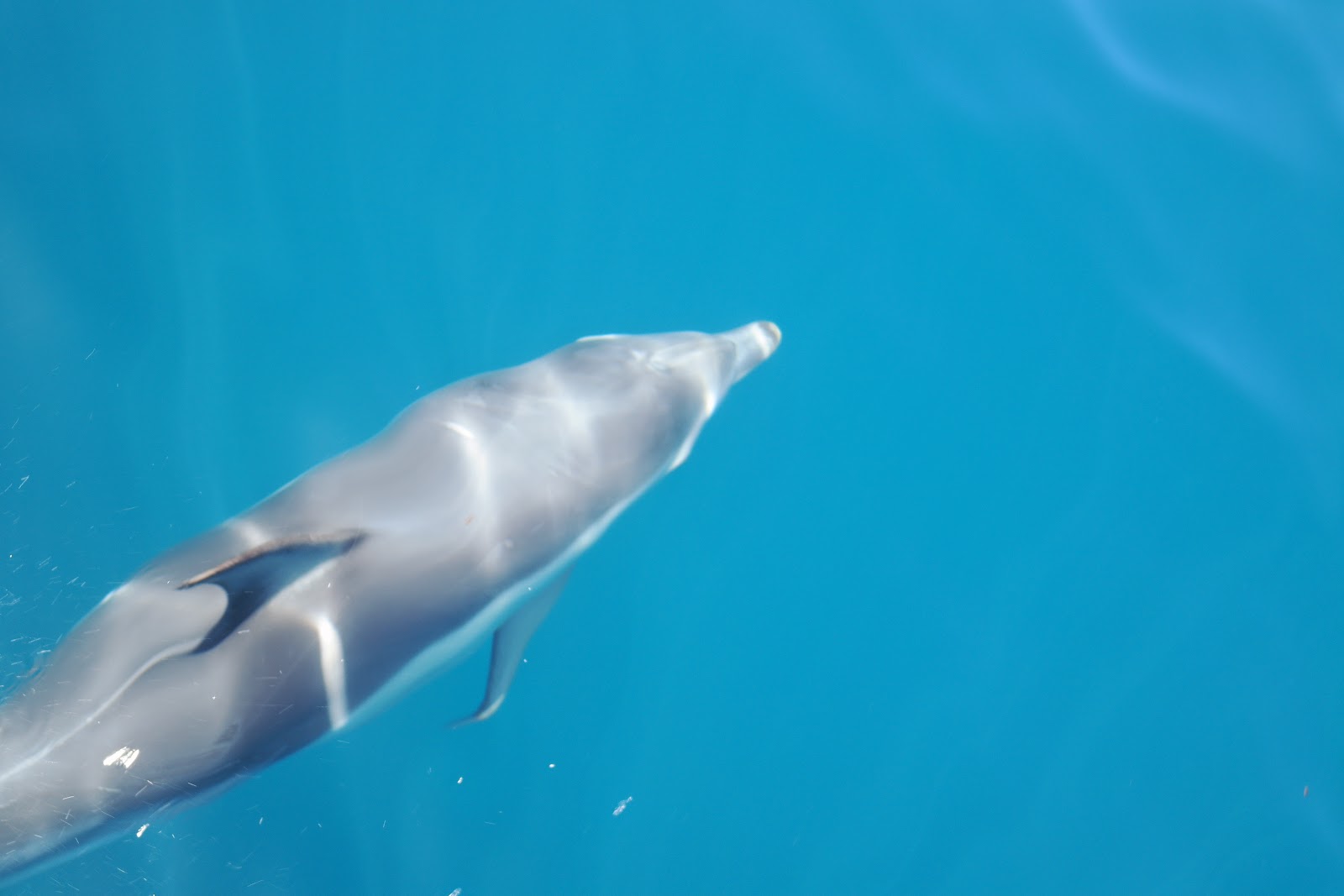 After we passed North Cape the wind finally picked up but it was right on the nose, so it was time to fire up the second engine to ensure we got to the winery before closing time at 5 pm. We dropped anchor at 4:35 pm at American Beach, scrambled into the dinghy, sped to the beach, scurried up a cliff, then hiked up the winery's steep driveway. It was worth the effort as the wines are all good, and view from the winery over Eastern Cove is lovely.
Later we set sail on a beam reach for American River accompanied to very loud, highly non-traditional nautical tunes, such as I'm on a boat and Sail. I think the Sunset Winery's Sparkling Shiraz that was flowing by then influenced the choice of music :-).
American River, or "The River", is undoubtedly the best all-weather anchorage on Kangaroo Island. We anchored at my favorite spot just north of Picnic Point (35°47.8'S 137°45.9'E), and enjoyed a sensational "surf and turf" of barbecued calamari and kangaroo.
More wine and games followed that night. Do you see a pattern yet?

The next morning we weighed anchor at 08:30 and once clear of the channel set sail in light winds. I declared our third and final day a "no autopilot" day and everyone took turns at the helm. We sailed into Wirrina Cove 5 ½ hours later in perfect conditions, the gale of 3 days earlier but a distant memory.