Before my first offshore race earlier this year I started researching the topic of emergency steering and found that most of the literature is aimed at monohulls. For example, standard monohull-ist advice is to carry an emergency tiller, but I’ve not found this to be common on catamarans. Arriba, my Lightwave 38, did not come with any provision for installing an emergency tiller, which I attribute to the design of the transom and rudder placement. Those low transom scoops, which make it so easy to board a cat, mean that the base of any emergency tiller would be awash under normal sailing conditions. Besides, an emergency tiller is completely useless if your rudder fails. Failures include the rudder breaking away or partially breaking away, and the shaft bending, breaking or jamming.

One thing I love about cats is that they have built-in redundancy by virtue of having two hulls, two engines and, most importantly from the standpoint of steering, two rudders. It's very unlikely that a cat would be so unlucky as to simultaneously lose both rudders completely, and even half a rudder provides some steerage. Arriba’s port rudder broke in half when I stupidly allowed her to run aground stern first onto a sandbar. (I was not onboard at the time, and the incident happened before my upgrade to a serious anchor). After re-floating I returned to port and didn't notice I was sailing with only 1 ½ rudders.

But suppose a modern-day Moby Dick simultaneously destroys both of your rudders? Even then you still have options:

The simplest option, if you have enough fuel, is to steer with your engines. Steering a cat by engine throttles alone is not difficult. In fact, many cat sailors, myself included, prefer to park this way, i.e., with the wheel locked in the center position. A variation on the engine theme is to use your dinghy’s outboard to tow your vessel, if for some reason both of your main engines are out of order. That said, although I’ve used my dinghy to tow another cat around a marina, this method would be completely impractical in rough seas.

A second option may be to steer by sails alone, perhaps using engines only to turn. Compared to many monohulls, catamarans have great directional stability, which is to say, they track straight. By analogy, think how much better a 4-wheeled vehicle tracks compared to a motorbike. It should therefore be possible to trim sails to achieve a good degree of steerage - assuming your damaged rudders are not jammed at some weird angle. Before I had an autopilot, I often used to lock the steering wheel in place and, with practice, was able to keep sailing Arriba in a straight line for a considerable distance. Every sailor should try this. In a real emergency if your wheel becomes disconnected from one or both rudders, say due to a steering cable breakage, you will need to lock the rudder(s) in place at the rudder post. Steering by the sails is easier upwind or on a beam reach than downwind. Unfortunately steering by sails alone is extremely difficult in bumpy seas, since the constant pounding keeps knocking the boat of course. This brings me to option #3.

Another option, and probably the only option in rough seas, is drogue steering. My primary drogue is a Seabrake GP30L made by Burke, which I purchased for use as a storm drogue, i.e., just to slow Arriba down. I think it is too big to use for steering in non-storm conditions so I recently purchased the smaller GP24L model too (which also serves as a backup to my main drogue). When using a drogue in a storm to slow down, setting it on a single line off your weather quarter (windward hull) is sufficient. However steering by drogue requires a bridle setup and the recommended configuration is to attach the tow line off the weather hull and attach a secondary control line at a fixed point along the tow line approximately 2/3 to 1 boat length astern of the boat to the opposite (leeward) hull. Attaching the latter to a winch makes it easier to make adjustments.

Here are some drogue usage tips:

Drogues have lots of other uses too as this card from Burke shows:

A light-wind alternative to drogue steering, is jury rigging a steering oar. The oft-quoted method is to lash a piece of wood, such as a floorboard, to a spinnaker pole. Again, this is somewhat monohull-ist advice since most cats are usually beamy enough to fly an asymmetrical spinnaker without the need for any such pole. It so happens that I keep a 2-piece windsurfing mast on board, but doubt it would be stiff enough to function as a rudder post. Most accounts suggest jury-rigged steering oars are impractical in big seas.

Finally, the auxiliary rudder of some windvane steering systems can be also used to steer, but few cats seem to have such systems installed. I’ve read they don’t work as well on multihulls due to lower apparent wind speeds, but this is probably only true of very fast cats. I suspect most cat owners simply don’t want to lose precious transom space to such an installation.

If it is just the steering wheel mechanism or chain which has failed, and the rest of steering system and a rudder is still functioning, then the autopilot can be used to steer. Therefore if your boat is not answering the helm, giving the autopilot a quick flick to ‘Auto’ is at least worth a try.

As with everything on a boat, the best defense against a problem is proactive maintenance. Every sailor should be familiar with their vessel’s steering system and know how to make basic repairs and also how to lock rudders in place. Arriba came with no documentation about the steering system, but replacing that damaged rudder and installing an autopilot gave me good insights. It’s better to figure it out in the calm of the marina rather than in the tempest of a storm.

Like many small vessels, Arriba has a mechanical steering system. The steering wheel is connected via a chain to a sprocket on an axle, which turns a rack-and-pinion linear actuator driving two steering cables which are in turn connected to the rudders. The autopilot’s rotary drive unit (below) is connected separately via a second chain to a second sprocket on the axle, providing a measure of redundancy as described above. 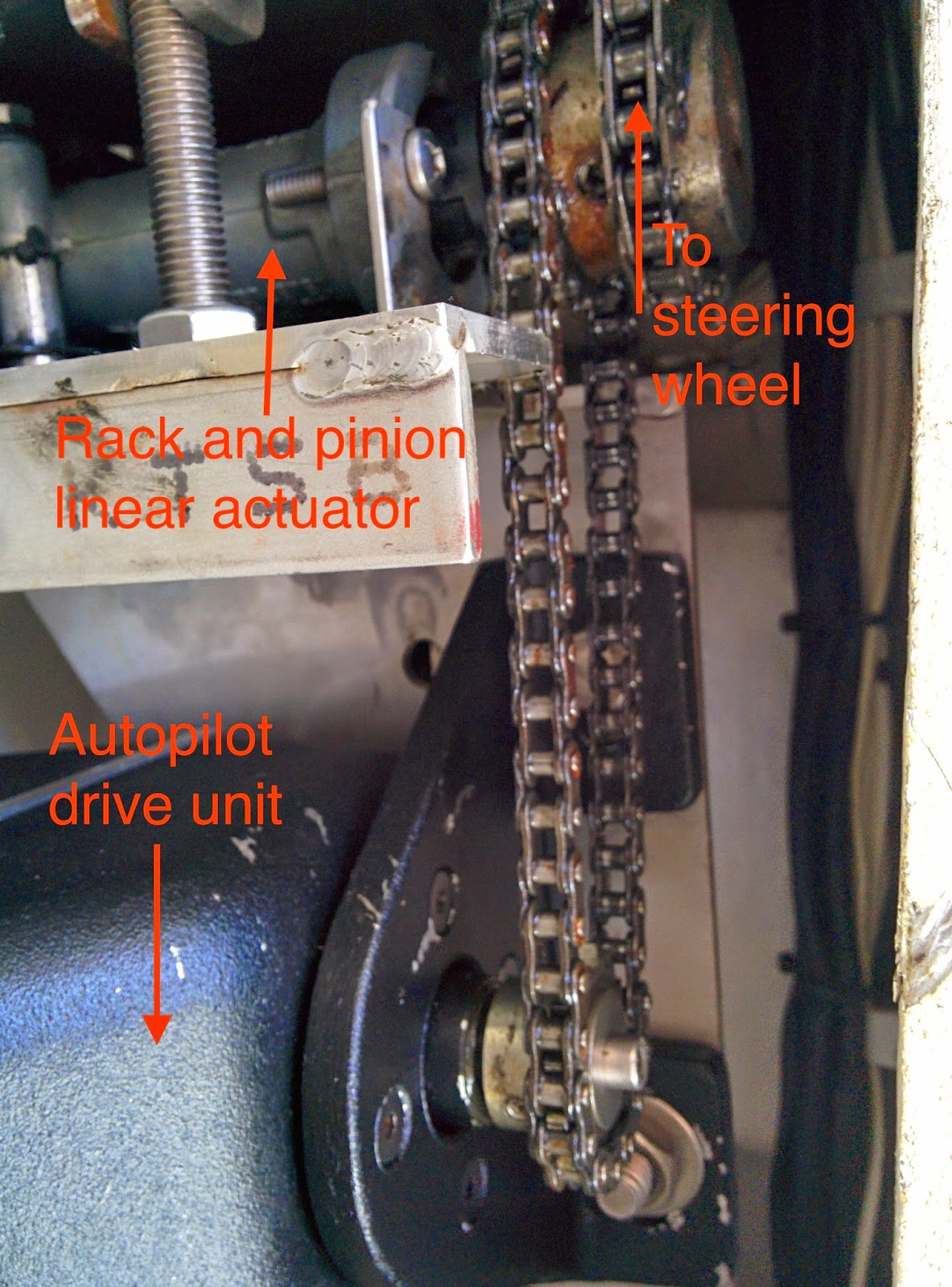 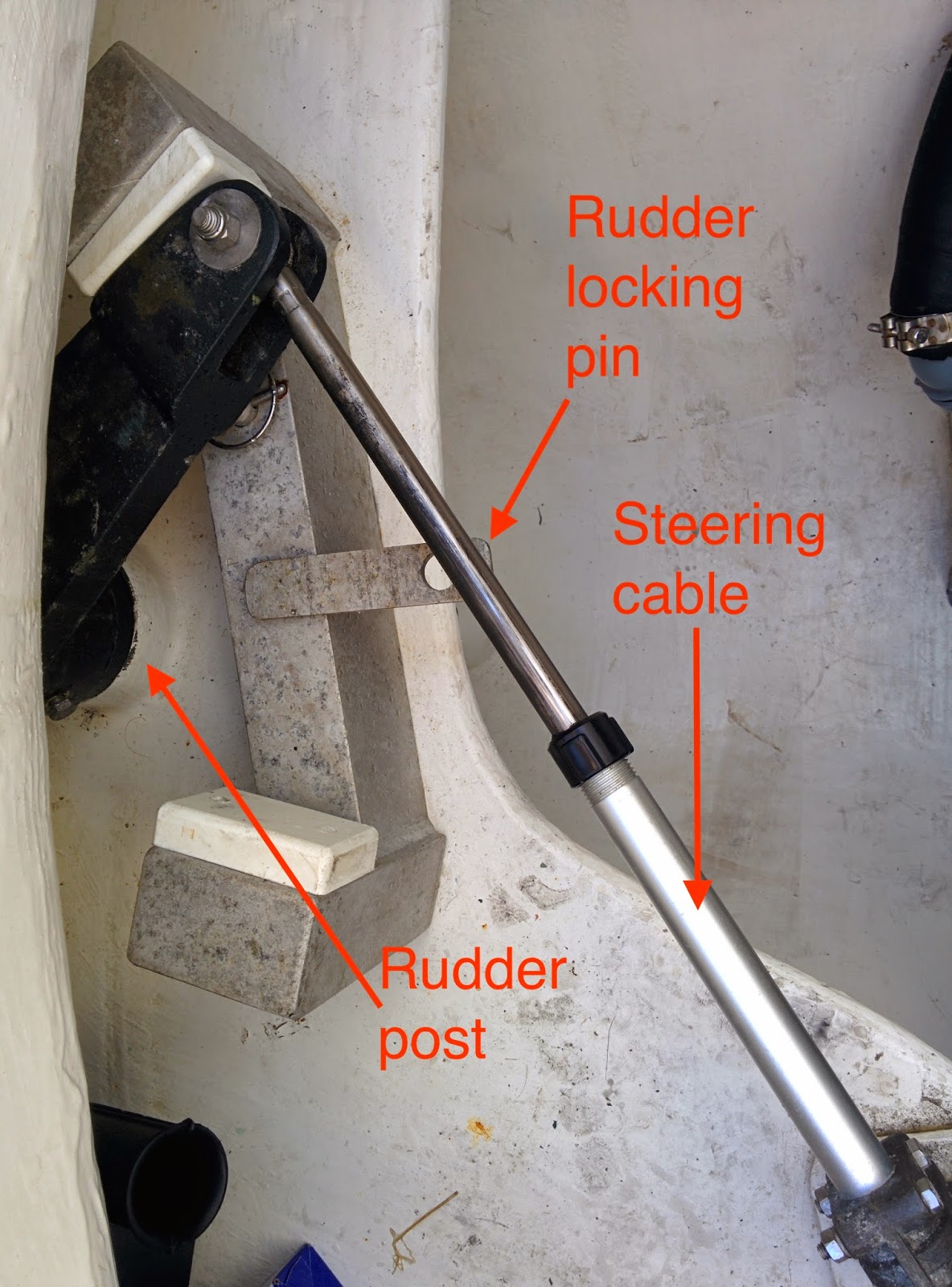 This post summarizes what I've learned about emergency steering but I’m very interested in learning from others. Please chime in.