Cruise: Edithburgh and Troubridge Island in a weekend

June 02, 2014
Sometimes the weather god smiles upon us, and when it does we sailors need to make the most of it. Noting that a passing cold front meant the wind would shift from NE to SE over a 24-hour period that happily coincided with my weekend, I determined this would be the perfect time to sail somewhere south. 40 nautical miles to the WSW lies Troubridge Island, off the SE coast of Yorke Peninsula. That would do nicely!

Departure time was set at the brutally early hour of 05:50, a full hour before sunrise. This was mostly deemed necessary to make it across to Yorke Peninsula before the pub stopped serving lunch at 2pm (a common cut-off time in country towns, especially during the winter). It also meant there would be a couple of hours to spare before settling in for the evening.


I put off raising sails until first light, instead motoring for that first hour with nary a star in sight. The winds were lighter than forecast, and lacking a spinnaker, my route extended to 47 nautical miles, taking 7 hours 40 minutes. The autopilot did most of the work though while I caught up on my reading - while maintaining a proper watch of course! (BTW, I’m currently reading the “The Last Grain Race” by Eric Newby.)

About 3 hours in and ⅔ of the way across the Gulf, the massive silos at Port Giles came into view; they could be easily confused for a huge super tanker from a distance. 30 minutes later it started raining and the wind dropped to only a few knots, so down came the sails and on came the engine. Nevertheless, by 13:30, more or less on schedule, Arriba was anchored in Edithburgh, a short distance north of the Fishermens’ Wharf, in the company of another 4 yachts on moorings.

As I walked through the door of the Troubridge Hotel I noted with pleasure that it was only 1:45pm. Yay, 15 minutes to spare! Alas, business was slow and they’d decided to stop serving lunch. The bar tender thought that the Edithburgh Hotel might still be serving, but I was told if it was a burger I was looking for, I should try the Garage Diner, just up the street. So Garage Diner it was, and the burger "with the lot" was indeed good.
After lunch it was still raining lightly, so I decided to visit the local museum to learn a bit more about the area (and to get inside out of the rain). 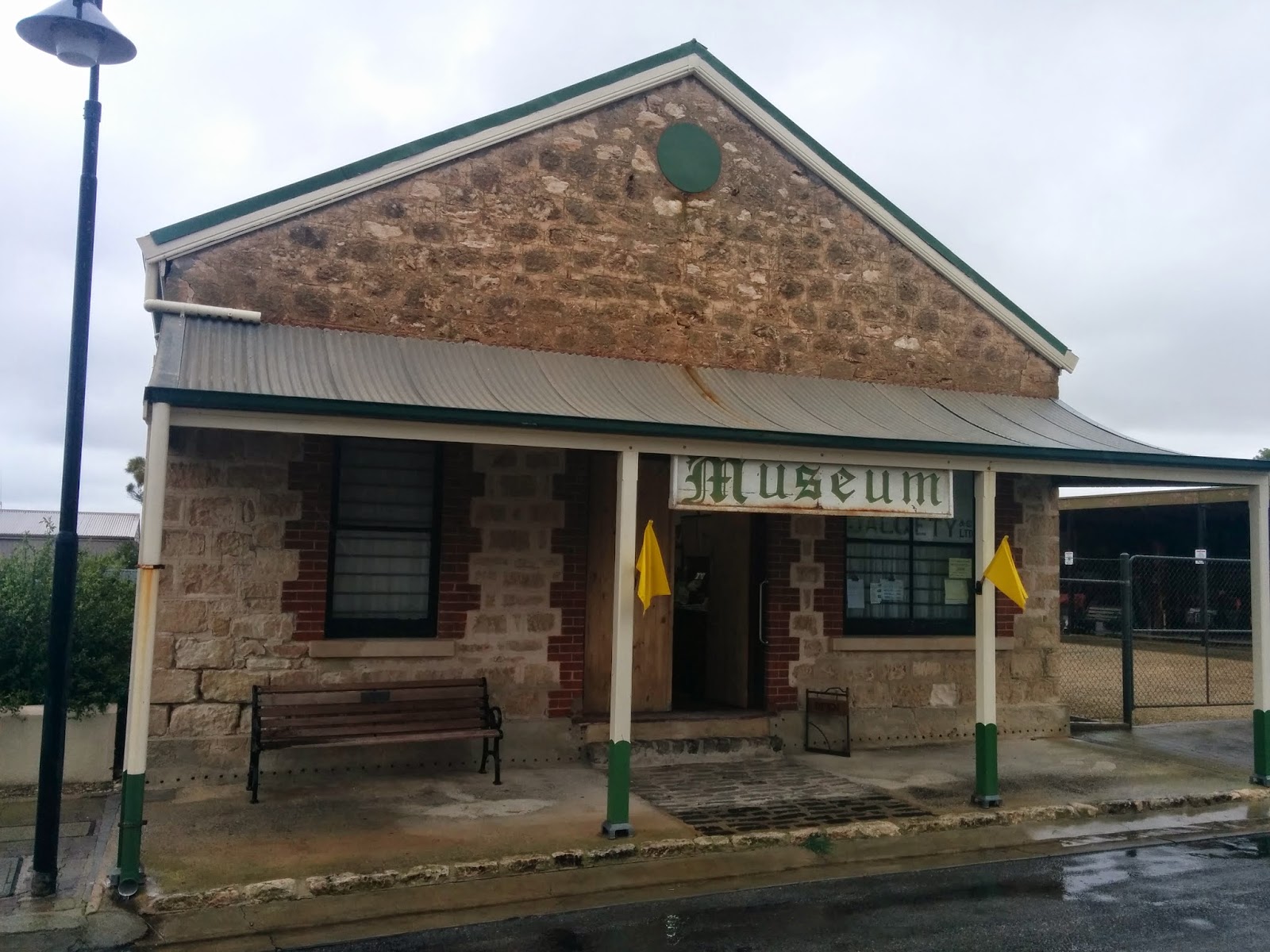 Edithburgh is a charming little town which has clearly seen grander days. Before Port Giles to the north was built, Edithburgh was the bustling port for Yorke Peninsula's substantial grain exports. Lots of old buildings, such as the "Edithburgh Agencies" building attest to its important past. 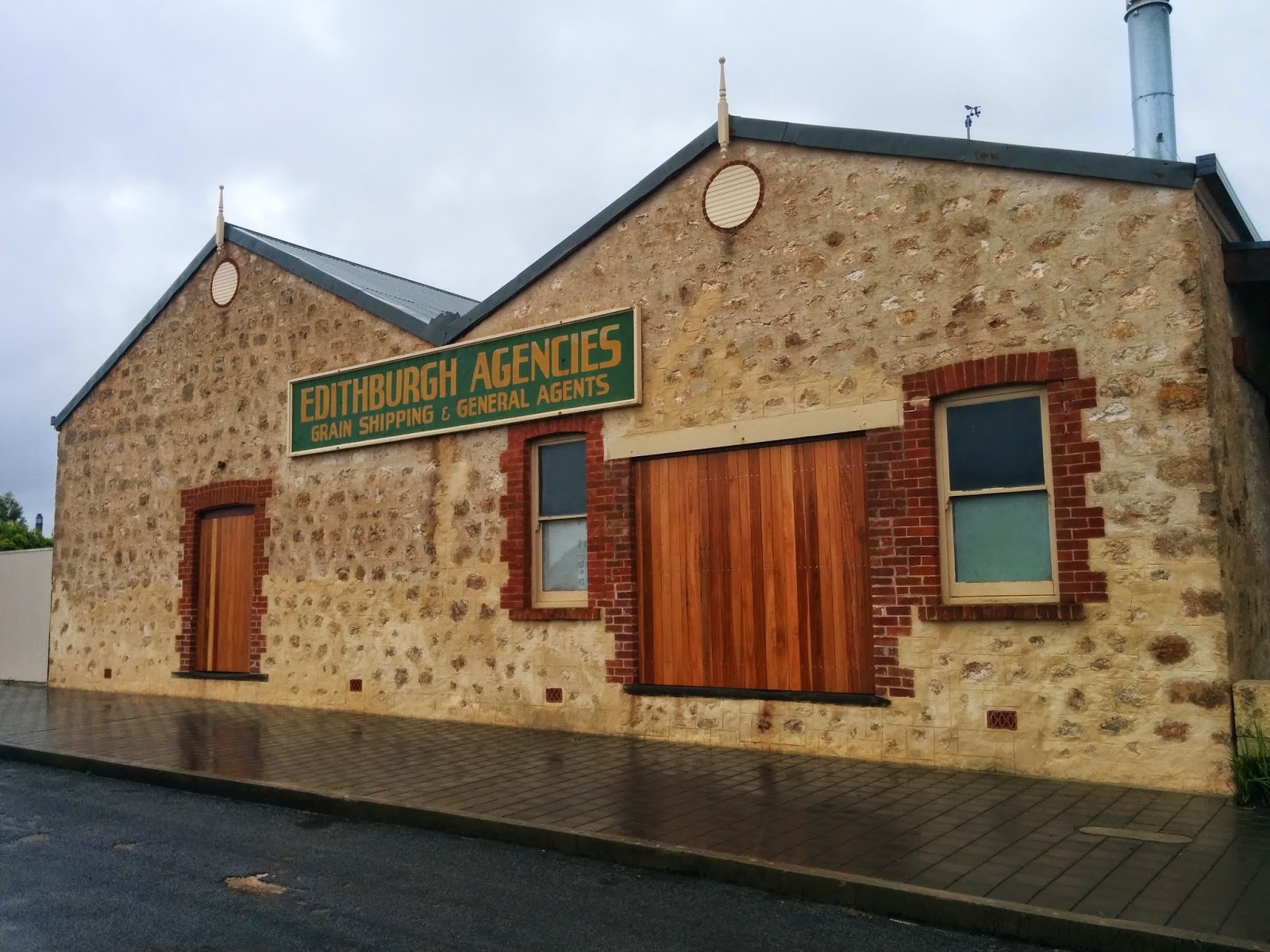 The trouble with Edithburgh is that it is a rather poor choice of location for a port. Lying offshore are extensive shoals that have been the cause of 33 wrecks and hundreds of groundings. In 1850 seven vessels ran aground in just one 8-month period. This prompted the construction of lighthouse on nearby Troubridge Island, which was completed in 1855. It was only the 2nd lighthouse to be built in South Australia, which had been founded less than 2 decades earlier.

Troubridge Island is the permanently dry part of the shoals, and like most shoals is waging an ongoing battle with the sea. The lighthouse, which was once in middle of the Island, is now on the northern tip, which the seas encroaching upon its base. In the middle of the shoals is a "U" shaped body known locally as the "Cutter Patch" which offers protection from all but NW and W winds, and is only 4 nautical miles from Edithburgh.

Note: The Cutter Patch evidently got its name from the favorite anchoring spot of the cutter that used to bring supplies out to the lighthouse. 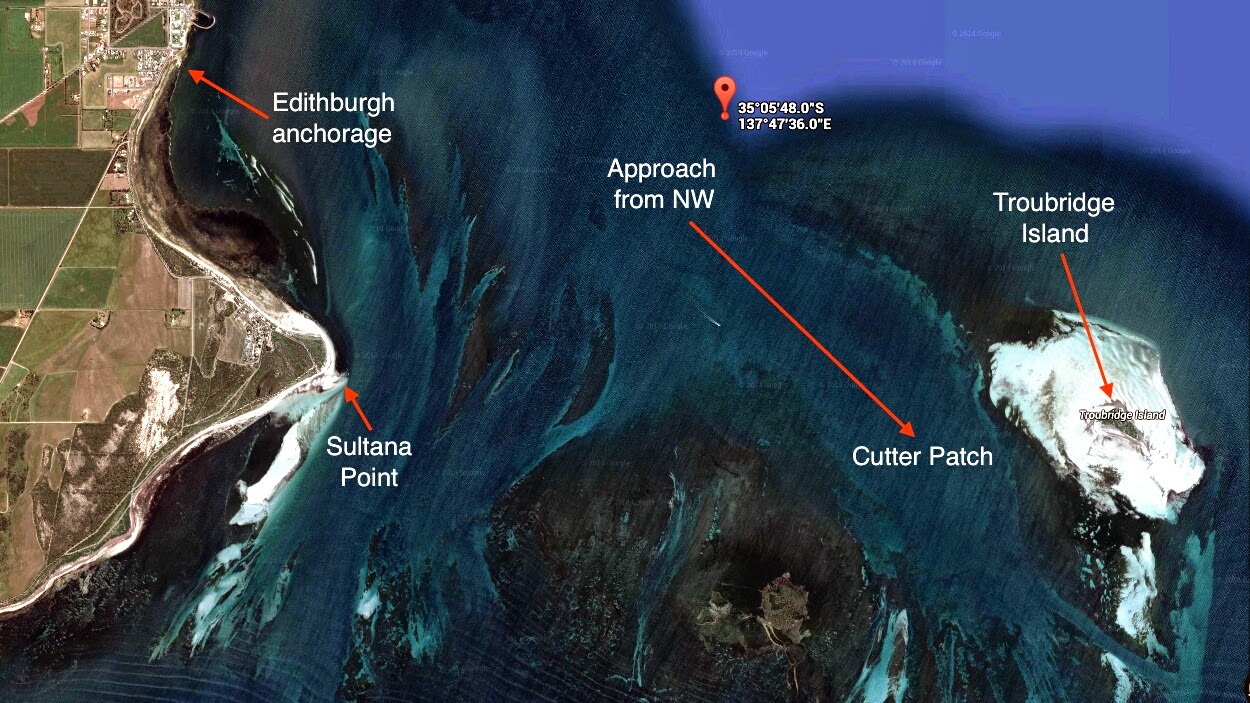 With the wind forecast to swing to the SE, the "Cutter Patch" was my chosen anchorage for the evening, and I settled on a spot about 500m SW of the Island.

The Island is a Conservation Park since it is an important breeding area for birds, with large colonies of Little Penguins, Black-Faced Cormorants and Crested Terns. Access requires a permit, which I'd neglected to arrange ahead of time, but I was granted one verbally by calling the manager, Chris Johnson. Going ashore would have to wait till Sunday though.

The next morning I was up at the crack of dawn, and was rewarded with a spectacular sunrise. 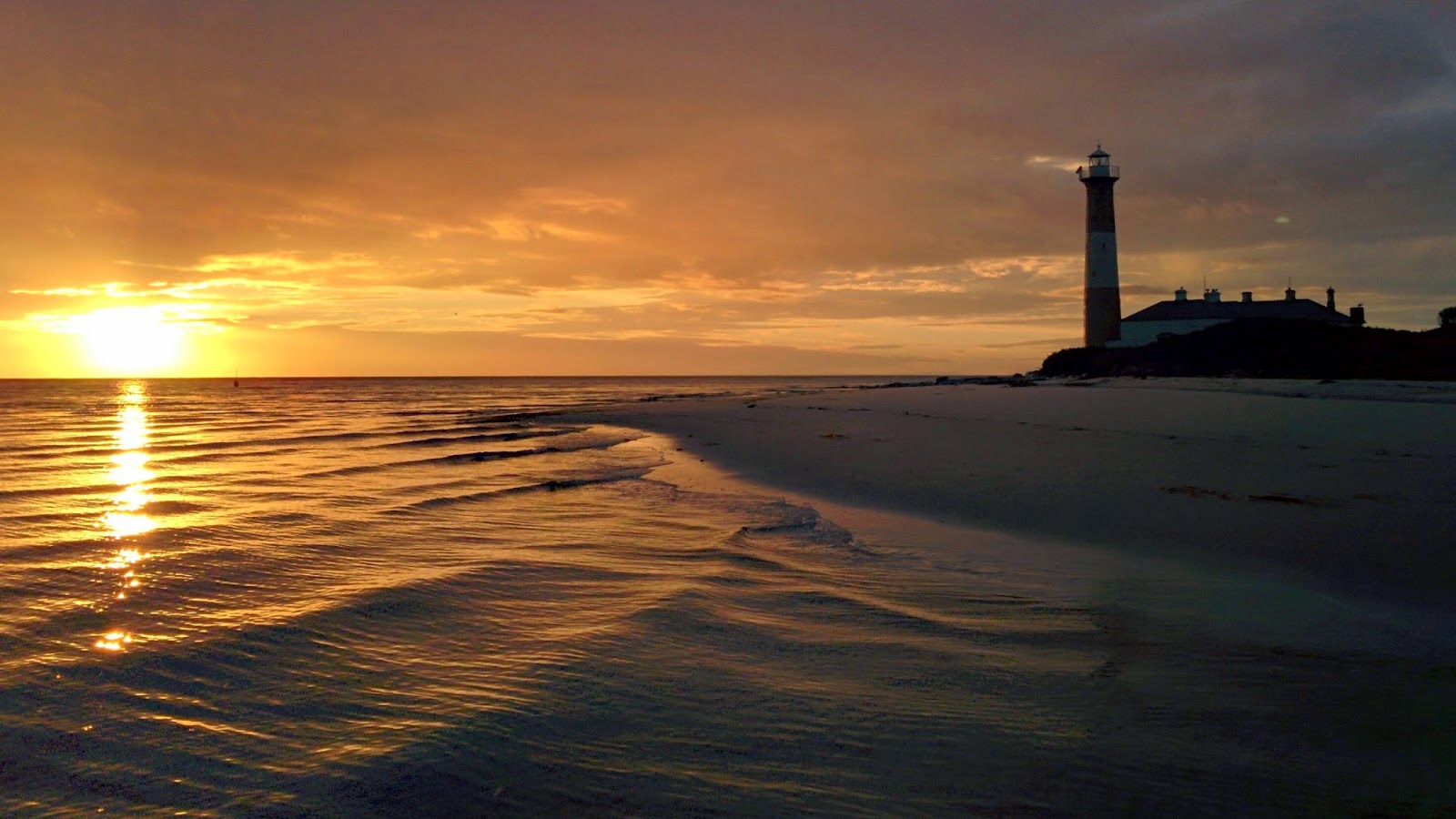 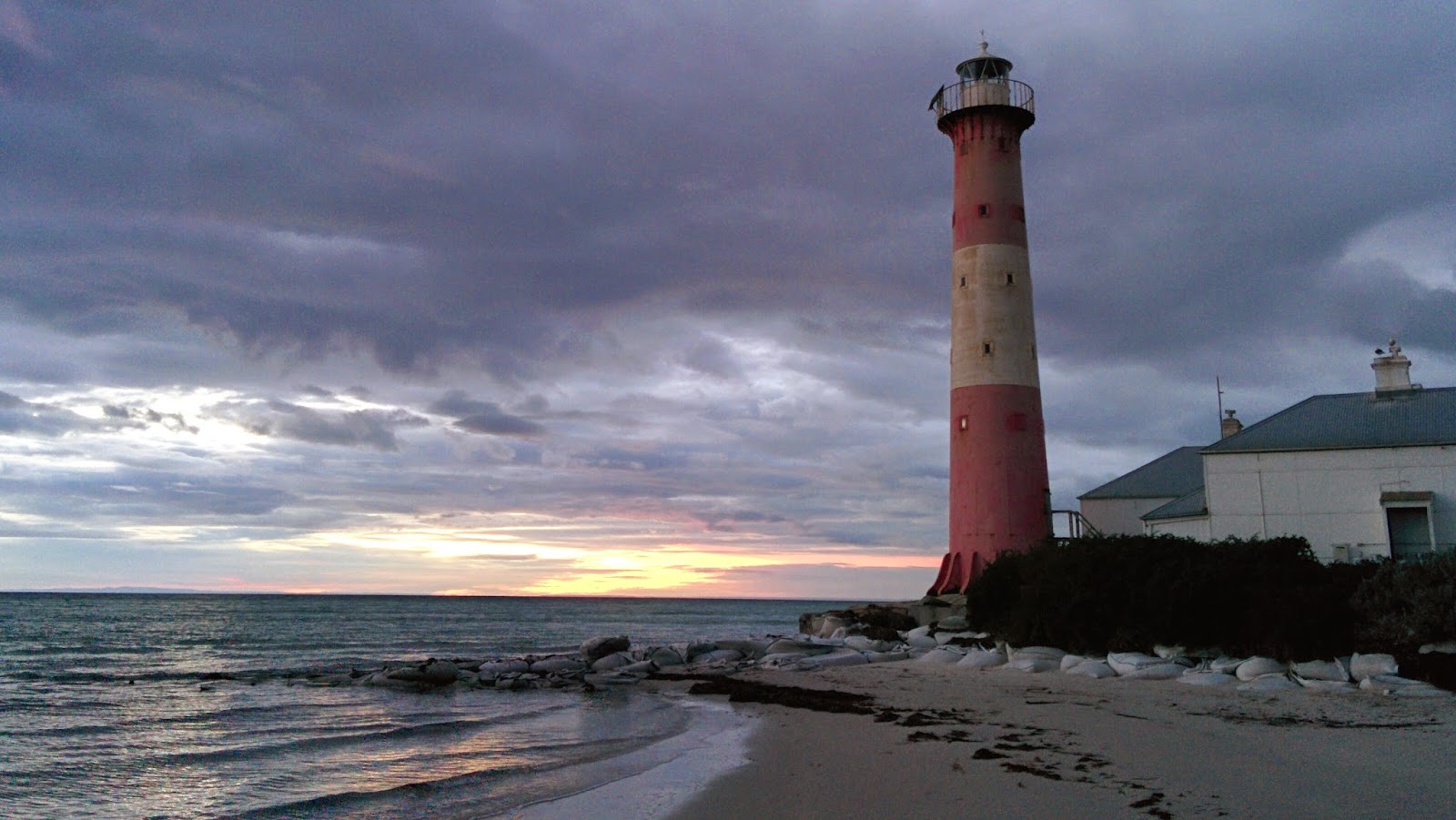 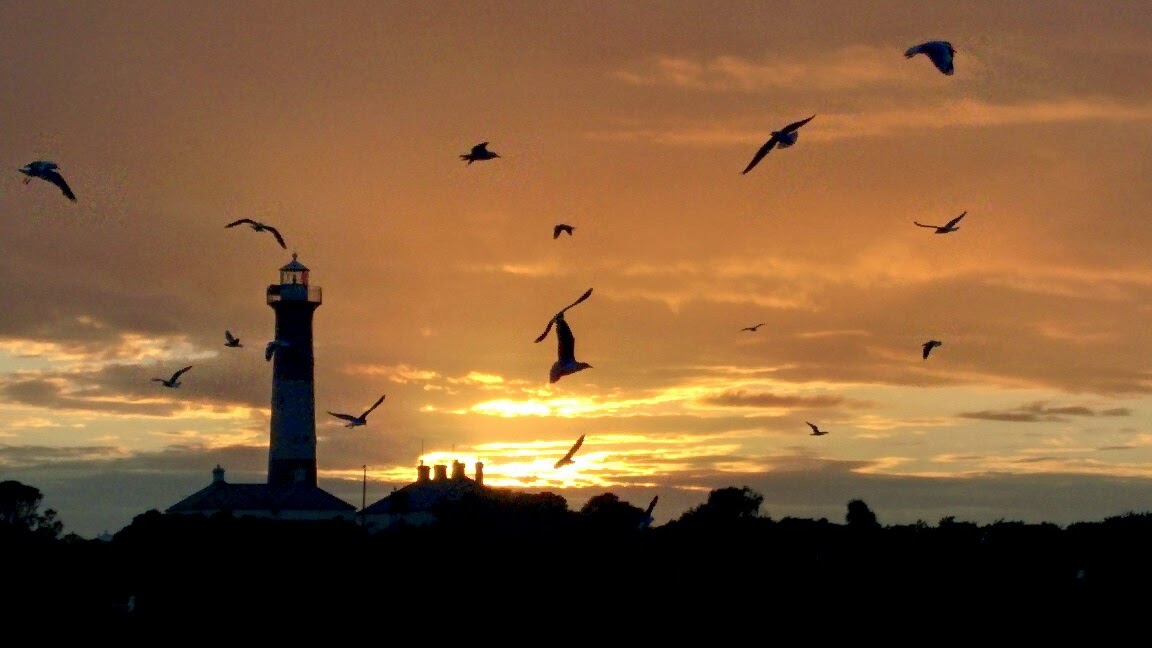 The old lighthouse cottages can be rented, but no one was home, so I had the Island to myself. Myself and tens of thousands of birds that is. I have never seen so many birds, and heard such an avian din before!

It only took 10 minutes to walk around the Island, and just as I completed my circuit a beautiful rainbow appeared to frame Arriba. 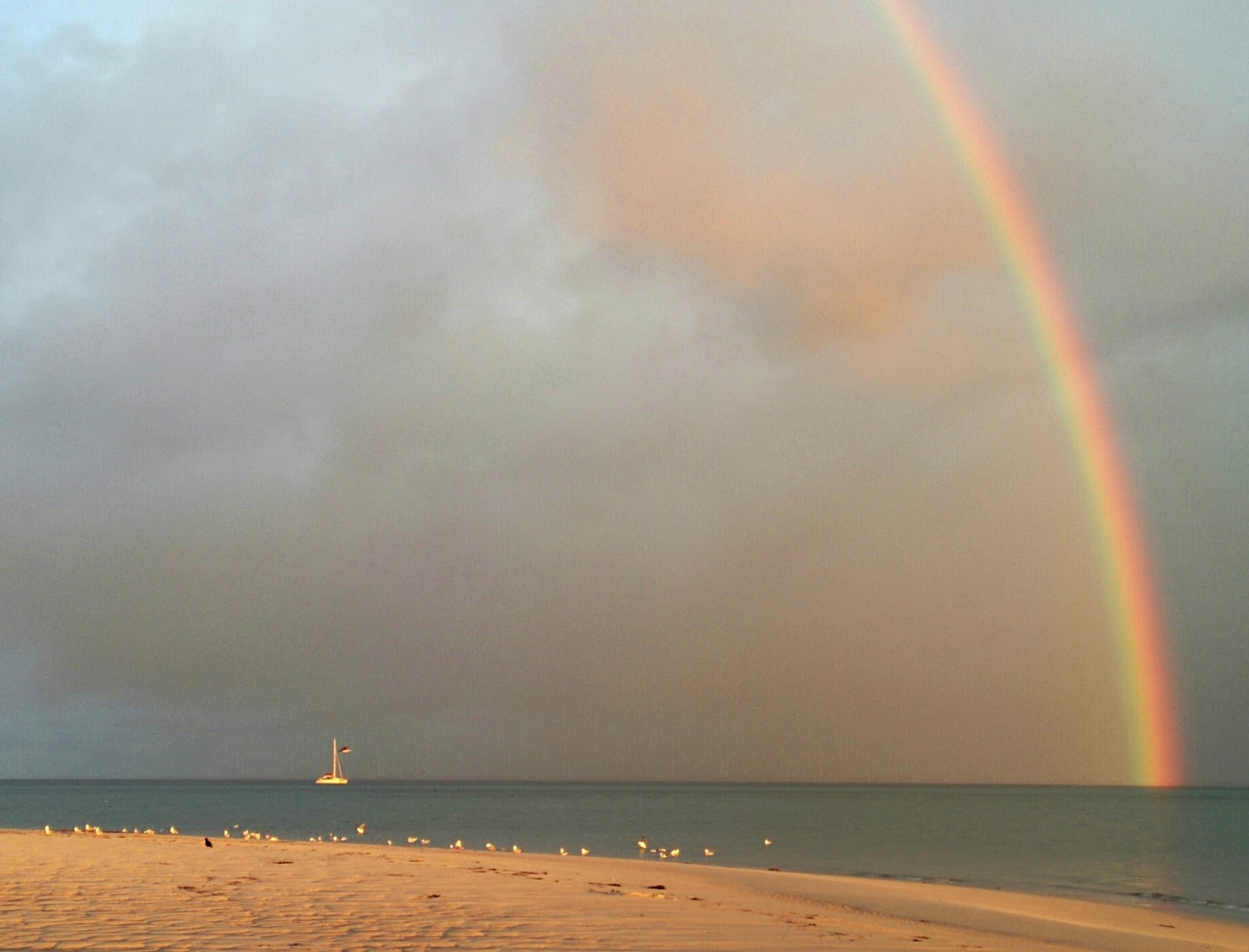 A long day of sailing awaited though so I weighed anchor at 9am and gingerly exited the Cutter Patch to the south. OK, strictly speaking, I programmed the route into my chart plotter and let the autopilot do the work for me. Having cleared the shoals I set my course for North Haven. The winds were from the SE as forecast but light, so I motor-sailed on one engine to top up my speed, averaging 6.5 knots. The return journey of 46 nautical miles therefore took 7 hours.

Having sampled Troubridge Island, I'm hooked. I would like to return again during the summer and enjoy its crystal-clear waters.