April 17, 2014
This is the final post in the series chronicling our sailing trip back from Port Lincoln to Adelaide. As you may recall, at last count we were moored in beautiful Western River Cove on Kangaroo Island.

I awoke the next morning with an urge to get wet (again), so I snorkeled around the rocky reef lining the western side of the Cove. Even though it was overcast, visibility was over 10m and fish life was abundant.
Sadly, there was no time to linger as we had a long day of sailing ahead of us. I wanted to make it to our next destination, American River, before sunset, a distant 55 sea miles away. We initially set out under sail alone, but instead of the forecast Southeasterly we ran head on into an Easterly, so we resorted to motor sailing in order to point higher.

Note: Close to shore the tall coastal cliffs tend to channel the winds such that a SE becomes an easterly and a SW becomes a westerly.

As the rugged North Coast of Kangaroo Island slipped by, I made a mental note to myself to revisit some of the places we passed. 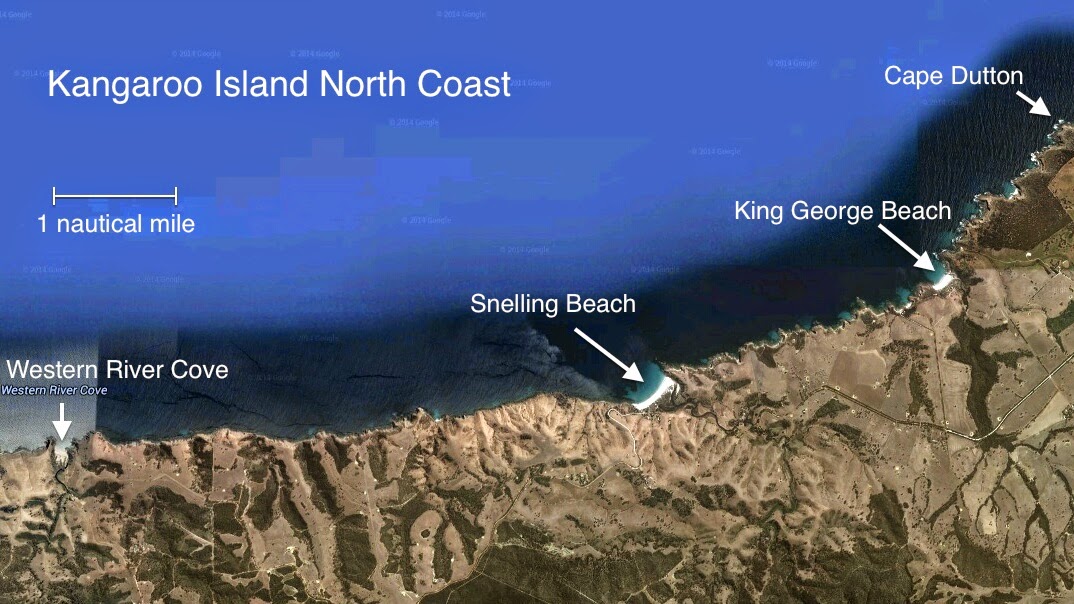 At the 5nm mark, we pasted beautiful Snelling Beach (35°40.07’S 137°4.34’E), with 500m of gorgeous sandy beach running SW to NE sandwiched between rocky headlands. There were also extensive rocky formations and tide pools at the base of each headland that are no doubt teeming with sea life. As an anchorage though it would be quite exposed to any westerly swell.

Note: Watch out for the reef which extends several hundred metres from the NE point.

At the 7nm mark, we passed the smaller and more protected King George Beach (35°39’S 137°7.1’E). This cove would offer excellent protection from NE and S and is reported to be one of the nicest anchorages on the North Coast. Next time...

We passed lovely Emu Bay at the 30nm mark. I'd moored here inside the reef located on the western side of the Bay in December 2012.  Emu Bay is protected from SE through NW, but it is still exposed to some swell.  Not too bad in a multihull though, but probably uneasy in a monohull.

At the 37nm mark, we finally rounded North Cape and set course on a SE heading for Ballast Head.

At 19:00,  9 1/2 hours after departing Western River Cove, we dropped anchor in American River. I've moored in American River so many times now, I've come to regard The River as my "home away from home" on the Island. Everyone was particularly excited to be going ashore to enjoy our first restaurant meal in 5 days and experience the hospitality of Peter Hogan, who runs the American River Lodge.
We had a fantastic night and stumbled back to our dinghy, somehow making it back to Arriba without falling overboard.

The next day marked our sixth and final day since leaving Port Lincoln. The wind picked up early and we screamed across Eastern Cove in ~20 knots with full mainsail and gennaker. We were enjoying ourselves so much, that I forgot the cardinal rule of crossing Backstairs Passage - reef early! Specifically, when coming from the mainland, reef before you pass Cape Jervis; and if coming from Kangaroo Island, reef before you exit Eastern Cove. My other rule is to check the tides (see the BoM tide calculator) and avoid wind against tide, and if possible, cross at slack water. Anyway, I broke both rules, and before we knew it we were way overpowered in 35 knot gusts.

After a bit of a struggle we furled the gennaker and unfurled the jib in its place, and Arriba settled into a more comfortable rhythm, cruising along at 8+ knots. I considered it too late to reef easily in the 3.5m swells so I made the call to continue under full mainsail. We were still somewhat overpowered in the gusts, but before no time we were abeam of Cape Jervis. We covered the 33nm to Rapid Bay in well under 4 hours.

Everyone was happy for some respite from the swells and we enjoyed a calm barbecue brunch at anchor. We still had another 53nm to go though, so we couldn't linger for too long.

Alas, all good things must come to an end, and around sunset we pulled into North Haven, seven days and over 400 nautical miles later.