Tech: Arriba gets an anchor upgrade

January 25, 2013
It's 2 am and you're suddenly awakened to the sound of a shrieking alarm! You find yourself adrift in unfamiliar waters, anchor dragging, and it's pitch black outside. This is not a particularly nice way to wake up, but this is exactly what happened to me when I was anchored in Apostle Bay off Whitsunday Island (Queensland) in a charter yacht in November 2010. I doubt that many boaties have completely avoided dragging their anchor from time to time; I may have done it more than most though.

Like many first-time boat buyers, when I purchased Arriba in 2009, I gave literally no thought to the anchor.  Despite the fact that the anchor is one of the most important pieces of equipment on board, I thought that "the boat designer chose the right anchor for the job" - so it didn't warrant further attention. And thus I lulled myself into a false sense of security for several years. Recently though, I've become something of a connoisseur of anchors. I now tend to think that the anchor is often an afterthought for boat designers and builders, and even then the choice is likely influenced by historical preferences and local conditions.

My anchoring epiphany came after one anchor dragging incident too many - at a local spot I'd successfully anchored at many times in the past. How could my finely honed anchoring technique have failed me so badly? I had let out over 25m of chain in a measly 3m of water, i.e., a scope ratio of greater than 7:1, and the anchor had held firm for over 24 hours. But then the wind rapidly changed direction and the seas picked up and in a flash my anchor was ripping through the seagrass, refusing to grab hold again.
Arriba came with a 20kg "CQR" plow anchor that is quite common gear on cruising catamarans (the anchor on the left in the photo). It's light, compact, time tested and proven; and for it's day it was undoubtedly very good. It's day, however, was  a very long time ago as it was invented in 1933, over 80 years ago.

As it turns out, CQR anchors are notoriously bad at resetting once they lose their grip, especially on weedy seabeds. Such an incident may have been the cause of this yacht running aground on the rocks at East Kangaroo Island, Tasmania (incidentally, no relation to Kangaroo Island, South Australia). I therefore deemed it high time to invest in a new anchor! 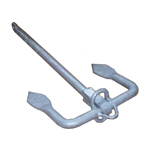 Where I live and sail in South Australia, the two large gulfs most frequented by yachties - Gulf St. Vincent and Spencer Gulf - are covered in beautiful seagrass meadows. Many SA boaters, in particular local fishermen, swear by stockless anchors (at left), due to their ability to penetrate weed. Stockless anchors are an even more ancient design than the CQR, having been invented in 1823. Somehow, I just could not stomach the thought of using technology almost two centuries old.

After doing a lot of research I ended up selecting a 25kg Rocna, which was developed by New Zealander Peter Smith in 2000. He writes this interesting article about the design of the Rocna, which obtained the highest averaged holding power in SAIL magazine's comparison testing in 2006, and more recently the highest holding capacity in Practical Boat Owner's testing 2011.
I've only owned my new Rocna for a couple of weeks but I've already noticed the improvement. For the first time ever, when I weigh anchor at one of my favorite weed-over-sand anchorage, I'm seeing mud on the tip of the anchor, which indicates that the Rocna is digging in much deeper. As you can see in top photo, the area of the fluke (or blade) is massive compared to my old CQR, and the extra 5kg in weight helps too (the helpful folks at Rocna suggested upsizing). The Rocna's roll bar makes it less compact than a CQR and the bent shank means it sticks up slightly, but that is a very small price to pay for the extra holding power.
If you've not given much thought to your anchor till now, I'd encourage you to do so. There's a whole new world of modern anchors awaiting you out there.

PS I've since put my Rocna to the test hundreds of times over 3 years. [March 2014]
aground anchor anchoring mistake tech Whitsundays