October 29, 2012
Back in February, I sailed Arriba from Adelaide to Kangaroo Island (KI) and back with some friends from work. It was my first time sailing to KI, and I'd hoped for perfect conditions. Fortunately, Mother Nature did not disappoint.

Since there were quite a few non-sailors on board we toodled around offshore from North Haven (Adelaide) for a couple of hours giving everyone a chance to take the helm. With the crew suitably broken in, we then dropped anchor off Henley Beach for a lovely sunset dinner ferried by dinghy from the local Thai takeaway place.

We up anchored and set sail at 9:30pm, with Island Beach as our destination, 62 nautical miles away (115 km) to the SSW. I chose to depart late at night to take maximum advantage of the ebb tide, and also the forecast swing in the wind direction from SW to SE. Further, I did not want to cross Backstairs Passage in darkness on my very first attempt.
The sun rose just as we entered the Passage. We promptly furled the jib and unfurled the screecher. Boosted by 1.5m swells rolling in from behind, our boat speed reached 15 knots at times. Then, almost magically, we were in the calm waters of Eastern Cove. In total, sailing from Adelaide to Island Beach had taken us 11 hours, averaging just under 6 knots.

Saturday was a day of either lazing around or fishing near Ballast Head, where silver trevally were the catch of the day. 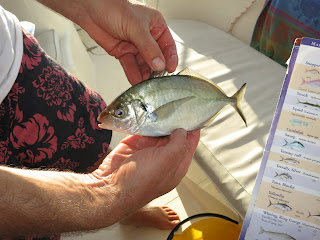 On Sunday, after the mandatory big brekkie, we departed for home at 9:30am. The forecasted South Easterly winds did not materialize so we motored most of the way. Sunday's Backstairs Passage bore no resemblance to 24 hours earlier with nary a breeze nor swell. The gentle conditions were a boon to dolphin watching, however, and we were treated to a dozen visits by pods of dolphins.

We paused at Rapid Bay for a bbq lunch and a swim. We also stopped in at Normanville to let some folks off and to stock up on ice cream.

Rather than push on to North Haven in darkness, we dropped anchor at Seacliff for the night, just in time for a glorious sunset.

Overall, I would rate it as a perfect introduction to Kangaroo Island sailing. Next time I'm staying longer though - much longer!