We awoke to a light southwesterly wind and weighed anchor at 05:55. Tasmania’s rugged south coast offers very little in the way of refuge from that quadrant and so the next safe haven would be Southport, seventy nautical miles away. An hour later we passed the aptly-named Pyramid Rocks (top photo).

At 08:40 we rounded the first of Tasmania’s three southern capes, Southwest Cape. Shortly after rain and fog set in and the mainland off our port bow vanished from view. Fortunately, we were not denied spectacular coastal views for long as the sun reappeared and banished the fog.
The swell was less than 1m and the fickle winds seldom exceeded 3 knots. We continued motoring on a course slightly south of east and passed South Cape at 14:00, four minutes in latitude south of Southwest Cape. Fifty-six minutes later we rounded South East Cape, Australia’s most southerly point. We had now left the Southern Ocean and entered the Tasman Sea, the body of water that separates Australia from New Zealand.

A six-knot breeze set in at 15:30 – eventually rising to 10 knots – encouraging us to raise the mainsail. The sailing was short-lived as an hour later the wind dropped to four knots. At 18:02 we anchored in Southport, east of Police Point, the waters mirror-flat except for the occasional jet-skier disturbance. This leg of our journey could well have been the most challenging but had turned out to be one of the most relaxing.

The following day we weighed anchor at 05:57. Our destination, Hobart, was only 42 nautical miles away but I was keen to arrive there with plenty of daylight. With every passing mile, the trappings of civilization asserted themselves more fully, first the occasional and solitary dwellings surrounded by thick coastal forest, later townships and farms, and eventually the suburbs of Hobart. Turning into the estuary of the Derwent River, engendered mixed feelings: relief at safely reaching this protected body of water and sadness in the knowledge that this stage of our voyage was coming to an end.

At 13:25 on 16th January 2022, we tied up at Berth E of the Royal Tasmanian Yacht Club (RTYC). Boat maintenance tasks dominated the next couple of days, notably sail repairs, ordering and installing spare parts, including a new freshwater pump, and repairing a reefing line that had snagged inside the boom. There was also ample time for sightseeing and getting to know Hobart. The charming Shipwright Arms Hotel in nearby Battery Point became our new watering hole. 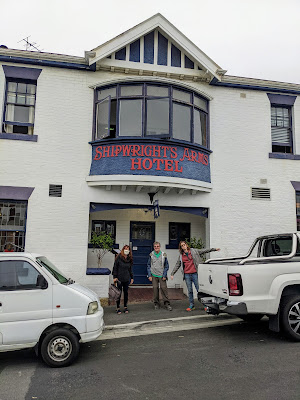 The RTYC would be Arriba’s home for five weeks while we resumed life as landlubbers back in Adelaide.