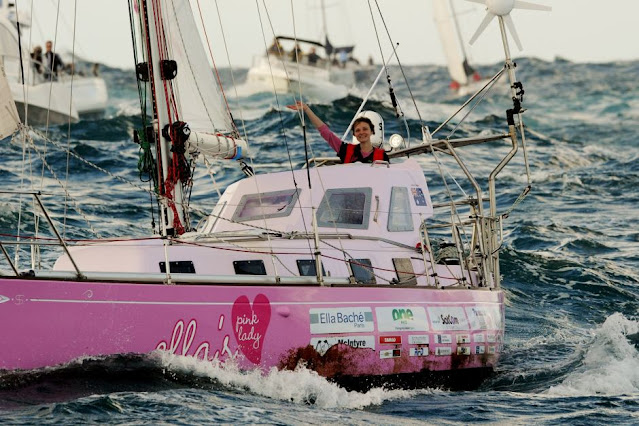 The first, Mary Bryant, was a convict transported from Cornwall to the fledgling penal colony at Sydney, New South Wales. She may be a contentious candidate for inclusion, as she was not a sailor by choice but the only woman in a crew of nine who completed a voyage of 5,000 km in a small open boat. On 28th March 1791, Mary – along with her husband, their children, and seven fellow prisoners – stole Governor Arthur Phillip's six-oared cutter in Sydney. One of the prisoners, William Morton, knew how to navigate and they reached Kupang in West Timor sixty-six days later. This required negotiating the treacherous and poorly-chartered waters of the Great Barrier Reef. Their little-known voyage is just as remarkable as the one undertaken by William Bligh two years earlier, after the infamous mutiny on the Bounty. Mary was arrested and sent back to England but she avoided the gallows, which was the usual punishment for escaped convicts. She was later freed and returned to Cornwall.


Next is Mary Patten, an American from Massachusetts. In July 1856, the clipper ship Neptune's Car left New York City for San Francisco with Mary’s husband, Captain Joshua Patten, in command. Mary, who had married three years earlier, had already been on several voyages with her husband who had taught her how to navigate. As the ship rounded Cape Horn, Captain Patten fell seriously ill. Normally, the first mate would have been put in charge but the captain had previously relieved him for dereliction of duties. The second mate could not navigate so Mary instead assumed command. Fifty days later, in November 1856, she successfully completed the voyage in San Francisco. In doing so, Mary became the first female in US history to command a merchant vessel. This story is the subject of Douglas Kelley’s 2002 novel, The Captain's Wife.

Women attained the right to vote for the first time in 1883 in New Zealand but another half a century would pass before women assumed the permanent rank of captain of ocean-going merchant vessels. That honor goes to the Russian Anna Shchetinina. Her first voyage as captain in 1935 saw her command MV Chavycha on its maiden voyage from Hamburg to Odessa and then onto Vladivostok. A few years later, during World War II, she commanded a ship that evacuated people from Tallinn under enemy fire.

A decade later, Australian sailor Kay Cottee became the first woman to complete a non-stop and unassisted single-handed circumnavigation. Her yacht, Blackmores First Lady, was 11 m (37 feet) long. The easterly circumnavigation took 189 days and set a record for the fastest sailing trip around the world by a woman. The Southern Ocean produced high winds and big seas. The following is an excerpt from her book, First Lady.

“Early in the evening, I heard a tremendous roar. It grew steadily louder. I shuddered as the bow rose higher and higher until the boat was almost vertical, then we leveled out. I knew the boat was completely out of the water…”

Finally, Jessica Watson is another Australian sailor who circumnavigated the globe solo. Watson departed Sydney on 18 October 2009 in her 10.23 m (33.6 ft) yacht, Ella's Pink Lady, returning 210 days later on 15 May 2010 – three days before her 17th birthday (top photo). At the time she was the youngest person to sail around the world but, unfortunately, the voyage was deemed shorter than the 21,600 nautical miles required by the World Sailing Speed Record Council to be considered an official global circumnavigation.

Six very different women, spanning two centuries, but all remarkable in their accomplishments.