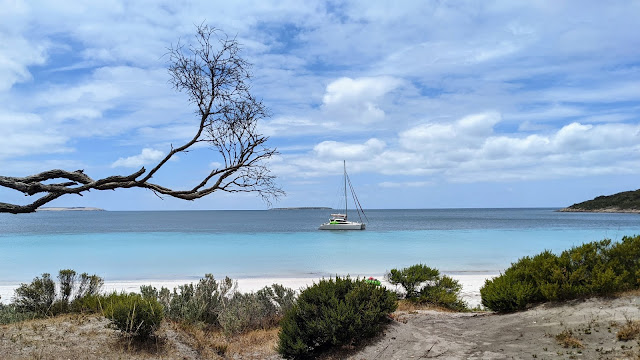 Cathie and I took the dinghy ashore to explore the beach adjoining Leven Beach Conservation Park. The beach was covered in shells and we could not resist collecting a few. The find I treasured the most, however, was a piece of driftwood with remnants of half a dozen or so Angasi oysters. Oysters are normally reef builders, but these hardy specimens had colonized a floating branch instead and put to sea. 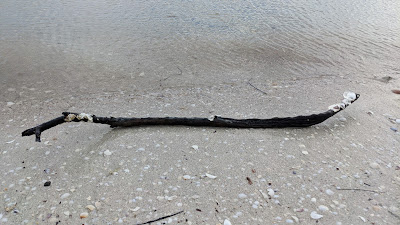 Oysters on driftwood.
At 09:47, we weighed anchor and retraced our previous day’s path as far as Corny Point. We sailed with reefed main and gennaker (screecher) enjoying a 14-knot breeze from the SSE. I had reefed in anticipation of the winds picking up once we were beyond Corny Point.

Once past the point, we struck out west into Spencer Gulf. The anticipated winds did not materialize though and at 12:30 the wind dropped to 5 knots. I furled the gennaker and motor sailed keeping the mainsail up, hoping to take advantage of any favorable puffs. Instead, by 14:00, we were becalmed.

Around then, I also noticed that the lowest batten car had detached from the mainsail mast track. By way of improvisation, I fashioned a rope to pull the luff of the sail closer to the mast, but instead of looping the rope through a grommet, I looped it through the, now detached, batten car. When I cinched it tight I inadvertently destroyed the batten holder. I tried again, this time looping my rope through the grommet, which seemed to do an okay job. I did not notice then that an excessive force was being placed on the batten cars higher up the mast.

Half an hour later, it started raining, and shortly thereafter we were beset with squalls and 22 knots on the nose. I was determined to reach our destination by nightfall and so I decided to motor sail on one engine instead of bearing away and sailing. The seas built up quickly, and within an hour we were punching into 1.5m seas, and at times our speed dropped to 3 knots. I did not bother lowering the mainsail until 17:00, which in retrospect was a mistake.

At 20:24, with light fading, we pulled into Whaler’s Bay on Thistle Island, anchoring at low tide in 1.5m depth. There is a second anchorage on the eastern side of the island at Waterhouse Bay and a third on the northwest side at Mittler’s Cove.

Whaler’s Bay is overlooked by a motley collection of houses but, fortunately, this is not indicative of what the rest of the island has to offer. The eastern side of the island mostly consists of white sandy beaches interspersed with occasional rocky headlands. The western side, which bears the brunt of the harshest weather, is dominated by imposing cliffs rising over 200m high.
My dodgy luff rope combined with motoring into a headwind yesterday resulted in two more batten cars detaching from the mast track. I had visions of a domino effect and them all failing one by one, unable to resist the force of the flailing mainsail. Therefore, I took advantage of time at anchor to reattach all but the lowermost one, which could not be fixed without replacing the batten holder. Arriba would be sailing with a doubly-reefed mainsail for the remainder of the trip. As it turned out, that was no great handicap.

At 09:30, we weighed anchor. Once offshore we picked up a 9-knot breeze from the SE which propelled us at 5 knots. About an hour later, we rounded Observatory Point, the northernmost point on the island, and turned west for the mainland. The wind obligingly picked up to 14 knots and our boat speed increased to 7.2 knots. We were among the islands of the Lincoln National Park, enjoying some of the finest sailing in South Australia.

At 12:30, we were anchored in Memory Cove, with the cove to ourselves (top photo). Well, not exactly. While we were the only boat in the cove, there is a campground ashore with six sites. Memory Cove is within a Wilderness Protection Area and is one of the gems in the South Australian national park system, whether visiting by land or sea.

Swimming ashore, we met up with my son and his girlfriend who had just set up their campsite and treated us to some cold ones. The rest of the day was spent relaxing and swimming, enjoying spring weather at its finest. I prepared Mexican fish tacos for dinner, except I substituted freshly caught squid for fish. I have found that the trick to cooking squid is to tenderize them first by blanching them for thirty seconds in boiling seawater. We all retired to our respective land and sea bunks by 10 pm.
It was 03:45, the anchor alarm was shrieking, and the wind was blowing 12 knots from the northeast. We had not drifted though but merely rotated ninety degrees. I should note that Memory Cove is not safe in a northeasterly wind, but it was 03:45, the anchor was holding fast and, as far as I could tell, we could not hit anything. So I went back to sleep.

By 06:30, the tide had dropped and we were now in 1.4m of water (Arriba draws 1.1m) with our stern only 50m from the beach. It was time to move! The nearest suitable anchorage in a northeasterly wind is Mittler’s Cove on Thistle Island, approximately four nautical miles as the crow flies. I was keen to show my crew the rugged windward side of Thistle Island though, so we sailed for Fossil Point first before doubling back for Mittler’s Cove.

Mittler’s Cove lived up to its description as a calm anchorage. It was also an excellent fishing spot and within an hour Vela caught enough fish to supply us for two meals. By 13:00, the wind was weakening so we left our little sanctuary and returned to Memory Cove. There was still a northerly but it had lost its sting and gradually swung to the west.
Back at the Cove, we enjoyed some wonderful snorkeling along the southeastern shoreline. We then walked along the coastal trail that follows the same shoreline, until Lewis, Hopkins, and Thistle Islands all presented themselves magnificently. That evening, we enjoyed happy hour on the beach before the landlubbers retreated to their tent and the yachties to their vessel. As far as facilities go, the yachties had the better deal.
The next morning we departed Memory Cove at 08:30. This was as far as I had planned our trip. With 20m knots from the WSW, we turned north.