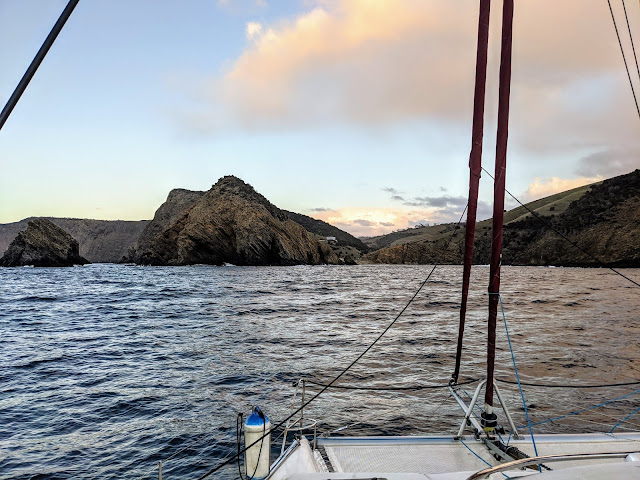 
Last night I had another lovely dream about Susie. She was just lying in bed beside me. We were both naked, our bodies were barely touching but I could feel her warmth radiating. I experienced a delightful feeling of contentedness. And then reality hit. I was rugged up and there was no one beside me sharing precious body heat. It was cold, that particularly damp variety of coldness that pervades watery places, such as boats. As a result, despite having had ample sleep, I found it more difficult than usual rousing myself.

I unhooked Arriba from our Boxing Bay mooring at 06:55. While hooking onto a mooring can require a bit of juggling at times, unhooking is very simple and a one-person operation. Anchoring is the opposite; just drop your pick anywhere and let the chain out while drifting in reverse. On the other hand, raising or “weighing” anchor, requires synchronizing the boat’s position and windlass control. It is possible with one person, but easier with a second person to spot.

I motored out until we were just outside the protection of the bay and raised the mainsail. At 07:15 we were sailing WNW under full mainsail and jib. Our desired direction was due west to Cape Cassini, but initially the best we could manage initially was 10° north of west (280°). Eventually the wind swung a bit more to the south and we could sail due west, albeit now several nautical miles offshore. We stayed on the same tack until well past Cape Cassini but then it started getting rough, so we tacked for shore to reduce the fetch (body of open water). It was that sharp, nasty chop that Investigator Strait and Backstairs Passage produce so well. Waves are often less than a boat-length apart making it impossible for the boat to fully recover from the previous wave before slamming into the next. I dislike upwind sailing, but there is no choice if we’re to have any hope of circumnavigating KI on this trip.

We tacked several more times in and out until reaching Western River Cove at 2:32pm. By then we were ready for a break from the “rinse cycle” action. The cove was calm with just a little swell wrapping around the western headland. We enjoyed a late lunch in very pleasant conditions.


An hour later we raised anchor for Snug Cove which we reached at 5:30pm (top photo). I dropped anchor in the middle of the cove to give us the most room to swing. It is just as well because with the westerly swell wrapping into the cove, we were swinging all over the place. Under such conditions Snug Cove is a little too snug for comfort, but we were done traveling for the day, so here we stayed. In retrospect, I wish we’d stayed at Western River.