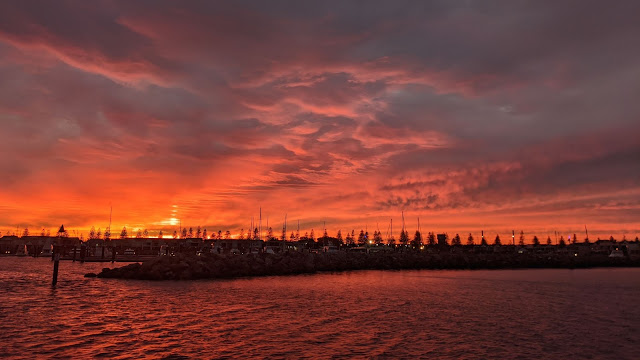 Dear readers: I'm blogging this trip as I go (when I have internet), not after the fact.

This morning I beat my 05:00 alarm by a few minutes, quickly loaded my car and was on the road by 05:30. My first stop was just around the corner to pick up my sister, Cathie, and from there we continued on to North Haven.

We were on Arriba and underway at 06:15, bound for Boxing Bay, Kangaroo Island (KI). Our goal this trip is to circumnavigate the island under sailpower alone. I circumnavigated the island 5 years ago, but that time we motor sailed at times. For additional thrills, this time we will need to dodge a storm. BTW, Kangaroo Island is Australia's 3rd largest island with 500 km of coastline.

We got off to an excellent start and sailed to Boxing Bay in record time, covering the 65.6 nautical miles (122km) in just 8 hours 53 minutes, so averaging 7.5 knots. We benefited from an ebb tide for the first few hours, and 1.5m following seas to push us along. It has been so long, at least 2 years, since I sailed from North Haven to KI, as all of my recent trips have been from the much closer mainland departure point Wirrina Cove. I’d forgotten what a long day it is.

Ferris (my border collie) was wearing his doggie flotation device and settled in under the cockpit table. He got seasick early on, but after that seemed reasonably content. 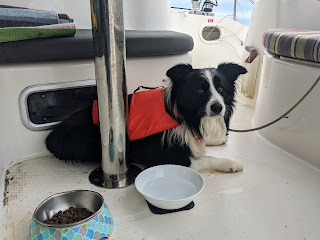 When we arrived at Boxing Bay the wind was still blowing 18 knots from the north, so the (north-facing) anchorage was untenable. Optimistically, we tried to hook onto my mooring, but gave up after 3 attempts. Even if we’d been successful, it would have been a very bouncy ride, with 1.5m seas rolling into the bay. We therefore motored 30 minutes around to the lee of Marsden Point which is partially protected from northerlies (and excellent in NW winds). According to the forecast by “late afternoon” the wind was supposed to have shifted to the west, but as of 21:00 that change has yet to happen. The Marsden Point anchorage is still a little sloppy on account of the wrap-around swell, but infinitely better than Boxing Bay. Hopefully the wind will indeed shift to the west during the night and things will settle down.

Once at anchor, I lowered Ferris into the water off Arriba’s stern for some swimming exercise, since he’s been cooped up all day. With a bit of encouragement he will swim around in circles. Unlike the human crew, he earned himself a hot shower for his efforts and a rub down by the big dog, which he loves.

Dinner was spaghetti leftovers from the night before; quick and filling. I managed to catch a good-size squid which I’ll save for a future meal. Cathie crashed at 8pm, leaving me alone with my thoughts and my writing.

Reviewing the weather forecasts suggests an anti-clockwise circumnavigation is the way to go. Tomorrow (Wednesday) we’ll return to Boxing Bay, hook onto my mooring, and have a rest day. Yes, I know we’ve hardly begun, but I’ve lined up some meetings ashore. The day after tomorrow (Thursday) we’ll take advantage of the forecast southerly to sail to the western side of the island, to say Scott Cove or Harveys Return. We may stay there all day on Friday, to perhaps go ashore and do some hiking if it is not too rainy, or just fish otherwise. By Saturday conditions on the south coast are forecast to subside to 15-20 knot southwesterlies and friendlier seas. That will make for a dream run east into Vivonne Bay in time for Saturday night. Then on Sunday we’ll continue onto Cape Willoughby, round the eastern side of the island, and spend the evening in Antechamber Bay. Monday would see us complete our circumnavigation by returning to Boxing Bay.