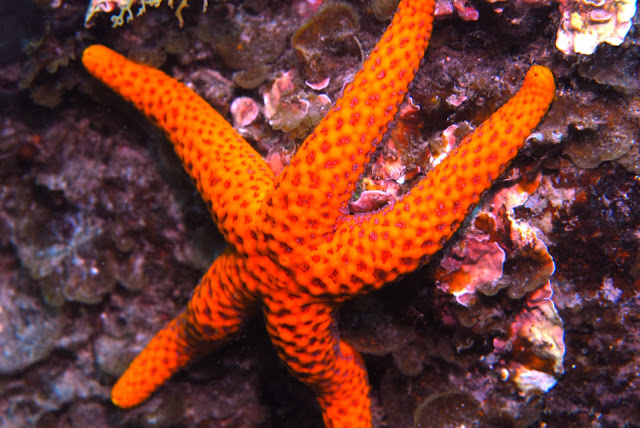 Kangaroo Island is not just a sailing paradise, it is an underwater paradise. Its coastal waters are part of the Great Southern Reef, spanning Australia's temperate waters. These waters rival the Great Barrier Reef for biological diversity and 95% of species are found nowhere else. Best of all, Kangaroo Island's marine environment remains largely pristine. The above photo is the "many-spotted star" (Austrofromia polypora), shot by crew member Dave Muirhead.

While I've snorkelled and hookah-dived on KI many times, till now I've never scuba dived there. Sadly, the island's only dive shop closed down a few years ago. Diving gear can of course be brought in from the mainland, but refilling tanks requires a visit to a service station and waiting 20 minutes per tank. Not very convenient! The solution is to be part of a group which has a dive compressor. In my case, AusOcean's recent expedition to Kangaroo Island on Arriba provided that opportunity.


On Sunday December 16th, nine of us sailed from Wirrina Cove for Boxing Bay, ~32 nautical miles away. With a smaller group we could easily have lived aboard Arriba. However with nine people including dive gear for five, we instead opted to camp ashore. There we were joined by two of my family who provided support. Over the next 5 days we dived at 10 locations between Smith Bay and North Cape, which you can read about on the AusOcean blog.  Here I'll focus on the sailing aspect of the trip.

The requirements for a good diving location and a good anchorage are generally the same, namely protected or semi-protected waters and offshore winds, i.e., a windward shore. For the north coast of KI, this naturally means southerly winds. We were blessed with S, SE or SW winds for our entire trip so we had plenty of good locations. Boxing Bay is a superb anchorage in such conditions and was our home base for the entire trip. Had the wind swung to the north, we would have relocated to the nearby Bay of Shoals, but that proved unnecessary.

Many of the more interesting dive locations were over or near rocky reefs, which meant anchoring on rocky bottoms. Such anchorages are rather dicey at the best of times, so it is prudent to take extra care anchoring. As a result, I found myself staying on board more than I would have liked. The skipper's primary responsibility is to ensure the safety of their vessel and crew after all. This was reinforced when we drifted about 50m at one location, before we came to a halt.

Two days we dived around Boxing Bay and three days we dived at Smith Bay, 9 nautical miles to the west. The latter is a pleasant 90-minute sail each way, and we were frequently accompanied by dolphins. One of our crew, Jack, brought his drone and took some stunning aerial photos. Here are some of my favourites. 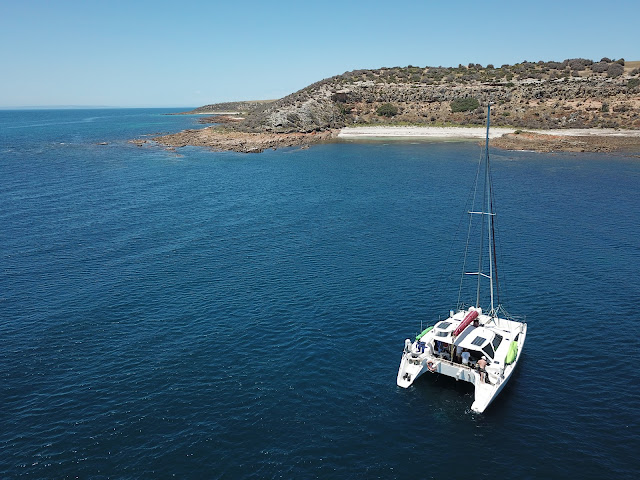 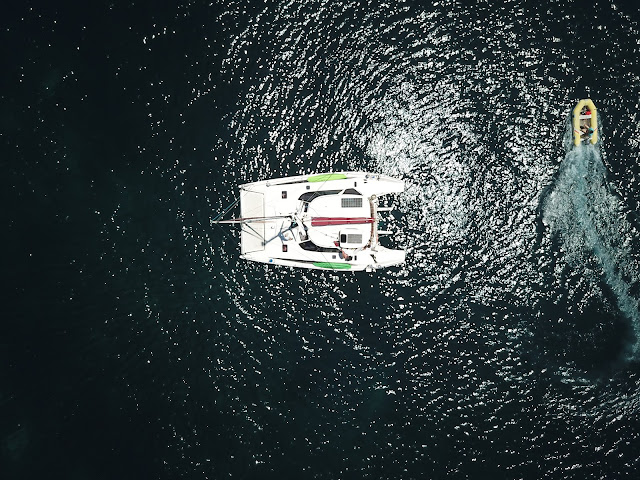 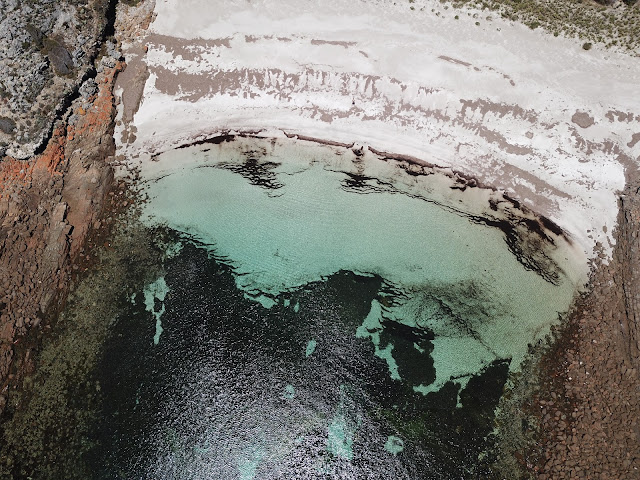 On our sixth and final day we reluctantly packed up camp and set sail for Wirrina, covering 37 nautical miles under sail in 5 hours 43 minutes (averaging 6.4 knots).