Cruise: Sharks up close at the Neptune Islands 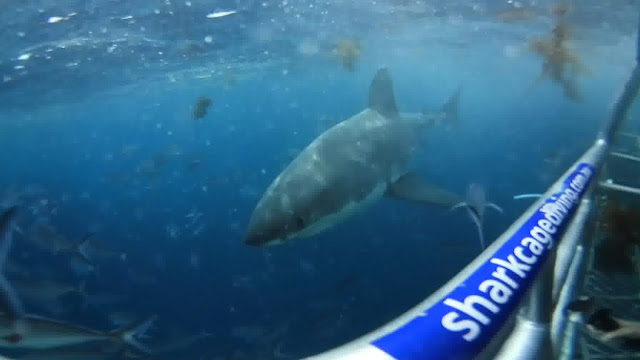 Last week I came to face to face for the first time with a great white shark in the water. It was far from being a scary experience though as, along with five other people, I was safely ensconced within a sturdy metal cage. In fact, I was struck by how little these animals seemed to care about us humans as they glided past serenely.

Our shark adventure started 3 days earlier as an overnight sailing trip. On Sunday 16th April at 12:50, with crew, Diego and Helena, we set sail for Port Lincoln from Wirrina Cove. We enjoyed a gentle 12 knot SE breeze enabling us to sail under main and gennaker at 7.2 knots. By midnight the wind had swung to E and we tacked for Thistle Island.

Around sunrise (06:30) the wind dropped off to 7 knots, so the headsail was furled and we motor sailed up the east coast of Thistle Island. Unfortunately the easterly wind meant both anchorages on that side of Thistle Island would be untenable. We therefore passed Waterhouse Bay and Whalers Bay and continued around to the north coast of the Island.

There is an anchorage on the NW coast of the island called Snug Cove. The name is a misnomer as due to its shallowness the anchorage lies well outside the actual cove and it is not particularly snug, although it nevertheless provides shelter from NE thru S winds. Underwater rocks extend NW from Observatory Point for about ¾ a mile, so when approaching from the SE, as we did, it is necessary to clear these before turning back to the anchorage. As we prepared to anchor it became evident that the wind had swung around further and was now from the NE. We could have stayed there in a pinch, but after a night at sea I was determined to find a completely smooth anchorage. We therefore continued north, and promptly caught two large snook. At 09:20 Arriba was anchored just north Taylor Island and SW of Owens Islet in 2m of flat water.

We took the dinghy across to Owens Islet and noticed that a slow puncture had worsened to the point where one section would now deflate in just a couple of hours. The repair required immediate attention (below), but other than that we relaxed and snorkeled. (As before I used pond liner for the patch and Soudal Fixall Ultra for the glue, which bonds extremely well in only 90 minutes.) 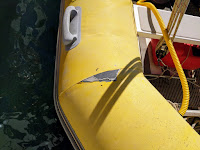 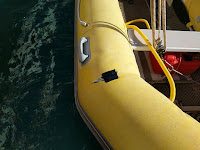 Late afternoon we moved to Memory Cove, a beautiful tree-lined cove within a pristine wilderness protection area (part of Port Lincoln National Park). It offers shelter from the SE thru S to NW, which suited us fine as by now the wind had swung full circle to the SE. Surprisingly, given it was the Easter long weekend, we were the only vessel in the cove.
At 08:05 the following morning (18th April) we weighed anchor and motored towards Port Lincoln in calm conditions. Two hours later we stopped for a break at the beach just north of Maclaren Point. This east-west oriented peninsula 5 miles south of Cape Donington provides shelter from all westerly winds.
After snorkeling for an hour or so we continued on our way and were berthed at the Port Lincoln Marina at 13:10. We'd traveled 162.7 nautical miles since leaving Wirrina.

Our shark-cage diving adventure, which was our reward for supporting this research campaign, started at 07:00 the next day on "Calypso Star". The latter was conveniently berthed a short distance from Arriba. We felt pretty special to be walking from one boat to the other, without even leaving the marina. We were the first "boat in" customers they could recall.

The "Calypso Star" motored at 13 knots for the North Neptune Islands, 37 miles away. These barren islands would be of very little interest if not for the fact that they are a major aggregation point for great white sharks.
We were divided into 5 groups and took it in turns getting in the cage for 40-minute sessions. Like most shark cage operators, Calypso rely on berleying in order to lure sharks in close. The berleying is performed skillfully though with the intention of not allowing the sharks to actually grab the lure (which was tuna remains). Water clarity was generally very good, but the cage was very bouncy and between the shaking, stirring and exhaled bubbles, the water was extremely aerated. Diving experience is not required though, and young and old alike participated.

The glimpses of great whites were tantalizingly brief. A shark would briefly glide past, then would not be observed again for several minutes. They are of course wild animals, so this is the nature of the experience. Even with the fleeting gimpses it was exciting to be able to get up close to these remarkable creatures. Below is 6 minutes of 360-degree (unedited) footage taken with a Nikon Key Mission 360. Shark encounters are at 1:15, 2:20, 5:21 into the video. (The top photo is extracted from one of the video frames, as I was shooting video only.)

We were also joined by Flinders University marine biologist and shark researcher, Charlie Huveneers. While researchers know that sharks travel very large distances, much about their behavior is still unknown. Charlie, like researchers around the world, was tagging sharks. He has a particular interest in understanding the impact of the shark cage diving industry on shark behavior and residency, and the operators have the good foresight to allow him to come along.

Charlie explained that shark tags are 69 kHz sonar transponders. GPS transponders would require too much power and would only work on the surface. Signals are received and logged by underwater receivers at fixed locations around the coast, and data is either collected for analysis at regular intervals or transmitted via satellite.
The 3-hour journey back to Port Lincoln passed quickly as everyone revelled in their shark stories.