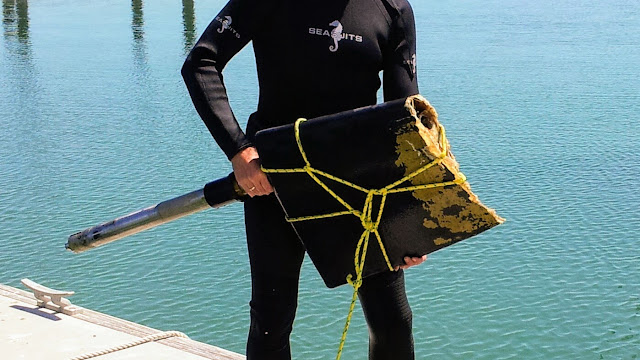 I need to preface this post with the admission that I don’t profess to know how all rudders fail. I know how some rudders fail, having managed to break one. I welcome contributions from more knowledgeable readers.

Rudder failures account for many boats being abandoned at sea, and yet relatively little is written about how rudders fail. I therefore decided to research the subject.

This Sail Magazine article has a good explanation of rudder construction and how the various components fail. In summary, production rudders are generally composed of (1) a metal tube, the so-called “stock”, (2) a metal framework which is welded to the stock and (3) fiberglass covering the framework. To list just a few failure modes, stocks can bend, framework welds can fail causing frames to separate from the stock, and fiberglass can delaminate. Design decisions and poor maintenance exacerbate failures. For example, exposed spade rudders are by design more vulnerable to an impact. As for maintenance, skippers who ignore water leaking from a rudder while hauled out, do so at their own peril. I’m interested in understanding how otherwise dependable rudders fail though.

First, it’s useful to understand the routine forces applied to a rudder. The following table summarizes approximate lift forces produced at various rudder angles, using Bernoulli’s lift equation L = ½ ∙ ρ ∙ V2 ∙ A ∙ Cl where ρ is the density of water, V is the velocity, A is the area of the rudder and Cl is the lift coefficient, 2 ∙ π ∙ α , in which α is the angle of attack (expressed in radians). The table also shows how much of the dynamic force is lateral (at right angles) to the rudder (i.e., the sine of the angle expressed as a percentage).


Before delving further it is important to understand one of the fundamentals of rudder design, which is that the rotation should never exceed about 35°. This is the so-called “critical angle” for a foil flowing through water. (For airfoils, it is typically less than 20°). Beyond this angle eddies start to form and a rudder stalls and starts to act like a brake. This is the reason why many boats have rudder stops positioned at +/- 35°.

Beyond the critical angle a rudder generates more drag than lift, which is naturally greatest in the broadside position. This is the dynamic pressure exerted across its full area, given by the formula Q = ½ ∙ ρ ∙ V2 . For a vessel traveling at 6 knots (~ 3 m/s) that’s ½ ∙ 1000 ∙ 32 or 4.5kPa of pressure, or 4.5kN for a 1m2 rudder. For the same vessel moving at 12 knots (~ 6 m/s) with its rudder broadside, that force rises to 18kN. That’s about the same force as the maximum lift produced by a rudder at 6 knots, so well within its safety factor. A vessel moving forward through the water at typical speeds is therefore unlikely to break its rudder due to dynamic pressure forces.

The deceleration force is another matter. This is given by Newton’s equation F = m ∙ a or F = m ∙ 𝛅V/𝛅t. For example a 10 kg rudder that decelerates from 6m/s to a complete halt in 1 second, generates a force of 60N. Puny, you say! Yes, except we actually have to consider the mass of the vessel. A 10 (metric) ton vessel decelerating from 12 to 0 knots (speed over water) in 1 second generates 1000 times more force, i.e., a massive 60 kN (13,500 lbf). A rudder which is the point of impact will bear the brunt of this force.

Rudders break simply because they are sometimes subjected to enormous forces that exceed their design rating (safety factor). Let’s go down the list.

This is mostly an issue for spade rudders and even then you need to be unlucky. Essentially your vessel’s keel manages to clear an underwater object but for some reason your rudder doesn’t. This is unlikely with skeg rudders or full rudders which are protected by the vessel’s keel.


Hitting an object going in reverse

Hitting an object going in reverse is more likely, and I have firsthand experience doing so. In my case Arriba drifted at anchor and ran aground in reverse. On a calm day, running aground onto a sandy beach might have done little more than to cause embarrassment - and scrape off some antifoul. Alas, it was a rough day and within just a few minutes the pounding waves caused the bottom half of the port rudder to snap off. That was actually a good thing. Rudders should be designed to be sacrificed to save the hull.

Tip: When motoring in reverse it is a good idea to ensure your rudder is locked in the parallel position and to proceed very cautiously.


Being hit by a following wave

Being hit by a following wave is a distinct possibility in a storm. Water is virtually incompressible and packs a punch upon impact.

The good news is that most ocean waves don’t travel fast enough to generate rudder-breaking forces. In deep water, the wave velocity is given by the formula V = √(g ∙ λ / 2π) where g is gravity and λ is the wavelength. A wave of length 10m (32’) travels at just under 4 m/s or 7.7 knots. Such a wave slamming into a stationary rudder is only equivalent in force to a vessel moving at 7.7 knots. Further, the vessel is unlikely to be stationary in the first place.

However large ocean waves are another matter. For a wavelength of 50m (164’) the wave speed is ~17 knots, and any associated breaking water is also moving at approximately that speed. Vessels can usually handle breaking waves if they break at a small angle to the stern; +/- 20° seems to be the conventional wisdom. Although suitably aligned vessels may avoid capsizing, the rudders are still subjected to violent forces. This is where drogues are helpful, as they not only align the vessel with respect to the following waves, but they slow it down. This allows a following wave to pass by without dropping the vessel into a trough and exposing it to breaking waves.

This is a variation on the above. A vessel can potentially slide sternward into a following wave. While this seems implausible, it is possible for the towline between a vessel’s bow and a sea anchor (off the bow) to go slack (described in this 1986 US Coast Guard report). If this happens the vessel can move backwards relative to the sea anchor or, worse, the vessel could turn broadside to a following wave.

I’ll finish with this account of the biggest wave ever reported, which had a length 342 m and a height of 34 m (112’) peak to trough. What is interesting is that the USS Ramapo survived because its length was about half the wavelength, so the vessel nestled nicely between crests. In contrast, such long waves would severely stress today’s largest supertankers which are more than 400m long.