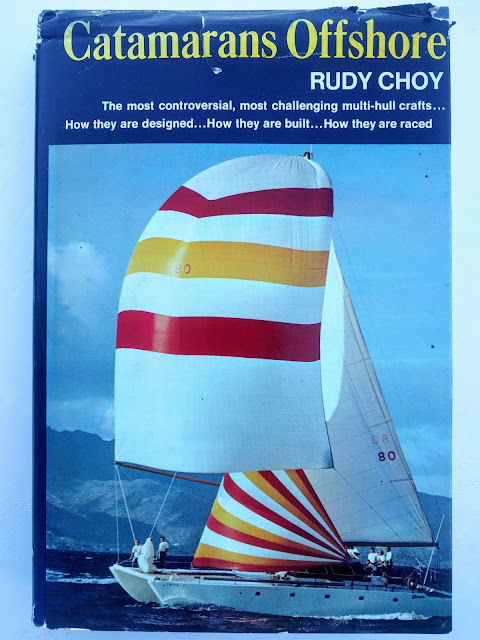 I recently traveled to New Zealand where I enjoyed 6 lovely days on the North Island. That is way too short a trip, but I did at least get to explore a new part of the country namely “Northland,” several hours north of Auckland. One of the joys of renting a beach house is discovering old books that nice owners leave out for their guests. This time I was delighted to find two books about the modern history of multihulls, namely “Catamarans Offshore” by Rudy Choy and “The International Book of Catamarans and Trimarans” by Edward Cotter.

I say modern history because vessels with multiple hulls have a long and glorious history that predates the modern age. Ancient Polynesians traversed thousands of miles of wild Pacific oceans in sturdy catamarans, long before Europeans ventured into coastal waters in their monohulls. New Zealand was the last and largest landmass that the Polynesians discovered and their descendants are the Maori. One of the places we visited was Waitangi where the 1840 treaty between the English and the Maori was signed. The Waitangi Treaty Grounds are located on the shores of the beautiful Bay of Islands and the nautical aspect of Maori culture is evident everywhere. This beauty of a double-hulled canoe was on the beach, just screaming to be taken out for paddle.


Back at the beach house though, after a hard morning of snorkeling, I skimmed through the “International Book” which was a compilation of articles about various aspects of catamaran and trimaran technology and sailing technique. Published in 1967, from the vantage of half a century later, most of the stories seem rather quaint. For example, back then there was considerable debate about whether racing multihulls could fly spinnakers, due to the small apparent wind angles at high boat speeds. Obviously they can, and it was Australian multihull sailors who apparently paved the way.

It was “Catamarans Offshore” that grabbed my attention though, and demanded I read it cover to cover. Published in 1970, it describes the formative years when modern-day offshore catamarans were invented, or should I say re-invented. The book is a lively blend of sailing history, technology and nautical yarns. The modern area of catamarans arguably starts in 1947 with the beach cat "Manukai" built by Woody Brown, Alfred Kumalae and Choy. The book however starts with building of "Waikiki Surf" in 1956, a coastal cruising cat that graced Hawaiian waters. It was however the offshore cruisers that followed, such as "Aikane" launched in 1957 and "World Cat" in 1965 that transformed nautical history.

The yachting establishment was challenged, indeed threatened, by these catamarans which promptly won every offshore race on offer. The Trans Pacific Yacht (TPY) Race from California to Hawaii and the Newport to Ensanada (NOSA) fastest times quickly fell to cats. Enlightened race organizers rightly introduced multihull divisions, but unfortunately, then, as now, some races simply banned multihulls.

For example, the major offshore race in South Australia (from Adelaide to Port Lincoln) only permitted multihulls to compete for the first time in 2014 (my story). Unfortunately multis were banned the following year and remain so, despite zero safety incidents involving multihulls. Imagine if snowboarding (“monoplank skiing”) had gained popularity before skiing (“multiplank skiing”) and the latter was banned from ski resorts - just because you can go downhill faster on skis? In reality, it was snowboarding that was often banned in the early days of the sport - and still is in some places*.

The higher speeds of cats and, in particular, the large forces to which they are subjected, especially when reaching, forced Choy and his partners Warren Seaman and Kumalae at C/S/K to learn many design and construction lessons in a small number of years. In his own words, in the early days it was more art than science. By the time the appropriately-named "World Cat" had circumnavigated the globe, the first modern catamaran to do so, cats had proven that they were tough as well as fast.

“Catamarans Offshore” is a classic that will appeal not just to not catamaran sailors, but to anyone with a keen interest in nautical history.