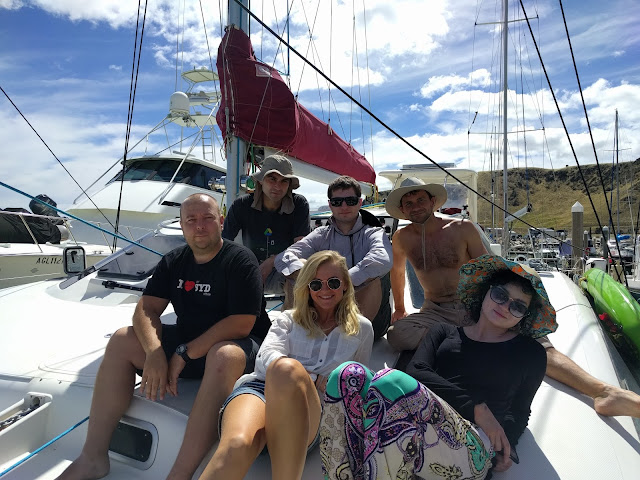 For the fifth year in a row I’ve auctioned off a 4-day sailing trip on Arriba with all of the proceeds going to charity. My crew this year were an all Russian-speaking crew of Sydney-based "Googlers" (as Google employees call themselves). From left to right: (front) Evgeny, Yuliya, Rushana and (rear) Anatoli, Artem, and Sergei.

As in previous years, we sailed to Kangaroo Island (KI) but this time we extended our range by sailing through the night. At 11:40 on Thursday February 2nd, we departed Wirrina Cove for Boxing Bay, arriving exactly 5 hours later. Boxing Bay is only 32 nautical miles from Wirrina and, as the most northerly anchorage on KI's north coast, is a natural place to stop over. We relaxed there for several hours and went ashore for a walk before having burgers for dinner. My colleagues surprised me with a lovely cake in honor of my 10th year anniversary at Google.


We resumed our westward journey at 20:23, passing the beautiful Emu Bay cliffs just as the sun set. Our destination was flexible, our plan being to simply sail sufficiently west so as to reach land after sunrise. We sailed as far west as longitude 136°38.435'E and 12 nautical miles offshore, before tacking coastwards in a SE direction. At 07:20 we arrived at Kangaroo Beach, having sailed 61 nautical files and 11 hours from Boxing Bay (averaging 5.5 knots).

Everyone was ready for breakfast and a swim. We spotted dolphins in the cove and Sergei managed to swim up close and take underwater photos.
Two hours later we weighed anchor and set sail for Western River Cove, a leisurely 8 nautical miles east. Everyone immediately went for a swim. Some of us swam to the beach while others went snorkeling. Later we broke out kayaks. I took some 360° video while kayaking with my new Nikon Key Mission 360 (post to follow).

Over lunch it was decided to stay put for the night, which suited the skipper just fine, as I'd been awake since 04:00. That evening we enjoyed a bonfire on the beach, where we lingered until 11 pm. There were quite a few "dead soldiers."


The next day required an early (06:40) start as we needed to regain some of that easterly longitude we'd yielded two nights earlier. Everyone except Anatoli was asleep when I weighed anchor. There was no wind so we motored across calm seas and sunny skies, frequently accompanied by dolphins.
We anchored at the beautiful Mares Tail cove at 09:45 in 6m of water. After a big bbq breakfast Yuliya and I went kayaking, while others swam and snorkeled. We spotted a seal, a sea eagle and 2 sting rays - and of course lots of fish. That said, it is the stunning cliffs that I most love about Mares Tail.
At 12:10 we resumed our easterly course. The wind slowly picked up and was at first helpful but turned into a 15 knot headwind and then light rain as we crossed Western Cove. My crew did not mind as they were engrossed playing charades. By 17:20 we were anchored at Ballast Head in overcast, drizzly weather. Fortunately it stopped raining later that evening so Artem was able to resume his sleeping position in the cockpit.

The following morning Anatoli and I swam to shore and Rushana and Artem joined us by kayaking. We then motored into American River a mere 4 nautical miles away, tying up to the dock at 09:45. Normally I would anchor rather than dock, but I only planned to be there for an hour or so. The Deck Cafe opened at 10 am and we all enjoyed our first espresso coffee in 3 days.


While my crew wondered off to The Oyster Shop to eat oysters, I went to the Independence Boathouse and caught up with friends working on Schooner Independence, where good progress has been made framing the hull.

At 11:45 we departed for American Beach on the other side of Eastern Cove, with Rushana, Artem and Evgeny all taking turns at the helm. There we enjoyed our last swim of the trip.

Alas, it was a short stop as we needed to get going if we were to cross Backstairs Passage at slack tide. But first we had to drop off Sergei and Artem at Penneshaw, as they were planning on spending another week on the Island. Lucky them!
As planned, we departed Penneshaw at 14:05 about 45 minutes before low tide. Despite the storm clouds on the horizon, our crossing of Backstairs Passage was smooth and we reached Wirrina Cove at 17:25 pm. The foul weather hit us later as we were driving up the coast to Adelaide Airport.

We had sailed 188 nautical miles, traveling further and visiting more places than any of my previous 4-day trips to KI.  My only regret is not learning a bit more Russian. To my crew, spasibo for being a great crew!