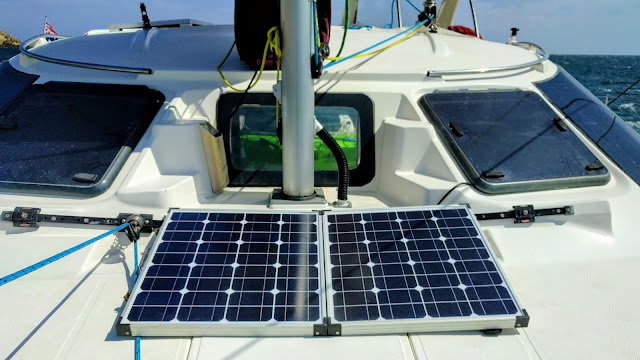 On hot summer days it’s hard to beat being on the water. This is especially true where I live, on the southern edge of a dry continent, where hot northerly winds crossing thousands of miles of desert pack serious heat. At least once a year we can count on several days in a row of scorching 40°C (102°F) temperatures. We're going through such a heat wave right now. 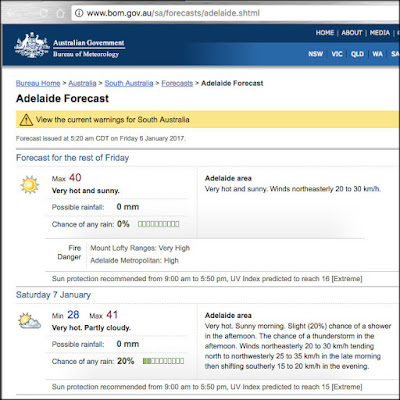 When I was a boy we sometimes used to escape the heat by sleeping on the beach. We’d settle in for the night as close to the water’s edge as we dared, hopefully avoiding being inundated by a rising tide. That was cool, but sleeping on the water is even better, especially when you’re suspended on the trampoline of a catamaran, barely 1m above. Who needs air conditioning when you have natural evaporative cooling?

Being on a boat in such hot weather also demands an icy cold refrigerator, which is most likely your biggest power hog at anchor (excluding air conditioning). For example, Arriba’s boat fridge and freezer combined, draw 5 A of current whenever the compressors are running. On those super hot days they run frequently, about ¾ of the time. That means they draw 90 Ah of energy every 24 hours (5 A ✖ ¾ ✖ 24 hours). In comparison, everything else on board combined (pumps, lights, electronics, phone chargers, etc.) averages about 30 Ah, for a total of 120 Ah. Arriba burns through about 80 Ah between 18:00 and 10:00. Of that, ~20 Ah is for the anchor light, which I've yet to upgrade to an LED.

Arriba has 400 Ah of house batteries (plus a dedicated 100 Ah radio battery) which are replenished with 200 W of solar panels. In theory that 200 W is sufficient to supply 16.67 A at 12 V, but the output is reduced both due to clouds and the fact that the panels are fixed in position, i.e., not always aimed at the sun, and sometimes partially shaded. On a typical sunny day they produce about 12 A on average, which over the 10 prime solar hours of daylight (between 10:00 and 18:00) generate 120 Ah (12 A ✖ 10 hours).

So when the sun is shining brightly, Arriba produces just enough energy to meet demand but it only takes a few persistent clouds to upset the balance. Sure enough, I’ve noticed that when we're at anchor for a couple of cloudy days, Arriba's batteries never fully recharge to 100%. For example, on the first day they might bounce back to 95%, and on the second day 90%, etc. Like a national economy, you can only run a deficient for so long! So my rule is to always end each day with fully charged batteries.

Running an alternator for 20 minutes can replenish 20 Ah (i.e., 60 A ✖ ⅓ hour), but running lightly-loaded diesel engines at anchor is smelly, noisy and inefficient - and so for self-respecting sailors that must be considered a last resort. Instead I decided to supplement my permanent photovoltaics with a portable 80W panel. Solar panels have come down dramatically in price and mine came with a built-in charge regulator, an assortment of Andersen plugs, a 10m extension cord and a nice carry bag. I now plug it in whenever I’m at anchor at the same spot and need an energy top-up (top photo). The advantage of the portable panel is that I only need to bring it out on deck when needed; at other times it folds in half and stores very compactly.

I encourage you too to do a power inventory. First, make sure you’re not on shore power and turn off your battery charger. Next turn off your PV regulator. Now turn off all circuits at your circuit breaker panel. Check your power monitor shows a draw of 0 A. Now turn on your breakers one at a time, turn on lights, devices, etc., and measure the current draw.

Last summer Arriba's freezer started running continuously without getting cold due to insufficient refrigerant. This is something you need to nip in the bud, since any continuous electrical load is a sure way to drain your house batteries and damage them if they are allowed to completely discharge.

Tip: Keep your fridge and freezer compressors free of dust and unobstructed.