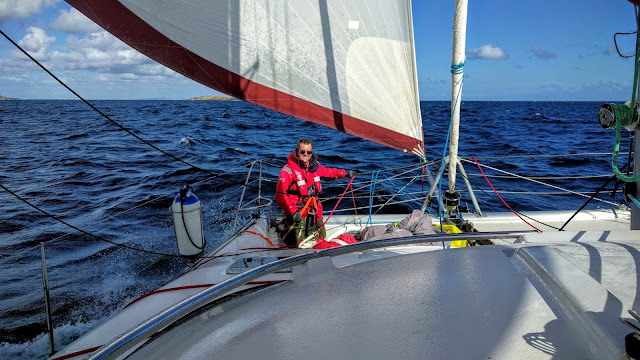 Some folks dismiss cruising catamarans as “floating caravans”, but I'm guessing they've probably never sailed one. Here’s what I like about sailing cats:

Compared to a cruising monohull of the same length, cruising catamarans are typically 20% to 30% faster due to their lightness and slim hulls. Further, a multihull tends to accelerate when a gust hits, whereas a monohull tends to heel over to shed power.

NB: In technical terms, cats have a higher power-to-weight ratio.

Heeling over can be fun, for a little while, but it gets tiresome when you’re subjected to unnatural angles for too long.

NB: Cats still bounce around, but the movements are typically small and swift vs. large and protracted.

Cat with their dual hulls and wide beams are akin to 4WD vehicles with their wide wheel base. In contrast, monohulls are more like tippy motorbikes. The former are directionally stable, i.e., tend to track very straight, whereas the latter require constant steering to maintain a heading. Directional stability also reduces the burden on the helmsperson, and makes the job of the autopilot easier.

NB: Monohulls can of course sail straight too, but generally it involves more work at the helm.

The large foredecks on cats are not just neat places for crew to sun themselves and watch dolphins. With lots of room to move around, raising and lowering headsails, especially spinnakers, is easier and safer (top photo). Similarly, the huge cockpits make it easier for multiple crew to work without interfering with each other.

Several design features of cruising cats will keep you drier. The bridgedeck cockpits are higher and usually more protected, and they also drain very quickly via the open transoms. In foul weather you can retreat inside and steer by autopilot without sacrificing visibility.

NB: Monohulls with pilot houses keep you dry too, but generally with a greater loss of visibility.

Shallow-drafted cats can go places where keelboats can’t. As a bonus, you get to anchor closer to shore, which at many spots is the difference between a completely calm anchorage and a bumpier spot further out.

As an added “benefit”, if you run aground you’re still level. I should say when you run aground, as in the words of marine historian Don Bamford: "Only two sailors, in my experience, never ran aground. One never left port and the other was an atrocious liar."

Cat are really fun to sail on a run with waves from behind, even in strong winds (22-27 knots). Surfing is fun, not terrifying. Their forward buoyancy mitigates the risk of submarining the bow, and their directional stability greatly reduces the chance of broaching.

NB: In stronger (i.e., near gale plus) conditions, consider deploying a drogue to slow down.

Note that I’ve been comparing cruising catamarans with their cruising monohull counterparts. I acknowledge that monos have their advantages too. They are generally easier to tack, point better and cheaper to purchase or charter.

Finally, I should mention that there are benefits to cats beyond being fun to sail, such as their manoeuvrability under power with twin propellers, their stability at anchor, and of course their "caravan-like" spaciousness. Another blog post perhaps.

PS A sailor’s point is view is always going to be shaped by their vessel and the waters they sail. YMMV.
catamaran safety