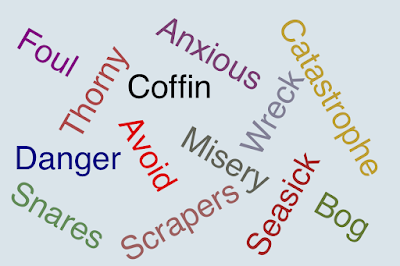 Clearly Captain Matthew Flinders endured a worrisome time during his 1802 circumnavigation of Australia. Within rapid succession he named Anxious Bay (11th Feb), Coffin Bay (16th Feb), Avoid Bay (17th Feb), Cape Catastrophe and Thorny Passage (21st Feb). Cape Catastrophe was the site of the capsizing of one of their boats, which sadly resulted in the loss of 8 crew. Coffin Bay, on the other hand, has nothing to do with the deceased; it was so named after Admiral Sir Isaac Coffin. Danger Point was named earlier (7th December 1800) by Captain James Grant en route from England to Sydney, who incidentally is the inspiration for the character in Patrick O'Brian's novels. Wreck Beach was named after the shipwreck of the Ketch Mary Ellis on 5th April 1907. Many places do not have their origins recorded though.


Although most places with scary names should command respect from sailors, some are bum steers. For example, Avoid Bay is not to be avoided at all; it is nearby Point Avoid that one should avoid. And Seasick Bay is actually a place to escape from nausea-inducing seas, not the other way round.

Perhaps cruising would would be more popular in South Australia if Avoid Bay were renamed Embrace Bay or Misery Bay were instead Happy Bay? Or better yet, we could use indigenous names.

I bet you have some scary nautical names in your waters too. Please share them.