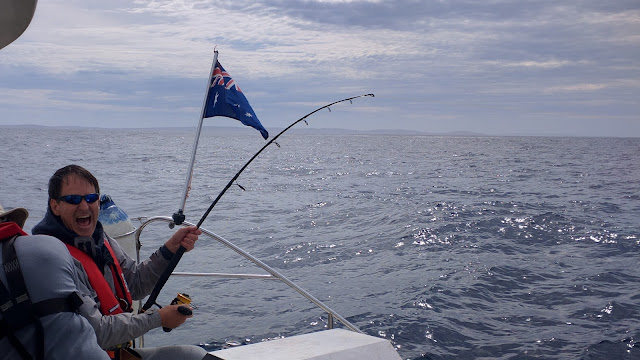 Most anglers who fish from a boat usually do so while at anchor or drifting slowly. This can be a very pleasant way to spend a day on the water, but most sailors would prefer to be actually sailing. Fortunately there is another way, which lets you have your cake and eat it, namely trolling.

NB: Trolling can also mean fishing by means of working a line up or down a stationary vessel, but here I’m referring to trailing a line behind a vessel while underway. Also, this is not to be confused with “trawling” which is towing a line with baited hooks attached at intervals, or towing a trawl net.

You may think that trolling is just an activity for slow-moving vessels, but that’s not necessarily the case. Certainly, if you’re trolling for trout on a lake, you’ll just be rambling along at a couple of knots. However trolling is also an excellent way to cover a large expanse of water at high speed. For example, if you’re trolling for tuna, go fast, as these agile predators can swim at 40 knots! I hooked this beauty of a bluefin tuna while sailing at 7 knots, which is barely fast enough to attract a tuna’s attention.
In one of life’s happy coincidences though, many fish species like chasing prey at slower, cruising speeds, i.e., around 5 to 6 knots. Another benefit of trolling is that it is well suited to the use of lures, rather than baited hooks, so it’s simpler and less messy. As with other forms of fishing though, you need to use the right lure for the fish you’re targeting. Lures come in an amazing range of sizes and colors. They’re also operate at different depths and swim with different actions.

Manufacturers provide selection guides, so I’ll just focus on some principles:
Depth is a whole topic of its own. For fish that feed on the surface, you’ll want some non-sinking lures, such the Kato Rattler (shown below). 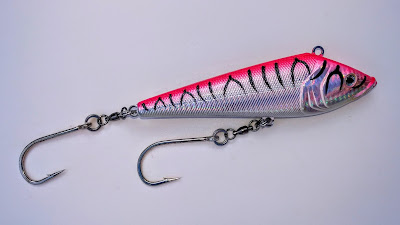 Another option is to use so-called “skirt” lures (shown below), which emulate squid, albeit some alien fluorescent variety, not seen in nature. Species such as tuna find them irresistible (at least sometimes). For fish that feed below the surface, you’re got a few options. The first approach is to use a paravane (shown below) to sink a regular lure that would otherwise bob on the surface. 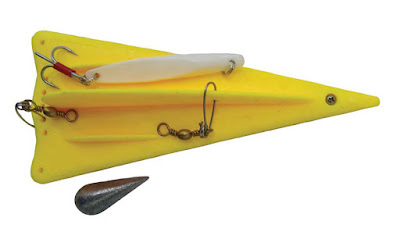 Here are some typical small lures for use with a paravane. 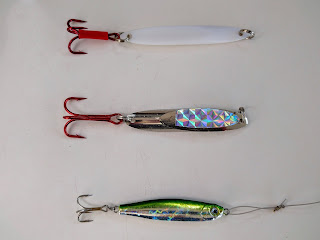 Trade-off:
Unless you use wire trace, sharp-toothed fish, such as barracuda and sharks, are going to occasionally bite through your line. There’s a trade-off between making the fishing line invisible vs. saving your lures with wire trace. With the cheap white plastic lures or shiny metal lures that work so well with Australian Snook or Salmon, I don’t bother with wire trace, and instead keep a bunch of spares on board. If your lure is precious to you though, and you're targeting sharp-toothed prey, wire trace may make sense - however expect fewer bites.

The second approach is to use a lure which is designed to dive to a given depth, typically specified on the packaging. Such lures often feature front “bibs” which act as mini hydrofoils forcing the lure underwater. Below is the Yo-Zuri Hydro Magnum, which can be pulled from 4 to 9 knots and dives 7 to 9 m (23 to 30 ft). It has a tight swimming action, that emulates a fast moving prey. The bibs need to be really tough; the best ones are made from the same polycarbonates used in bullet-proof glass. (Scratches courtesy of the tuna that have chomped on it.) 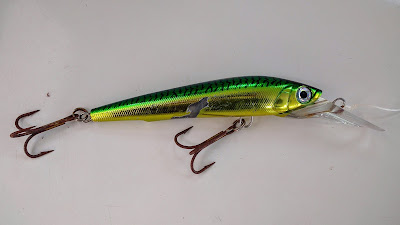 There are also so-called “bibless” lures, which are streamlined to allow to for trolling at high speeds. Below is the Halco Max 130 which can be trolled at 12 knots, and has a shimmering swimming action. One advantage of bibless lures is that they exert less drag and are considerably easier to retrieve than either paravane lure or bibbed lures. They cannot dive as deep however. 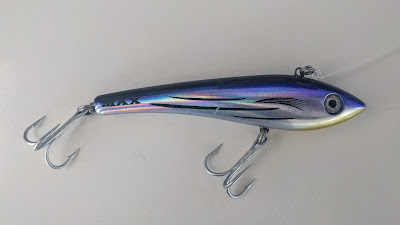 Trolling while sailing means you have less control over your boat speed than in a power boat. This means you need to choose the lure for your speed, not the other way round. It also means you're going to work harder to land your prey, since you don't have the option of killing your forward motion at the flick of a switch.

Here are my top trolling tips:
There may be some anglers out there who say there’s no sport in trolling, but in my experience there is still plenty of skill involved in choosing the right lure, setting them correctly, finding the right patch of water and, of course, landing your prey. And there's usually time for some regular fishing while anchored at the end of the day too.

PS Hooked Up Magazine has this excellent article on trolling for southern bluefin tuna.
fishing tech