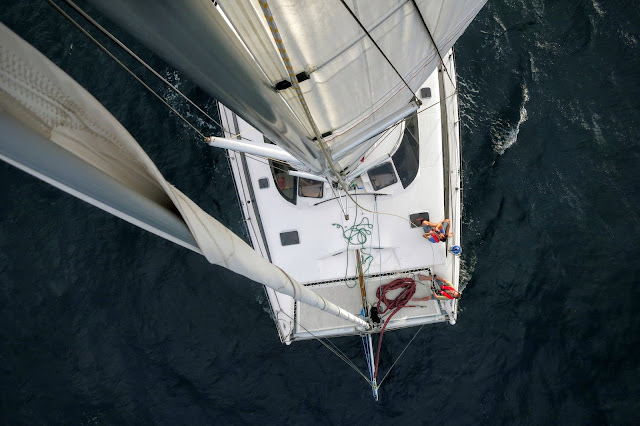 There are many first-world problems associated with owning a yacht, and last weekend I found myself confronted with two of them. (I apologize in advance to anyone who is still saving to purchase their first boat and has not yet been blessed with such "problems.")

Problem #1: The yacht is in the wrong place.
No, Arriba had not drifted away, although this has been known to occur in the past. Rather, Arriba was berthed at Wirrina Cove, where I'd left her after my last sailing trip to Kangaroo Island. In less than a week though Arriba needed to be at North Haven (Adelaide), 44 nautical miles away, for the 2016 King of the Gulf (KoG) Race.

Problem #2: The yacht cellar is empty.
My dear crew from the aforementioned KI sailing trip had completely drained Arriba of all alcoholic beverages. Either that, or Arriba's supply of wine had been sucked into some Bermuda Triangle of booze. For some inexplicable reason, the non-alcoholic beverages were untouched.

Fortunately, one of my crew, Nick, is the co-owner and winemaker at Top Note Wines in the Adelaide Hills. So on Sunday, with my other crew member, Byron, I drove to Top Note to visit their recently-opened cellar door. I hasten to add that normally I do not go wine tasting in the morning, nor before going sailing, but this was an emergency -  of sorts. One simply cannot purchase wine without first tasting. We sampled the Chardonnay, Pinot Noir, Merlot and Noble Rose, and all were delicious. 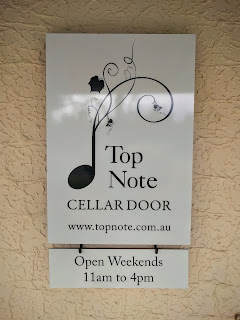 On the way down to Wirrina we made a delivery of Top Note wines to the Normanville Hotel, and it was 12:00 before we were finally underway.

The forecast was for W to SW 10 knots around sunrise, then tending S to SW 10 to 15 knots in the middle of the day, before reaching 15 to 20 knots in the late afternoon. The forecast swing to the S/SW did not occur however until late afternoon, and we mostly enjoyed 5 to 10 knots from the W then SW most of the way. Fortunately the flood tide kept us moving along at 5 knots during the frequent lulls. Perfect conditions for Arriba's big gennaker.

Happy hour was 17:00 and we enjoyed a taste of the Top Note Chardonnay (Byron and Nick below). 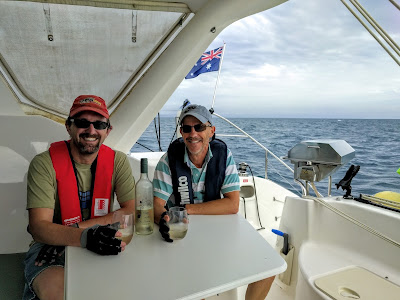 Around 18:30 the wind finally swung around to the South. At last it was time to fly the spinnaker. Till now we'd been enjoying Chardonnay sailing with the autopilot doing all the work, but now our adventures were about to begin.

We had not raised the spinnaker in some time and were quite rusty. First, we inadvertently rigged the spinnaker, which is an asymmetrical, on the wrong (port) tack. Before you relegate us to the noob basket, that had been our tack all day, but of course the wind had swung around. Fortunately we caught that mistake in the nick of time (although Bryon caught it, not Nick). Then, there was a knot in the dousing line, making it impossible to raise the sock. Finally, just as we thought we had everything sorted out and had almost raised the spinnaker, the halyard shackle released. The spinnaker came crashing down on us and the shackle went flying to the top of the mast. Oops!

We were now sailing along under mainsail alone, doing about 5 knots, and at this rate we'd get to North Haven well after dark. What to do? Redeploy the gennaker or send someone up the mast in the bosun's chair to retrieve the spinnaker halyard? Nick, the lightest of us, graciously offered to do the latter, and took the top photo in the process.

Finally, around 19:00 we raised the spinnaker. That's me in front of it. 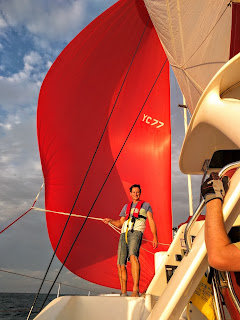 NB: Even after all that we didn't quite rig it right. I'm holding the dousing line which does not normally wrap around the sheet.

Our speed jumped to 8 to 10 knots and we quickly covered the remaining miles to North Haven. On the final approach we were treated to a glorious sunset. 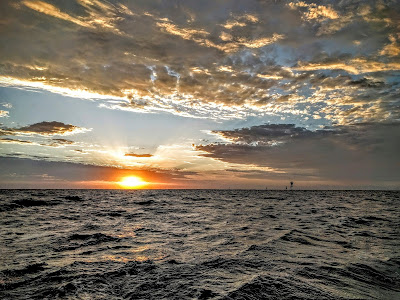 We arrived at North Haven at 20:30, 47 nautical miles and 8 ½ hours since leaving Wirrina, and with an (almost) fully replenished boat cellar. Mission accomplished!