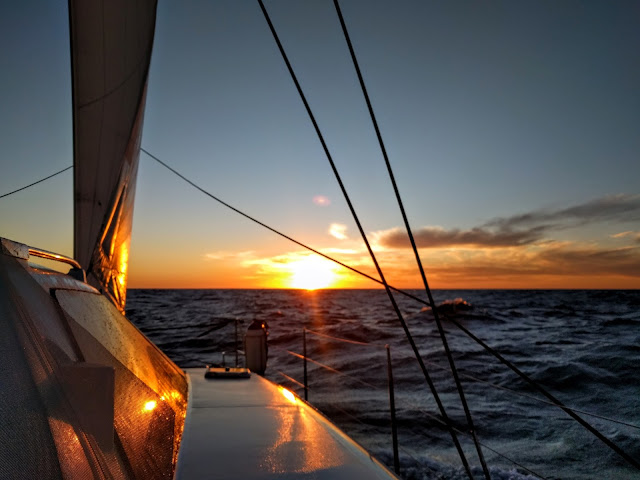 At 12:07 on Saturday February 20th, Arriba with 4 crew (Andrew, Liam, Byron and myself), set sail from North Haven for Coffin Bay on South Australia’s West Coast. The most direct route is 225 nautical miles, but we would go where the wind took us over the next 7 days. Our plan was to sail through the night as far west as we could, with the aim of being anchored the following (Sunday) afternoon. The forecast SE winds would be ideal.

Under light winds we motor sailed down the Adelaide metro coastline as far south as Grange before picking up a 15 knot SE wind. Turning out to sea, we now set our bearing for the SE corner of Yorke Peninsula, to a waypoint east of Marion Reef (35°9.3'S 137°49.73'E). Late afternoon we had a "situation" when the gennaker sheet suddenly came off the winch, backwinding the sail and punching a hole in it. Oops! Down came the gennaker and up went the jib. We would later patch the gennaker using the sail repair tape I keep on board for such emergencies.

We passed Marion Reef at 18:45 and the wind picked up nicely to 20~22 knots. At 00:55 we passed south of Althorpe Island. At 04:30 we jibed north to avoid some fishing boats and I took over from Byron and Liam. We were now about half way across Spencer Gulf and we faced a choice. Continue on this course towards Thistle Island or Memory Cove, or jibe again and keep well to the south? We chose the latter, partly because the wind was so good that we wanted to make the most of it, and partly to avoid the lobster pots that abound in Southern Spencer Gulf waters. We jibed back onto our original course.

A half hour later I decided to turn downwind further to detour via the South Neptune Islands. After all, one does not sail through these southern waters every day and I was curious to see these remote islands. The Neptunes are a conservation park famous for seals and great white sharks, and is the home of shark cage diving in South Australia. They consist of two island groups, North and South, the latter 22 nautical miles offshore. I took Arriba in close to the northern islet of the South group then down the western side, just as the sun rose.

Captain Matthew Flinders named the Islands after Neptune, Roman god of the sea. Their rugged coastlines would have made the islands appear inaccessible, although it is possible to land in places on the more sheltered northern coasts in fine conditions. A lighthouse was erected on the southern islet of South Neptune in 1901. It not automated until 1990 and was the last lighthouse in South Australia to be de-manned. Even with the lighthouse there have been shipwrecks. On 14 June 1946 the cutter Venus was wrecked on North Neptune Island and on 25 January 1959 the Yandra ran aground in thick fog on South Neptune Island.

I then bore away for Cape Carnot. Later that morning, as we approached Liguanea Island, the wind started to swing behind so the crew went forward to prepare the spinnaker. Suddenly, with me at the helm and everyone else up front, the fishing rod reel starting spinning furiously. I let the autopilot take over and I grabbed the rod. For the next 30 minutes I struggled to pull in a whopper of a southern bluefin tuna, a full 1m (39”) long. All the while Arriba continued along at 7 knots, as unlike a motor boat we did not have the option of coming to a halt by simply turning off the engines! 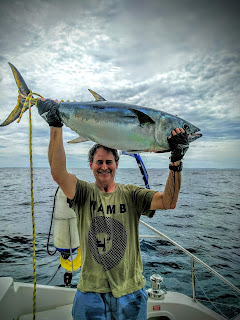 After pulling the tuna on board we sailed between Liguanea Island and Cape Carnot. We then raised the spinnaker and sailed in a NW direction towards Perforated Island. 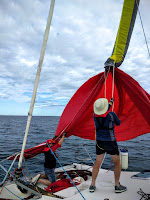 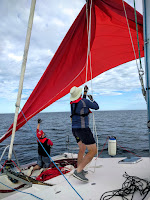 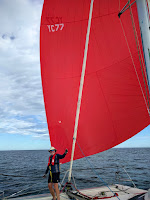 Cruising note:
Avoid Bay is a popular anchorage on the route between Port Lincoln and Coffin Bay. The name derives from the nearby Point Avoid which is surrounded by rocks. The bay itself is a safe place to anchor, providing shelter from winds N thru E to S. When coming from the east, the safest access is by sailing around the western side of Price Island (34°42.4S 135°17.3'E), although the inside (eastern side) is possible by hugging the shore of the island.

You only get one guess what we had for dinner that night! 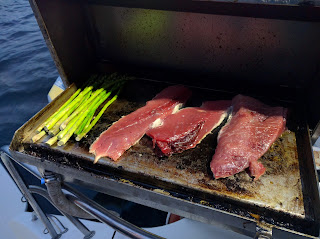 We were now within an easy sail of Coffin Bay, so the next morning we treated ourselves to a leisurely 09:00 start. After passing Whidbey Point (34°35.29'S 135°6.56'E), the SW point of the Coffin Bay Peninsula, we jibed north. We were now on the western side of the Coffin Bay and in the Great Australian Bight.

At 12:40 we stopped for lunch and a swim at Boarding House Bay (34°32.48'S 135°7.79'E), without a hint of a boarding house or any other structure for that matter. This wide, open anchorage is fine with S or SE winds providing the prevailing SW swell is slight.
After lunch we set sail for Point Sir Isaac, the NW tip of Coffin Bay Peninsula, which we passed about 90 minutes later, sailing past Seasick Bay en route.

We were now sailing the waters of outer Coffin Bay. Next stop, Gallipoli Beach.