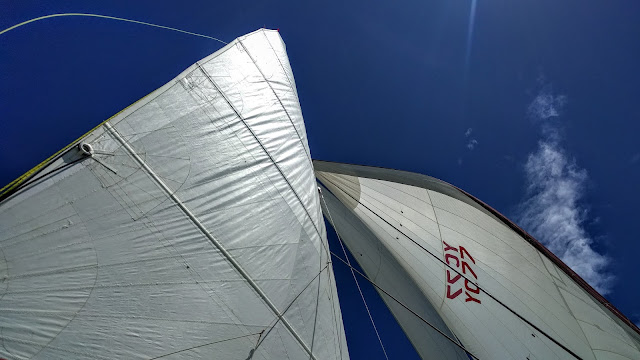 Yesterday Arriba raced in the second King of the Gulf (KoG) race from Adelaide to Port Vincent. The KoG, which is organized by the Multihull Yacht Association of South Australia (MYASA), has doubled in size since last year.

There were a few, frantic last minute repairs on Arriba. The night before (in darkness), I'd (optimistically) attempted to raise my gennaker halyard by myself, and it got stuck near the top. I should have stopped winching right then, since one extra turn was all it took to shear the double braid from the halyard (left below). Fortunately the poly inside was not damaged so I stitched it up. Regardless, I'll be replacing that halyard soon though. 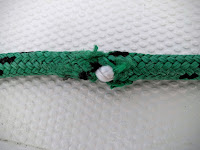 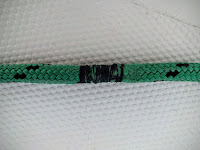 Winds were light at the start of the race and, reminiscent of last year, we struggled to cross the start line on time. Actually "struggle" is an understatement; we were the very last to cross. Suffice to say, Arriba does not tack well in light winds, and the skipper needs to improve his start tactics! We got backwinded one boat length from the committee boat, and barely managed to avoid an embarrassing fender bender.

Unlike last year, which was a straight shot from North Haven to the Orrontes Beacon, our course this year required first pointing SW into a headwind. We opted for speed over angle, and kept Arriba's gennaker up. After blowing our 2nd tack (twice), we decided to switch to the jib. Once past the mark it was back to the gennaker though, sailing 60° to the wind. The wind slowly picked up and we enjoyed a great sail across to Port Vincent, completing the race in 4 hours 55 minutes.

By now we reckon we'd earned ourselves a beer so we walked to Ventor Hotel, the local "water hole". 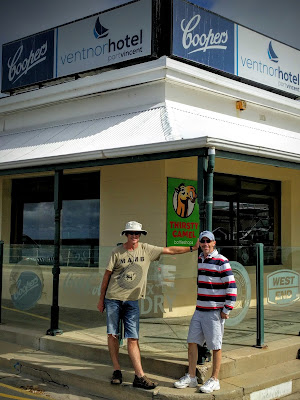 The scenic footpath that follows the beach from the marina into town has these cute signs that play off Yorke Peninsula's leg-like shape. 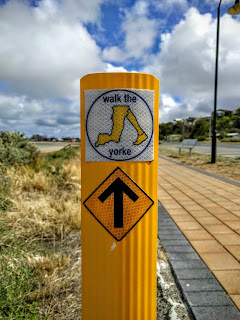 Shane Roberts, the new owner of the Ventor kindly gave us a ride back to the marina in the pub's courtesy van. MYASA again hosted an excellent dinner and awards ceremony at the marina. It was an early night for us though, as we're heading back to Adelaide at 05:00.