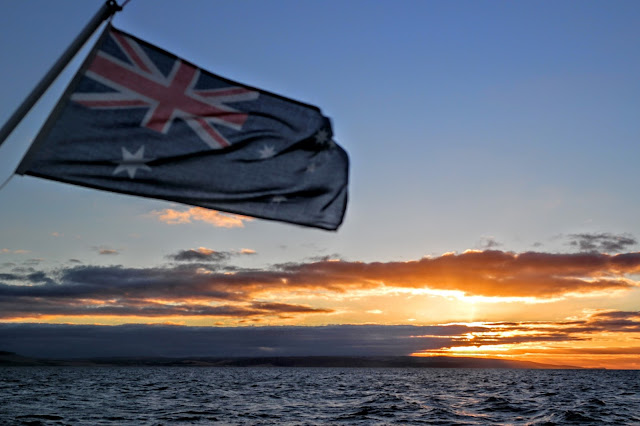 Sailing along the North Coast of KI, with a beautiful sunset behind us and music blaring; life was good!

Upon leaving Western River I'd initially considered heading for Emu Bay (35°35.4'S 137°31.2'E), which we could theoretically reach before dark. However we needed to bear away out to sea to get on onto a close reach to take maximum advantage of the wind and by the time we were abeam of Emu Bay we were 3 nautical miles offshore. Rather than motor dead upwind, I decided to alter our course 30° degrees to starboard and head for Boxing Bay, 5 miles further. We needed to furl our headsail, but we could could keep the mainsail up and motor sail. Those extra miles however meant we'd be arriving in darkness, however Boxing Bay is a wide sandy bay with limited hazards.

NB: When approaching Boxing Bay from the west, avoid the rocky reef that extends north of White Point (-35°33.8'S 137°35.5'E) for 200 m. The SW corner of the bay is the shallowest. Boxing Bay reportedly has very good fishing.
We awoke to a 15-knot wind from the SE. Continuing onto Eastern Cove and American River would have meant subjecting ourselves to several hours of head winds, so instead we set course for Kingscote, only 12 nautical miles away. Trolling two paravane lures as we went, we hooked one Tommy Ruff and 5 Snooks, like the one below. Mitch let few big ones get away though :-)
We anchored right in front of the Ozone Hotel at 11:25. Kingscote is a poor anchorage in a SE wind, being exposed to the full fetch of Western Cove. Nevertheless, it is very convenient to pubs and shops, which was deemed our top priority. Everyone enjoyed lunch at the Ozone followed by wandering around town for an hour or so. Back at the beach we were dismayed to see that Arriba's RIB dinghy was completely deflated on one side, and further inspection revealed a long puncture to the underside. Evidently yours truly had been a bit careless coming ashore and dragged the dinghy over some sharp limestone rocks. I spent the next 40 minutes walking around Kingscote looking for a rubber puncture repair kit. Two hardware stores, one tire store and a marine supply store later (the latter closed), I had a potential solution. The helpful folks at Mitre 10 thought that pond liner (rubber) with a flexible rubber glue called "Fixall" might work. They kindly gave me a couple of rubber off-cuts for free and even cut them into patches for me.
I glued the patch on, being careful to keep the repair area free of sand. It would take 90 minutes for the glue to cure (with full strength in 24 hours), so I encouraged everyone else to go wine tasting at Bay of Shoals Wines. No taxis in Kingscote meant 40 minutes on foot! All going well, I would take Arriba around to the Bay of Shoals and pick them up in about two hours.

By now it was gusting to 20 knots at Kingscote; great kitesurfing conditions, but horrible conditions for boarding a bouncing yacht. I swam the 150 m out to Arriba, collected the inflatable pump and then kayaked back to shore. Back on the beach I started to worry that it might be difficult towing the kayak behind the bouncing dinghy in the waves. I therefore kayaked out to Arriba, stowed the kayak and swam back to shore. All I could do now was wait until the 90 minutes was up. There was nothing for it but to take a nap on the beach.

Finally, the moment of truth. I inflated the dinghy, and SUCCESS - it held! I excitedly motored out to Arriba, getting absolutely soaked in the process, and then motored Arriba around to the Bay of Shoals, 2 nautical miles away, anchoring just west of the boat ramp in only 2 m. The boat ramp has a convenient pontoon dock for small boats. While too tight for Arriba, I was able to ferry everyone back on board in two dinghy trips, heavily laden with boxes of wine. The patch, barely cured, was still holding fast after all those trips, so I'm officially impressed with FixAll by Soudal. And a special shout out to the friendly folks at Kingscote Mitre 10.

With more time (and energy) I would have been inclined to sail over to Red Cliffs (35°44.0'S 137°43.53'E) and get completely out of the wind, but we were all feeling tired and so I decided to stay put at the Bay of Shoals. We feasted on barbecued whole Snook (marinated for an hour in olive oil, bay leaves, rosemary and lemon), marinated beef, and corn on the cob. Yum!

At 05:30 I awoke to a sharp thud; one of the fishing hand reels had blown off outside table and gone flying, smashing into the side of the cockpit. I tried to get back to sleep but it is was hopeless, so at 06:25 I raised the anchor. Besides, the wind was picking up and it is generally a good idea to cross Backstairs Passage as early as possible in the day.
By the time we rounded Reeves Point (35°38.34'S 137°38.48'E) it was already gusting to 20+ knots! For an hour we motored into the wind until finally passing the last channel marker, raising sails and setting course for Rapid Head. We were sailing with reefed main and jib in 25 to 30+ knots winds from the SE against a NW ebb tide. Wind against tide = very bouncy ride!

NB: If it were not for the constraint of my crew needing to be on the mainland in time for their flights home, I would have preferred to have waited for the tide to turn before sailing across Backstairs Passage.

Arriba was going much slower than expected though, making barely 5 knots, and her bows were plunging more than usual. Then I noticed the shocking problem. The anchor had come loose and was dragging in the water! In my haste to depart earlier I'd neglected to shackle the anchor, and it had wiggled loose with all the bouncing. I quickly fired up the engines and turned into the wind so I could retrieve the anchor, which mercifully came up easily. With our "sea anchor" properly secured our speed quickly shot past 7 knots. Vanessa shot this footage of the "washing machine" from the port cabin.

The next few hours were quite an adventure for everyone, but Arriba was now riding much better. Then, at last, bliss. We entered sheltered waters, the wind suddenly dropped to 10 knots and the seas were flat. We immediately fired up the barbie and had a traditional Australia Day brunch of bbq'd lamb chops and sausages, plus some healthy green stuff.

By now everyone was ready for some calm water and a swim so we put in at Second Valley for 1 ½ hours. The place was absolutely packed for Australia Day (January 26th), but who needs space on the beach when you have a boat?
From Second Valley it was only 20 minutes back to Wirrina, where we arrived at 14:25.