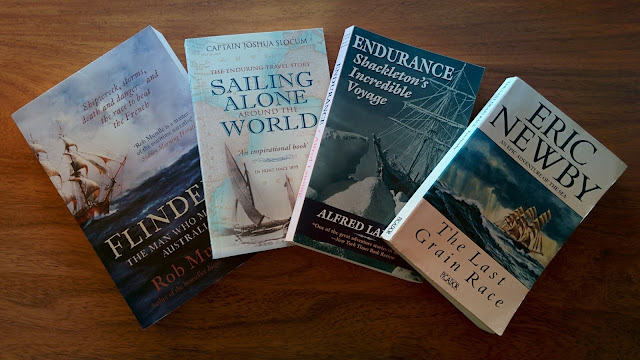 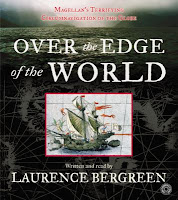 “Over the Edge of the World: Magellan’s Terrifying Circumnavigation of the Globe” by Laurence Bergreen is a fascinating account of the life of Ferdinand Magellan culminating in the first-ever circumnavigation of the globe. The three-year odyssey from 1519 to 1522 remapped the world and changed prevailing views of our planet. Bergreen’s book is a very readable blend of history, swashbuckling adventure and nautical feats. Even the details of the voyage's preparation are fascinating, and there’s plenty of hard sailing too as Magellan’s battered fleet, or what's left of it, makes their way around the globe. Antonio Pigafetta, the Italian scholar who accompanied the expedition deserves a special mention for chronicling this adventure.

Fast forward 200 years and the Age of Discovery was still in full force, with much of the focus on exploring Terra Australis, the Great Southern Land we now call Australia. I’m a big fan of Rob Mundle’s historical sailing books, and all three of the following are set in the 18th century.

Mundle’s latest book “First Fleet” is the fascinating story how 11 ships setting out from England in 1787 traveled 17,000 nautical miles to found Australia. While not purely a sailing adventure, it’s an epic historical narrative with lots of sailing. There are also some interesting side stories such as rescue mission of Capt. John Hunter who sailed from Sydney to Cape Town via Cape Horn.

“Bligh: Master Mariner” is another great read. If, like many, you thought Capt William Bligh was a tyrant of a captain, you would be mistaken. This book tells a more balanced story of his life and, in particular, an enthralling account of one of the greatest ever feats of navigation, seamanship and human endurance. On 28 April 1789 Bligh and 18 crew were cast adrift from “HMS Bounty” by mutineers. Despite the odds, they survived a perilous 47-day passage in their open boat, which was only 7m (23’) in length, successfully navigating 3600 nautical miles to Timor.

Then there is “Matthew Flinders – the Man who Mapped Australia” which is a great account of another of the world’s greatest navigators and his circumnavigation of Australia. Incidentally, Flinders named “Kangaroo Island" in appreciation of the kangaroos which fed his hungry crew, somewhere in the vicinity of Kangaroo Head.

By the 19th Century most of the world had been mapped, but offshore sailing was still a risky affair for only the intrepid or desperate.

In 1840, Harvard student Richard Henry Dana, after suffering from measles, decided that some sea air would do him good. So at a time when it was trendy to do the so-called “Grand Tour” of Europe, being a nonconformist, he instead enlists as a common sailor. “Two Years Before the Mast” is his fascinating account of his voyage around Cape Horn to California on the “Pilgrim”, and back again on the “Alert”.

In contrast to Richard Henry Dana, who was a young man, Joshua Slocum was in his 50’s when he set out to sail around the world single-handed in 1898, in “Spray” his 36’8” (11.2m) sloop. Slocum's “Sailing Alone around the World” is still a classic, with fascinating accounts of places visited, close encounters, and the sailing techniques he employed.

The first half of last century also produced some some great sailing adventures too:

While Bligh’s odyssey wins the distance record, Shackleton’s grueling voyage in some of the most hostile stretches of the Southern Ocean wins the endurance record. “Endurance: Shackleton's Incredible Voyage” by Alfred Lansing describes what must surely be one of the most incredible feats in the history of sailing, navigation and sheer grit, namely Ernest Shackleton’s 1915 voyage to find help for his stranded crew. In an open 20’ (6m) boat he navigated across 800 nautical miles of storm-swept ocean, from the extremely desolate Elephant Island to the only slightly less desolate South Georgia Island.

“The Last Grain Race” is Eric Newby’s personal account of one of the last great clipper ship runs to Australia. Every year from 1921 to 1939, sailing vessels involved in the grain trade would strive to find the shortest, fastest passage home, dubbed “the grain race”. Newby sailed aboard “Moshulu”, the largest sailing ship still transporting grain from Australia to Europe. Although hard to read at times, it’s worth persevering if, like me, you're interested in clipper ships.

Last but not least on my list, “Kon-Tiki” by Thor Heyerdahl chronicles his amazing journey of 4,300 nautical miles across the Pacific Ocean. Heyerdahl believed that the South Pacific Islands had been settled by ancient South Americans, and in 1947 decided to prove his theory by repeating the legendary voyage - on a flimsy balsa raft!

NB: Recent genetic evidence shows that Polynesians and Micronesians are mostly related to the original inhabitants of Taiwan, although some Easter Island inhabitants have South American origins.

I'd love to hear your recommendations for historical sailing non-fiction too.