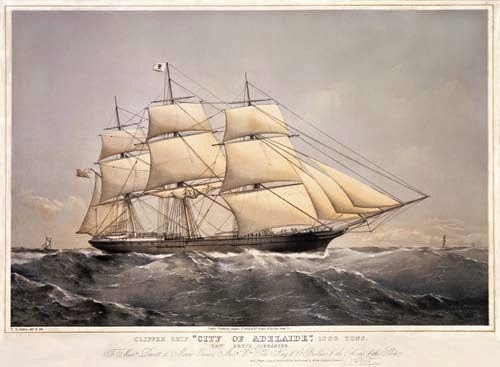 Sailing has been pivotal to communities around the world, but few places benefited more than South Australia in the 19th century. East to west the state is 1,200 km (745 miles) wide, but the coastline is a tortuous 3,800 km (2,360 miles) long. This is largely due to the prominent indentations of two large gulfs. In the east, the smaller Gulf St Vincent separates the Fleurieu Peninsula from the boot-shaped Yorke Peninsula, and in the west the larger Spencer Gulf separates the latter from the massive Eyre Peninsula. The result is that sea distances are often much shorter than land distances. For example, consider the following distances:


Note: Spencer Gulf is geographically unusual because it is an “inverse estuary,” meaning the further inland one goes, the saltier the water becomes.

Both peninsulas are blessed with a Mediterranean climate well suited to grain farming, and close proximity to the coast meant that cheap sea transportation made it profitable. Although Tasmania was initially Australia’s wheat granary, South Australia's lower transportation costs gave it an economic edge. Within a decade of European settlement, South Australia became Australia’s biggest wheat producer, and held the lead for half a century; surpassed only by Victoria in the 1890s with the advent of widespread railways.

Grain that was destined for export markets, including the other Australian colonies, would be loaded onto ocean-going clipper ships, such as the City of Adelaide (shown above). You may be surprised to learn that grain was still exported by tall ships well into the 1930s, long after the advent of steam ships. Eric Newby’s “The Last Grain Race” is a vivid account of this era.
Local, intra-colony markets however were served by a fleet of small sailing boats, trading out of Port Adelaide. They would take out machinery and other supplies from the capital of Adelaide, and bring back cargoes of grain. These were usually locally-built timber ketches typically less than 30m (100’) in length, with retractable centre boards that allowed them to sail through shallow waters. In the final decades of the 19th century some larger, iron vessels were introduced. Collectively they were known as the “Mosquito Fleet” because of their small size and ability to handle shallow waters. The boats were typically handled by a skipper and two crew, who fished for their own meals and bathed in seawater. Hardy folk indeed!


A ketch has two masts, with the mainmast being the forward and the larger of the two. A cutter is a single-masted boat, with often a bowsprit and two or more headsails. Ketches were considered to offer more flexibility than cutters, especially in heavy weather, with the smaller sails being easier to handle.

Gulf ports were often primitive. Loading and unloading usually entailed tediously ferrying cargo back and forth in small dinghies. Other times it meant taking advantage of low tide to deliberately ground the vessel and quickly unload and load cargo, before floating off at high tide. Over time wooden jetties were constructed at many ports, but they were often damaged by storms and as a result were in constant need of repair. Sadly, many of the old jetties are now gone for good, with often only the pylons remaining.

The fleet peaked at the end of the 19th century, with approximately 70 ketches and cutters operating out of Port Adelaide. The last two Mosquito Fleet vessels operating were the Nelcebee (built in 1883) and the Faile (built in 1919). Neither were in the grain trade though as both were used to transport gypsum mined near Pelican Lagoon, Kangaroo Island, up until 1982.

These days, the hustle and bustle of South Australia's old gulf ports belongs to a bygone era, but the coves, beaches and historic towns are delightful sailing destinations, and most are within only a day or two's sailing from Adelaide.