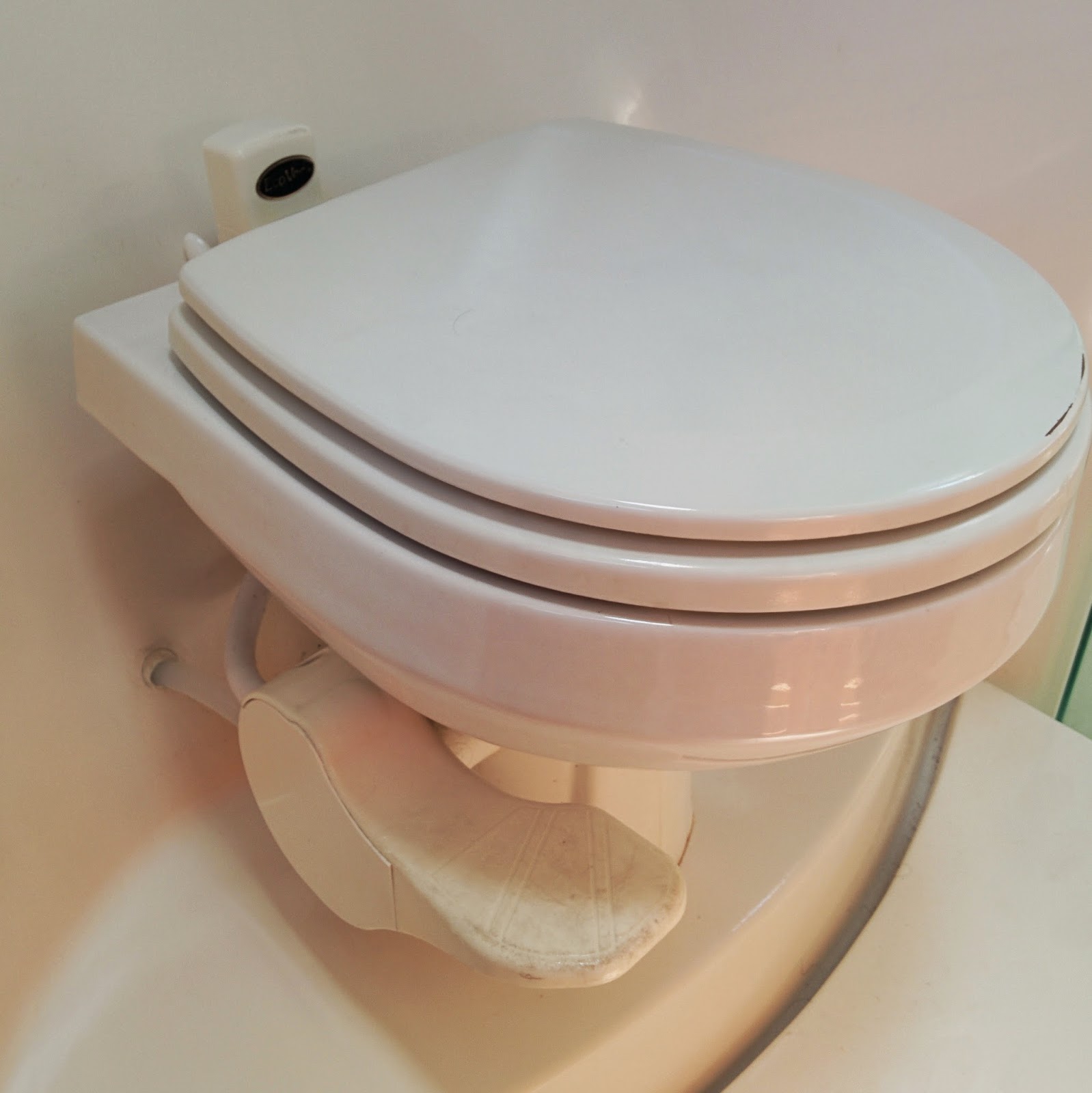 This may not be the most glamorous topic, but I’ll wager that every sailboat owner with a marine toilet eventually encounters this problem - the "head" has stopped working. The exception might be older boats that have a manual marine toilet, i.e., the kind operated with a hand pump. These tend to be simple and reliable; do your business then pump it out. About the only thing that can go wrong is a clogged discharge pipe, from being, err, too exuberant.

NB: In the olden days it was possible to simply pump effluent straight overboard. That practice is now illegal in the coastal waters of most countries, and a holding tank is now required.

Modern boats often come with electric vacuum toilets, which are considerably more complicated. They suffer from so many possible failure modes that one wonders how they ever work at all, and yet they mostly do. Arriba has SeaLand “Vacufush” toilets and the troubleshooting guide identifies an impressive list of possible failures:
Yikes! In my case, the problem was that the vacuum pump would not shut off. It’s not only bad for the pump to run continuously, but drawing 6 or 8 amps is a big drain on your batteries.

But first, it’s useful to understand how vacuum toilets work. The principle is simple, i.e., use a vacuum to suck effluent from the toilet into the holding tank. A vacuum pump creates a vacuum in a small tank which is installed between the toilet and the holding tank. The pump and tank are often combined into one unit called a “vacuum generator”. The hose upstream from the vacuum generator to the toilet is also kept under vacuum (the grey area in the diagram), so the instant the toilet flush ball opens, swoosh, everything is sucked away. Air is drawn in (at one atmosphere of pressure) and the vacuum dissipates. The vacuum switch senses the loss of vacuum and energizes the vacuum pump, restoring the upstream vacuum. The air and effluent that is sucked in from upstream is simultaneously pushed downstream into the holding tank (which is not under vacuum). The beauty of a vacuum system is that “downstream” does not need to be “downhill”, as in a land-based sewer system. 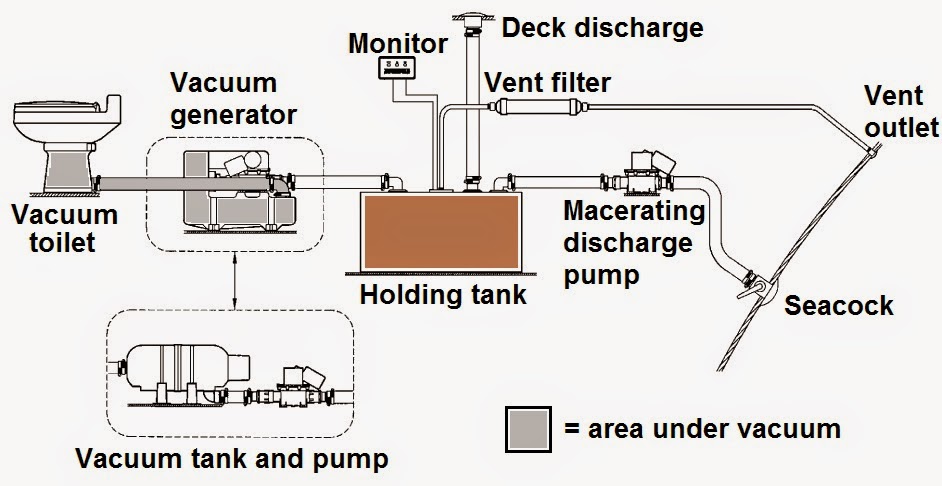 Back to my problem of the vacuum pump running continuously. The troubleshooting guide listed 5 possible causes:
I promptly ruled out improper wiring (#4) since it had previously worked and I’d rewired nothing. Insufficient vacuum (#2) or a faulty vacuum switch (#3) would have been trivial to diagnose if I’d owned a vacuum gauge, but I didn’t. Bellows not pumping (#5) would require taking the pump apart, a messy, smelly job I was rather keen to avoid, or at least postpone. So I started down the path of least resistance, namely diagnosing a vacuum leak (#1). The conventional wisdom is to replace any worn ball seals and duckbill valves, so I dutifully ordered the official parts from the SeaLand distributor, which I have to say are shockingly expensive for small pieces of rubber. Alas, replacing all seals and valves did not fix the problem.

Still not owning a vacuum gauge, I guessed the problem might be a faulty vacuum switch. Fortunately Arriba has two heads and my starboard one was still operational, so somewhat reluctantly I took apart the working one to cannibalize its vacuum switch. However installing the working vacuum switch into the port vacuum generator did not fix the problem either, implicating the pump as the root cause.

I finally resolved to purchase a vacuum gauge., which I found on eBay for $15 (¼ the price of the SeaLand vacuum tester). Also, having spent more than enough time scrunched up in my engine bay tinkering on the vacuum pump, I decided to remove it and take it home. Since I suspected the pump was kaput, I figured I might as well take it apart and clean it. All I can say is, wear gloves! The pump chamber and bellows were caked in solidified excrement (photos withheld).

To test the vacuum pump you'll also need about $10 in 1½" irrigation parts from your hardware store. Be generous with the teflon tape at each screw fitting, since it takes only a microscopic gap in the connection to lose a vacuum. Attach the gauge to the input, then let the pump run for a few seconds before screwing a plug into the output. If you screw in the plug before you start pumping the evacuated air will have nowhere to go! Make sure you have two duckbill valves on the input side, although just one on the output is sufficient for testing purposes. It's unlikely you'll achieve -10 Hg of vacuum with this simple setup, since the effective vacuum "chamber" is tiny, but you should measure at least -8 Hg and it should be steady.

Side note: You may remember from your high school science that vacuum is measured by its absolute pressure, in Bar (metric) or Hg (inches of mercury) (imperial). Atmospheric pressure is 1 Bar (~ 30 Hg) and 0 Bar (0 Hg) would be a perfect vacuum. Vacuum gauges typically start at zero though and go more negative with increasing vacuum so -1 Bar (-30 Hg) denotes a perfect vacuum.

My dodgy pump achieved at best -6.5 Hg of vacuum and slowly leaked. I ordered a new pump which achieved -8 Hg and held a vacuum indefinitely.

Reassembling the vacuum generator requires some care:
One maintenance tip I learned is to flush some warm soapy water through the system once a month, as it helps to clean the duckbill valves. I also have this sign over the head to remind landlubbers! 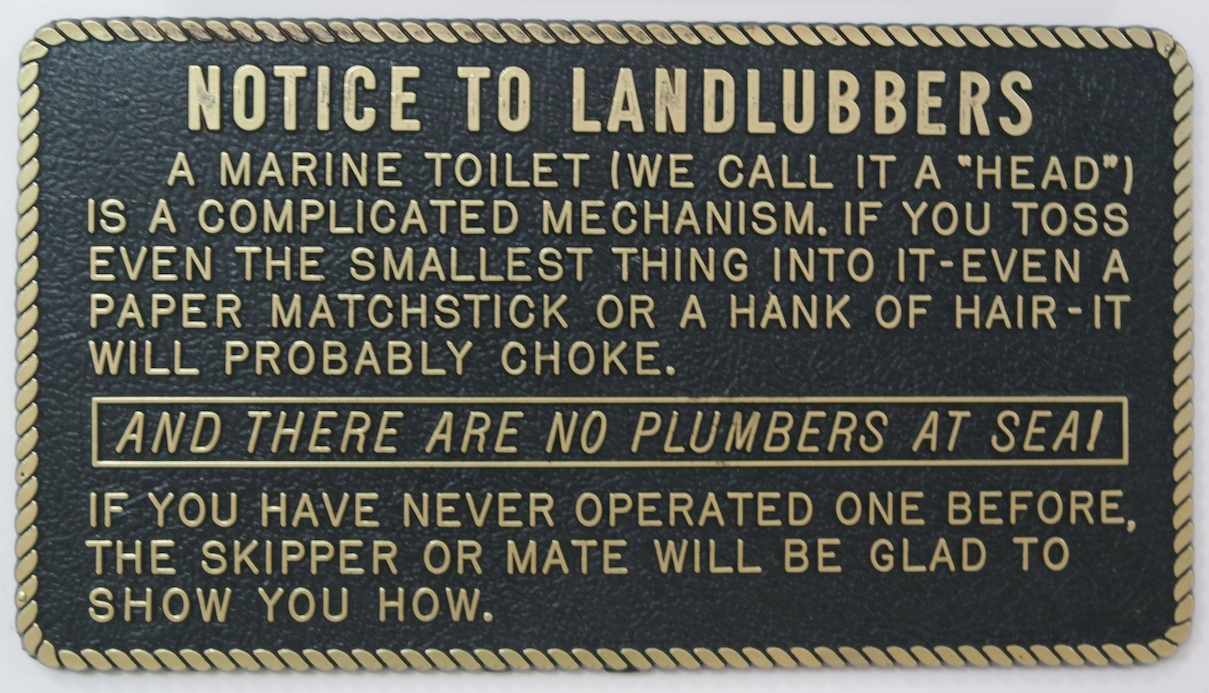