After rounding Cape Borda we came in close to shore to take a look at an anchorage called Scott Cove or Scott’s Cove (35°44.92’S 136°37.75’E). Although it’s hardly more than an indentation in the cliffs it offers protection from southerly winds from SE through SW, and possibly westerly winds in a pinch. The W swell was completely blocked by Cape Borda. For this reason it was crowded with fishing boats though so we continued eastwards.
Half a nautical mile east of Scott Cove is the tiny Harveys Return (35°44.88'S 136°38.34'E), also occupied by fishing boats (note there is no apostrophe in the name). This anchorage offers protection from E through SW, but is more exposed to W swell than Scott Cove. Supplies to Cape Borda lighthouse were once delivered via this cove.

Cowell writes favorably of the De Mole River anchorage (35°42.7'S 136°46.7'E) near Cape Forbin, 8 miles east of Harveys Return and 3 miles east of Cape Torrens (35°43.23'S 136°43.24'E), so we continued on our way.
De Mole River offers the same protection as Harveys Return, i.e., from E through SW, but is a bigger cove. Indeed, the high cliffs made it completely windless, but with W swell it was a slightly uneasy anchorage. Nevertheless we'd gone far enough for one day, 70 nautical miles to be precise, so we anchored at 19:00.

During the night while I snoozed my crew members formed the view that we'd drifted and woke me. In fairness, our track on the chart plotter was a wiggly one and the anchor drift alarm was shrieking, but it was only set to a 20m alarm radius. We had certainly moved but I was far from sure we were dragging our anchor. The dark cliffs offered no real bearings, so I decided to reset the anchor just in case. I brought Arriba in closer to shallower water and went back to sleep.
The next day we awoke to discover that we were barely 60m from the beach and our anchor was 35m between us and the beach - meaning I'd dropped anchor barely 25m from the beach the night before, and let out rather too much rode. Mea culpa!

But there was one more problem. We'd inadvertently left a squid jig in the water when we'd moved during the night and it was now spaghetti around Arriba's port prop. It was such a mess it took me 10 minutes under water on the Hookah to untangle.

With those issues resolved, we lowered the dinghy and set a kedge 25m to stern as a precaution to keep us from being broadsided by a roller. Then, ever so patiently, we moved forward, winching up the anchor chain while releasing an equivalent amount of kedge line. Finally Arriba's bow was directly over the anchor and we were able to retrieve it. We moved further out into the cove and were finally able to enjoy breakfast. The episode must have been very amusing to the fishermen anchored in deeper water, one of whom helpfully came by to offer help.

Note: Always carry one or two spare anchors with sufficient line for use as kedges.

At noon we weighed anchor and set sail in light winds for Snug Cove. By now we'd replaced our tuna lures with smaller lures on paravanes, and we hooked a West Australian Salmon (a.k.a. Salmon Trout) shortly after leaving De Mole River and an Australian Snook (or Pike) later in the day.

Approaching Snug Cove one is greeted by a spectacular triangular rock on the east side. 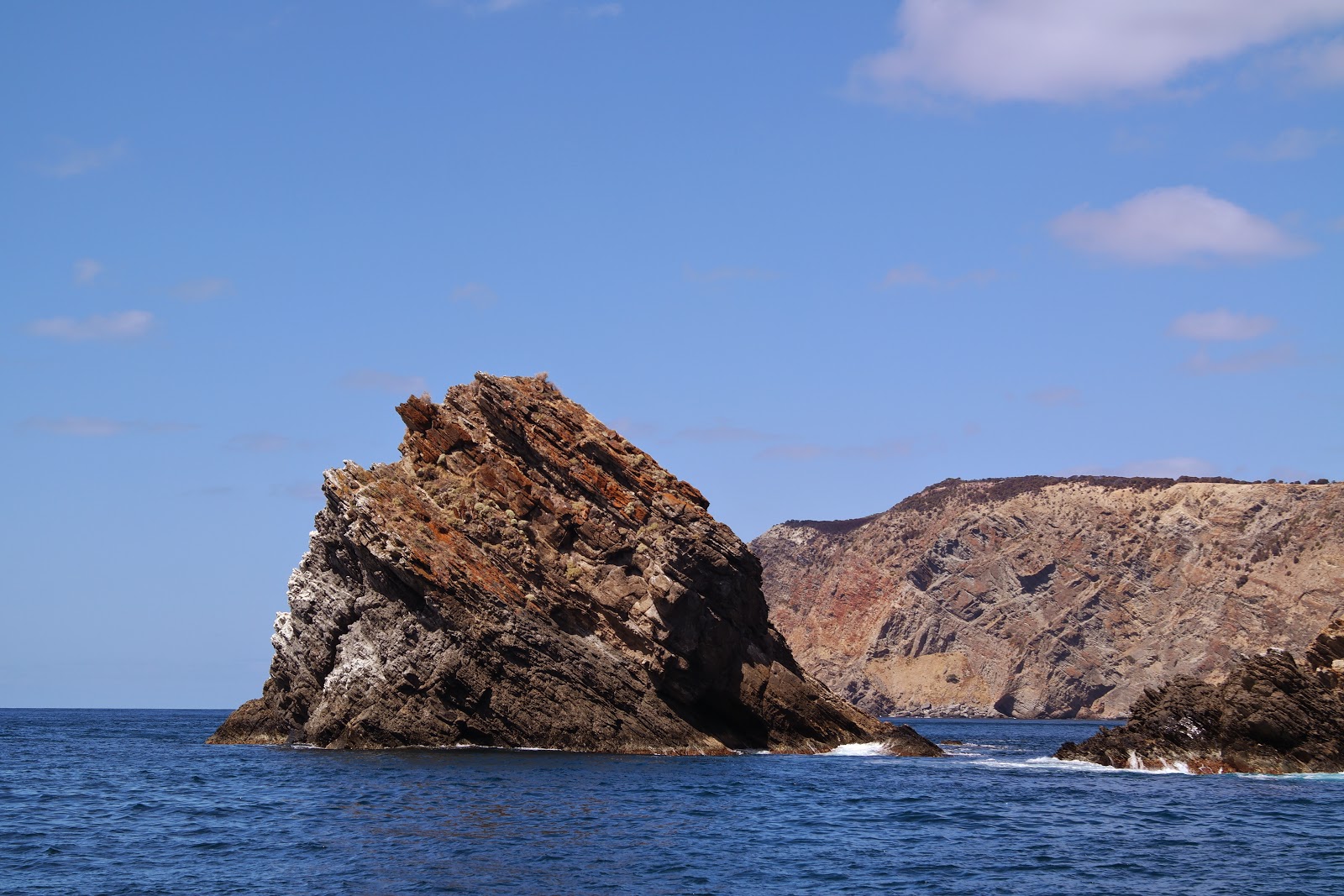 We entered the cove at 13:30 and took one of the three moorings. Grabbing the mooring was made difficult by the fact that Arriba's telescoping hook had been swept over board in the Southern Ocean, so my crew were using a much shorter fishing gaff in its place. On our first attempt we dropped the mooring line and it snagged around Arriba's starboard prop. Unlike the squid jig earlier, it was easily untangled though.
After lunch we continued on to Western River Cove, 7 miles further east. This is my number one anchorage on the NW coast and we spent the night here, joined only by a fishing boat. We enjoyed happy hour around a campfire on the beach.

The fishing boat departed the next morning at 06:30, lights ablaze. Since I was now awake I decided to kayak and walk around the cove to enjoy the morning twilight.

At 09:00 we weighed anchor and motor sailed for Knob Point, catching another snook en route. We anchored in the tiny cove to the west of Knob Point at 12:15, and feasted on a barbecue lunch of snags and snook.
We set out an hour later, once more motor sailing with mainsail alone. Our destination was Red Cliffs (35°44.0’S 137°43.53’E) in Western Cove, which we reached at 19:05.
That night we enjoyed some particularly splendid wines accompanied by a fruit and cheese platter.

Sunrise the next morning was brilliant as the cliffs were positively radiating orange.
After our morning swims, we got underway at 9:09. Today, Thursday February 26, we would farewell Kangaroo Island.

At 12:59 we crossed our outbound track at longitude 138°5.5'E, which we had first passed at 23:12 on February 21. We had therefore completed a circumnavigation of Kangaroo Island in 4 days, 13 hours, 47 minutes, covering a distance of 219 nautical miles (406 km). Not exactly a speed record, but we had done it in style!
At 14:30 we anchored at Second Valley on the mainland and went ashore for a walk.
The next day we set out at 07:30 in light winds. We reached Myponga Beach at 09:45 where we stopped for a swim, before continuing onto Maslin Beach.
Approaching Gull Rock near Blanche Point yours truly came in a wee bit too close and briefly ran aground. The charts indicate 2m of water where there is only 1m - but that is of course no excuse. We set a kedge astern and winched off in reverse, suffering only nicks and scrapes to Arriba's hulls - and damage to my pride.
We stopped for lunch just south of Ochre Point at the northern end of Maslin Beach, before getting underway again at 14:00. At 17:52 we were back at North Haven, having traveled 330 nautical miles (612 km) and completed Arriba's first circumnavigation of Kangaroo Island (our route).