On a recent sailing trip I remarked to a crew member that catamarans usually cruise on only one engine. He was a bit surprised, because his intuition was that the boat would be off balance and therefore less efficient. In fact, cats are quite efficient motor boats with just one prop running. Here’s some data for “Arriba” my Lightwave 38 and “Hands Across the Sea,” a Dolphin 44 (source).

This explains why cat cruisers only run one engine, but it leads to two questions:

Every sailor knows that sailboats are subjected to many different forces which need to be balanced. Any time the center of effort (COE) is not vertically aligned with the center of lateral resistance (CLR) a torque is produced around the yaw axis. For example, whenever the COE is aft of the CLR the boat has tendency to turn into the wind, known as “weather helm” (which is invariably the case if you're using your mainsail without a headsail).

Similarly, running one engine on a catamaran means the propulsion force (effort) is not aligned with the CLR, which left unchecked results in a yaw rotation. For example, running just the port engine (shown below), the port prop generates a left-hand yaw torque (viewed from above), which spins the bow to starboard. Conversely with just the starboard prop there is a right-hand torque which spins the bow to port. Let's call this tendency of a catamaran to turn away from the spinning propeller “prop helm” (analogous to "weather helm"). 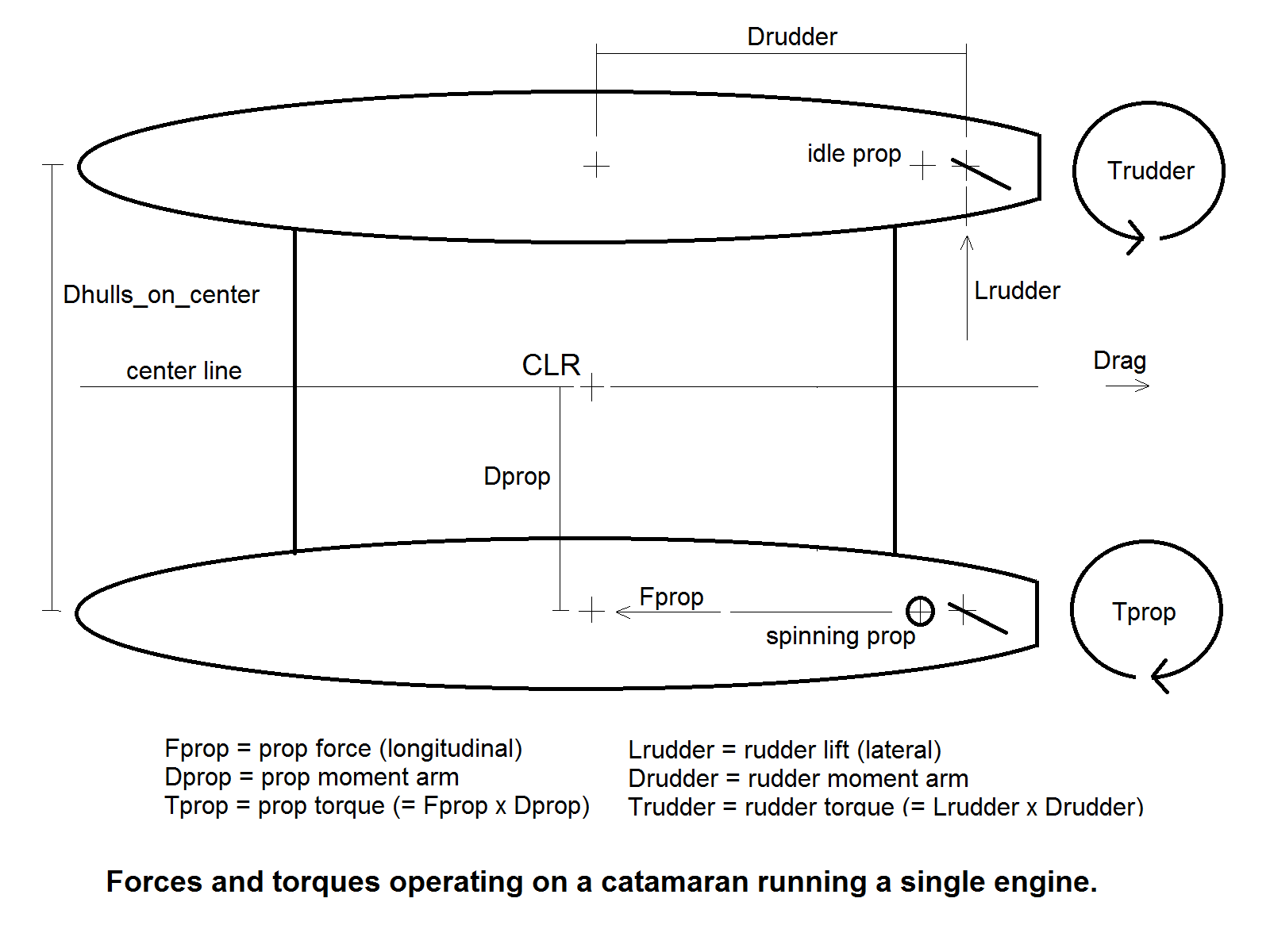 We can calculate an approximate value for prop helm by assuming that all of the running engine's power translates into torque, as follows:

That's equivalent to a torque wrench with a handle 150 times longer than the 100 Nm wrench in your tool box!

NB: This is all very approximate. I've assumed that the rudder water velocity is equal to boat velocity and the lift coefficient is a guesstimate. I've also ignored drag. Please let me know if you spot a problem.

Nevertheless I think it demonstrates that a relatively small rudder angle is sufficient to counter prop helm. Not only is the magnitude of the rudder lift reasonably large, but since the force is lateral in direction, not longitudinal, the rudder's moment arm to the CLR is larger than the prop's, i.e, Drudder > Dprop. It also makes you realize that the forces involved in a big roundup or broach must be very large to overcome your rudders.

Tip: When motor sailing (on one engine) you can use prop helm to your advantage to minimize rudder angle and rudder drag. Running the port engine is equivalent to steering to starboard and vice versa.

The maximum speed of a displacement hull, referred to as hull speed, is given by Froude’s law:

In reality, catamarans are hydrodynamically efficient and can go faster without resorting to planing. In terms of the formula, Froude numbers increase for hulls where the waterline length to hull beam ratio exceeds 8:1. For example, Ariba’s LWL to hull beam ratio is 11.5:1.

NB: Hull beam is maximum width of a single hull, not the vessel's beam.

The hydrodynamic efficiency of skinny hulls means it takes less engine power to achieve a given speed. But wait! You say, “cats have two hulls and both need to be pushed, and both create drag.” Yes, indeed. Which goes to show that if a single engine at cruising RPM can move the vessel at ¾ of its maximum displacement speed, then most cats are simply overpowered with two engines.

In fact, I think the only time you really need two engines are (1) when you're parking and (2) when you're punching head on into strong winds or against a strong tidal flow. The rest of the time you should enjoy the fuel efficiency of running on a single engine; or, better yet, sailing with no engines.