I’ve been sailing a cruising catamaran for nine years now and along the way I’ve learned a few things about cats that they don’t usually teach you in sailing school. Here’s 10 of them.

For sailors this has nothing to do with felines! Unlike monohulls, cruising cats don’t SHOUT OUT the fact that they’re overpowered by dramatically heeling over. Many interpret this to mean that cruising catamarans don’t provide much feedback. In fact, the signals are there, just more subtle. For example, when a cruising cat starts to get overpowered it will heel, albeit just a few more degrees. When you’re accustomed to almost zero heeling, it is noticeable. Also, like a mono, the helm requires a heavier touch than usual, and your bow starts to plunge more often. So learn “cat sense” and know the signals that will tell you when it’s time to reef. Apparent wind speed is obviously a guide, but it’s not just about wind speed.

NB: In contrast to a racing cat which will probably capsize when overpowered, an overpowered cruising cat is more likely to incur sail or rig damage well before the point of capsizing, since its greater mass both resists heeling and limits its ability to shed power quickly.

Make the most of your cat’s beautiful beaminess by utilizing the full width of the traveller to adjust the mainsail. With the traveller positioned directly under the boom, the force on the mainsheet is mostly vertical and therefore more effective in pulling the boom down. This makes it's easier to control an efficient sail shape, largely obviating the need for a boom vang. Also, when closehauled, bring the traveller slightly to windward until the boom is centered.

Even with two hulls, the total wetted area, i.e., the area immersed in water, is typically less than a mono of the same length. The downside is that it takes less time for marine growth to cover a larger fraction of your hulls, which can easily cost you a knot of two of boat speed. So clean your hulls regularly.

Tip: No one ever tells cat buyers that two hulls are more work to maintain. Invest in a Hookah to save time.

Cats derive their speed (and fuel efficiency) from their lightness. But just because your cat has massive storage space, as tempting as it is fill it with all of your toys, this doesn’t mean you should stuff it to the gills. In particular, keeping weight away from the bows and off the trampoline maintains forward buoyancy and reduces pitching. You don’t want stuff bouncing around on your trampoline in heavy seas.

NB: I used to keep my kayak on the trampoline until it practically bounced off during a rough crossing of Backstairs Passage.


5. One engine is enough

Having two engines is great for safety, but when cruising, one engine is usually enough. Running both engines will typically only add another couple of knots of boat speed. Here is why. So save fuel and engine wear and run just one engine. Further, with the idle engine's propeller folded, it's unlikely you'll ever simultaneously foul both props.

Tip: Maintain an engine log book though to even out the hours on each engine.

A great way to learn "cat sense" and to get a feel for how to trim your boat is to practice steering by sails alone. To do this center the rudders, lock the wheel, disable the autopilot, and adjust the traveller. Cats have great directional stability, so with practice you should be able to find the “sweet spot.” You may need to adjust the traveller from time to time. As a bonus, once properly trimmed, your re-engaged autopilot will need to work less than one that is compensating for poor trim.

PS: If you ever lose rudder control, you’ll be glad that you know this technique. More on the subject of emergency steering.

Lock the wheel (being careful to first center the rudders) and park with both engines, without using the wheel. You’ll have ample control steering by engine throttles, and with the rudders locked in place you’re less likely to end up doing something weird, especially when reversing. Anchor this way too.

The only time it’s really useful to have rudder control when parking is when moving sideways or “crabbing”. To do this put the furthest (outside) engine forward, the near (inside) engine reverse, and turn the rudder away from from dock.

If you do any offshore sailing, especially single handled, then jacklines running down the length of each hull are essential. However I also recommend installing a third jackline across the back of the cockpit, so you can move anywhere while hooked in. If you’re set up so all lines run back to the helm, this is probably the jackline you’ll be tethered to most of the time.

Tip: Buy a dual-hook tether like this, so you hook in to the new jackline before unhooking from the old one. 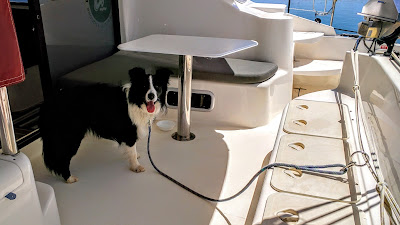 I’ve noticed that many cruising cats come with smallish jibs, often the convenient, self-tacking variety. It seems their main purpose in life is to smooth the airflow for the mainsail, not to provide a great deal of power. Genoas are an improvement, but gennakers, also known as “screechers”, are even better. Treat yourself to a gennaker about the size of your mainsail, and you’ll gain an extra few knots of boat speed.

Tip: It’s really easy to make a mess of the gennaker when furling or unfurling, so always keep some tension on the furling line. However don’t keep too much tension when furling otherwise you’ll damage your sail.

NB: Sailing a gennaker to windward can put enormous strain on the leach, so make sure your sail is built to withstand it. I had to reinforce mine after only 18 months of use, albeit hard use.

This final tip is for all sailors, namely the familiar mantra “when in doubt, let it out.” Many sailors have a tendency to over trim, myself included. I used to come about with a tight mainsheet and would get in irons more times than I care to admit. Many cats have fully battened, low-aspect-ratio mainsails with lots of roach, which for a given sail area lowers the Center of Effort (CoE) and reduces heeling. My sailmaker describes such sails as “roachy”; I say “short and fat”. Regardless, it’s all too easy to kill sail power by oversheeting. Easing the main sheet (and the traveller too) is essential to smooth tacking. Don't forget to ease the self-tacking jib sheet a little too.

NB: Tacking should also be done at full speed. If necessary, unsheet, fall off the wind a little to build up speed before coming about.

I hope you found these tips useful. Please share your tips too.