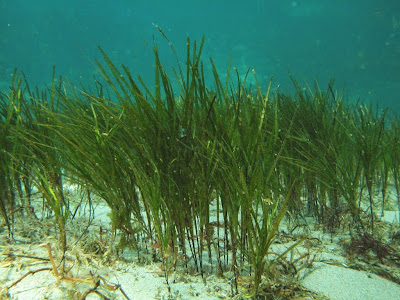 Have you ever cursed seagrass because it made it difficult to anchor? I confess I have. Many boats have come to grief when their anchor slid over the seagrass, failing to hold. I've experienced this firsthand and ran aground as a result, albeit less catastrophically than this yacht (before I upgraded my anchor).

In truth we should be very thankful for seagrass, as seagrass meadows create rich habitat for sea life, defend against coastal erosion and - along with mangroves and salt marshes - sequester carbon. This so-called “blue carbon” represents a whopping 55% of the world’s green carbon, i.e, carbon captured by biological organisms, but unlike trees, which typically sequester carbon for mere decades or centuries, seagrasses sequester carbon for millennia (according to this report).

Seagrasses are flowering plants, which photosynthesize just like land plants; not to be confused with seaweeds, which are plant-like algae. They are found fringing the coastal waters of all continents except Antarctica. My local (South Australian) waters are covered in extensive seagrass meadows of several species, such as Zostera muelleri (top photo).

Unfortunately most seagrasses around the world are suffering. Over a billion people live within 50 km of the coast and their activities hurt seagrasses. Runoff from towns and cities murkies the water, depriving seagrasses of vital sunlight, and marine activities have a similarly negative impact. For example, the satellite image below shows the damage caused by traditional chain moorings, which scour the seabed forming circular dead zones.

According to this report, seagrasses have been disappearing at an average rate of 110 km2 (43 square miles) per year since 1980, and we've already lost 29% of the known extent surveyed in 1879. Even worse, rates of seagrass decline are accelerating and are comparable to those for coral reefs and tropical rain forests.

Almost everyone knows about our threatened coral reefs and tropical rain forests, but hardly anyone knows about the plight of our beautiful seagrass meadows. Since learning about this, I feel very guilty if I inadvertently tear up seagrass with my anchor. So when anchoring I now try extra hard to find a sandy area to drop anchor. I hope you do too.