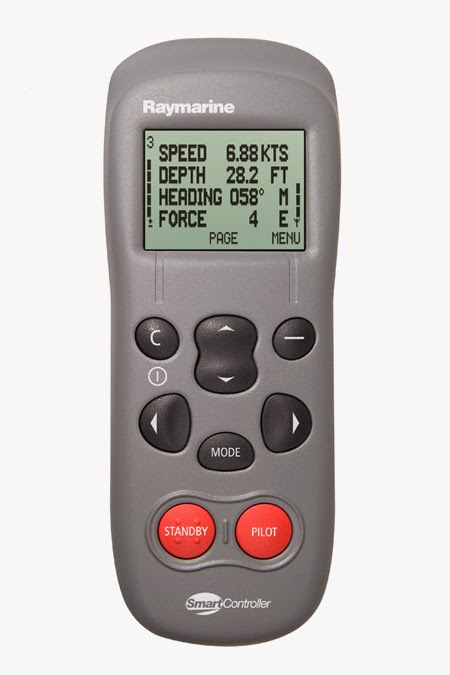 Last year I finally got around to installing an autopilot, which is undeniably Arriba's best equipment upgrade ever! In fact, I’d even go so far as to say that having an autopilot has revolutionized my sailing, and not just when I’m single handed. A quick flick into “auto” mode is all that is needed to free up the skipper to attend to an urgent task. Hold a bearing? Too easy! Maintain an angle of attack? Wind vane mode makes it a cinch! Come about? Done with the simultaneous press of two keys (and easy peasy with a self-tacking jib). Now if only my autopilot could brew coffee too :-)

The only problem, and it’s rather a first-world problem, is that controlling the autopilot means being physically at the helm. “Diddums” you say! Isn’t a skipper supposed to be at the helm? Well, yes, except when there’s an awesome pod of dolphins on display off the bow. Why should the skipper miss out on the action? Or perhaps the skipper is single handed and wants to go inside to make that elusive pot of coffee.

Fortunately Raymarine makes a neat gadget called a “Smart Controller” which, marketing jargon aside, is an autopilot remote control. There are two components to the Smart Controller. First there is the handheld “controller” which is a wireless remote control (shown above). Second, there is the base station, which in network terms is a “bridge”, since it interfaces the wireless communications with the SeaTalk network.

The base station should be mounted as high as possible. In my case, I found a location immediately inside from the helm and I was able to hide the SeaTalk cable by running it inside a stainless conduit that supplies power to my electric winch. In case you’re wondering, mounting it upside down makes no difference.

Note that the Smart Controller is a SeaTalk device, not a SeaTalkNG device. This means that if you have a SeaTalkNG network, you’ll need to install a SeaTalk-to-SeaTalkNG converter if you don’t have one already.

While the Smart Controller doesn’t offer all the autopilot control features available from the control head, for example calibration settings, it handles all the common operations. Also, in addition to autopilot control functions, it’s possible to monitor all of your sensors, i.e., depth, speed, heading, etc.

The Smart Controller comes with a SeaTalk cable for charging. Rather than have it hardwired, I soldered it to a 12V auto plug, which means I can charge the unit anywhere I have a 12V outlet.
The one useful feature that is missing is a shortcut to invoke a pre-configured action. Possible useful and potentially life-saving actions include:
The shortcut could be invoked by pressing the Action (-) key and holding it down for a few seconds, or even automatically, for example, if the base station loses wireless connectivity for more than 10 seconds. The user would need to configure the shortcut action ahead of time. BTW, I've filed a feature request for this with Raymarine.

Based on my tests walking around the marina and shouting at crew standing at the helm, I measured the range to be over 20m (60’). A boat speed of 6 knots equates to 3 m/second, which means if you fell overboard with your remote handy, you have about about 7 seconds to turn the boat around.

My only other complaint is that the remote is rather hefty; a lighter, more compact device would be an improvement.

So does the freedom to tweak your course and monitor vital information whenever you're out on deck justify the Smart Controller's US $570 cost? Absolutely, yes!