Tech: Arriba gets a spinnaker 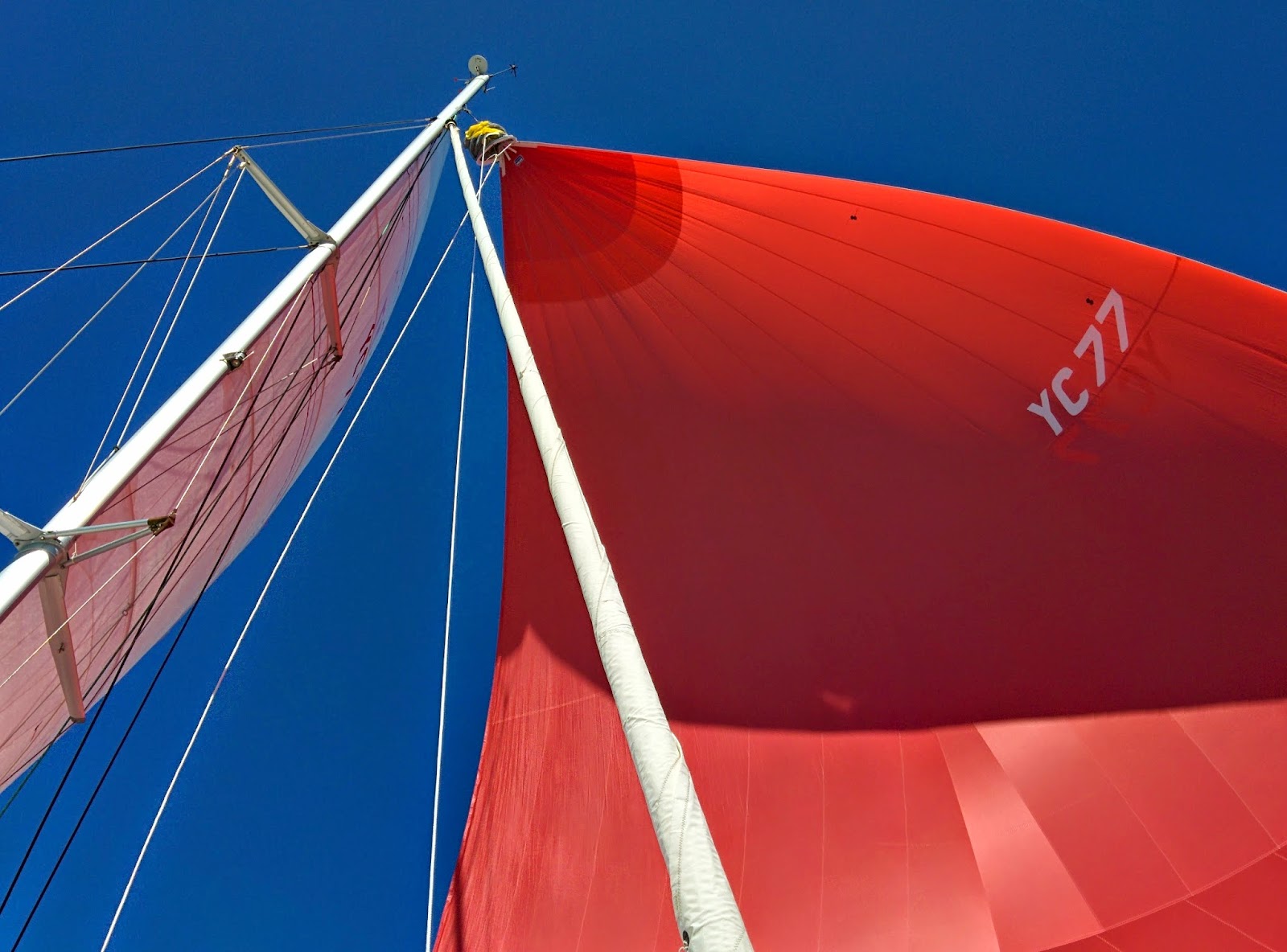 Everyone knows that a “kite” is something flown in the wind at the end of a line, but in sailing parlance it’s the term for a “spinnaker” sail. I admit I was part confused, part annoyed the first time I heard "kite" used this way. Seriously, what are we going to do when we have kite-powered sailing vessels, similar to this?  As it is, we're calling kites “sails” and sails “kites” which is too weird!

Anyway Dictionary.com defines a spinnaker as:


“a large, usually triangular sail carried by a yacht as a headsail when running before the wind or when the wind is abaft the beam.”

The term originates from “Sphinx”, the name of the first yacht to make regular use of this sail, and dates to 1865. Thank goodness someone had the good sense not to call them “sphinxters” though!

Spinnakers are meant for going downwind, or mostly downwind, and it was the long downwind leg of the Adelaide to Port Lincoln race in February which roused my spinnaker envy. So I promised to myself then I would treat Arriba to a spinnaker and now she does.

Sailors know there’s more to a spinnaker than simply being a large headsail. After all, a genoa is a large headsail too. The key difference is that a genoa, along with its smaller cousin, a jib, is a “staysail.” This is a sail with its luff, the forward edge of the sail, attached to a wire known as the “stay”. On the other hand, a spinnaker is a “flying sail”, i.e., a headsail which is not attached to a stay and therefore flies out in front of the vessel. Then there is also the gennaker, a cross between a genoa and a spinnaker, which uses a soft furler without a stay. Arriba now has a full complement of all of the above.
Sailors and non-sailors alike love the sight of spinnakers, as they balloon out in beautifully front of the vessel, often adorned with brightly colored designs. As you see, Arriba’s spinnaker is bright red and certainly hard to miss!

I’m a complete spinnaker newbie, but here’s what I’ve learned so far. First, there are two main categories of spinnakers, symmetric and asymmetric depending on whether the sail is symmetrical with respect to the longitudinal plane of the vessel or not. Symmetric spinnakers are excellent when running straight down wind, but less suited to reaches. Asymmetric spinnakers operate more like a staysail, generating lift from the side, which means they are a better choice on reaching courses, such as a beam reach. On a catamaran, an asymmetric spinnaker has the advantage of not requiring the use of a spinnaker pole, as the tack can be attached to the bowsprit. This is the type that Arriba now carries.

Today I sailed Arriba's new spinnaker with Luke Burrow the sailmaker from Bravo Sails. We had flat seas and light winds, in other words perfect conditions for our sea trials. At 106 m^2, the spinnaker's area is more than twice the area of Arriba's mainsail, and that huge area means massive power. We achieved 7.2 knots boat speed in 12 knots of wind on a beam reach.

The procedure for raising the spinnaker is simple.  The whole spinnaker fits into a large cylindrical sock known as a dousing sock shown below.

Just hoist the sock with the wind abaft at 160° with both sheets loose, then head up to about 120° before tightening the active sheet. That's it! It's simple enough to perform singled handed with the help of an autopilot to hold course - something I will try next time.

Here's a very short video of the action.